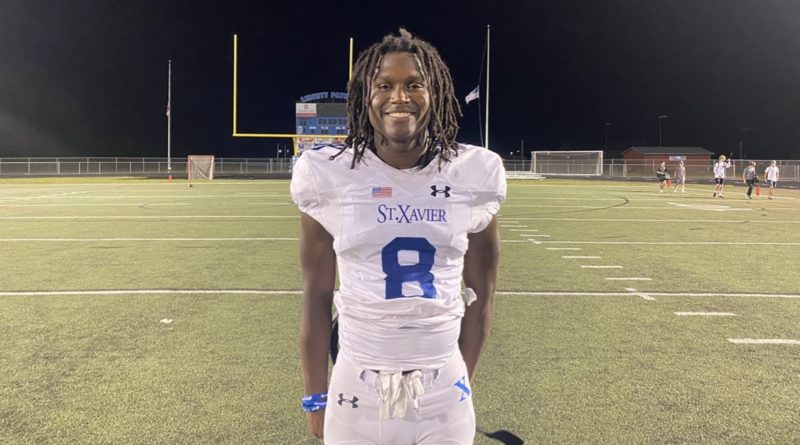 POWELL, Ohio — Defending D-I state champ St. Xavier showed no rust from its two-hour trip to Olentangy Liberty, racing to a huge halftime lead and then giving its starters a rest.

The Bombers showed no mercy to the Patriots in the first half, building a 42-0 lead that led to a running clock in the second half and a 49-0 victory.

St. Xavier’s defense held Liberty to just four first downs and 45 yards of offense, while the Bombers racked up 318.

“We felt very good about our matchup on receivers, but we were nervous about the running backs, and the quarterback could run,” St. Xavier coach Steve Specht said. “I think our guys did a great job containing the quarterback every time he tried to run.”

From the kickoff, St. Xavier established its dominance.

After a quick score and then a turnover on downs by Liberty, St. Xavier receiver Terrell McFarlin (pictured above) scored the Bombers’ second touchdown in a two-minute span to take a 14-0 lead.

“We only had 40 minutes to warm up coming off of a two-hour bus ride, and we didn’t expect to do that good,” McFarlin said. “We were watching the film and we knew we could handle those guys. We just focused on stopping the run tonight.”

In the second quarter, the Patriots’ defense showed some signs of life, with a tackle for a 5-yard loss and then nearly a pick-six, and finally forcing a rare St. Xavier fourth down.

But running back Charles Kellom scored on fourth and goal from the 3-yard line to make it 21-0, and the rout was on.

Tight end Max Klare (Duke commit) grabbed a 23-yard touchdown catch, and then the St. Xavier defense got a score of its own after a Patriots fumble into the end zone at the end of the half (and effectively the game).

McFarlin led the offense with 105 receiving yards and two touchdowns on five receptions, while Liberty’s receivers combined for just 32 yards.

“Terrell had a tremendous year as a junior, but he was always in the shadow of two seniors that graduated,” Specht said. “I told Terrell early into the year ‘you need to be the guy,’ and he’s done that. He leads by example and I’m really proud of him.”

The entire second half was played with a running clock.

St. Xavier defensive back Joe Nelson’s 67-yard interception return for a touchdown in the fourth quarter brought the final score of 49-0.

Senior quarterback Brogan McCaughey completed 13 of 14 passes for 236 yards and three touchdowns. Kellom was St. Xavier’s leading rusher with 54 yards and a touchdown on 14 carries.

“In games like this, your big players have to play big,” Specht said. “Max Klare, Terrell and Brogan are those players. Brogan’s a tremendous quarterback, and he was our starting quarterback on our state championship run. He tied a state championship record with four touchdown passes last year so we were expecting those big things from him tonight.”

St. Xavier has not lost a game since Sept. 18, 2020, against Cathedral (Indiana). Through three games this season, the Bombers have scored 122 points while giving up just 21.

Next week, St. Xavier (3-0) will face off against Indiana’s Penn Kingsmen while Olentangy Liberty (1-2) looks to bounce back at home against Olentangy Berlin.