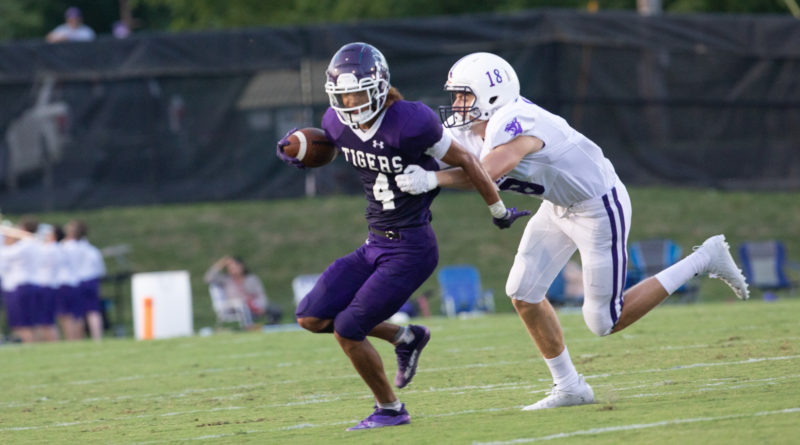 Ohio high school football made it onto the national stage last weekend when Bishop Sycamore got roasted by IMG Academy.

If this was a movie, we would see a rematch of the two schools in 10 weeks with Bishop Sycamore coming from behind to upset the football factory from Brandenton, Florida.

But this is real life, and Bishop Sycamore is barely real Ohio football. Want to see what real Ohio high school football is? Here is SBLive’s Top 25. The rankings include all classifications.

The Bombers dominated the first two quarters over Colerain, cementing themselves as the team to beat in D-I with a 42-7 victory. Senior QB Brogan McCaughey threw for 185 yards and three touchdowns.

Can’t take too much away from the Knights after falling to 17-time state champion Bergen Catholic out of New Jersey. Their game against Walsh Jesuit on Friday will give us a better picture of Hoban’s ability to repeat as D-II state champions.

The Cardinals fought off a hungry St. Ignatius squad en route to a 28-26 victory on Friday. Evan Harper and Mikey Norwood tallied over 100 yards receiving each on the night. Their next opponent is coming up shortly on this list.

The most suffocating defense in the state did what they do best against Elder. The Tigers have well established themselves as the best team in the Columbus area.

The Eagles put up 35 points in the first quarter, cruising to an easy win over Rock Creek Christian from Maryland. Their Week 3 contest against Mentor is likely a preview of the Region 1 final.

After a 24-20 win in Week 1 against St. Ignatius, the Wildcats have two straight bye weeks as contests against Fairfield and Trotwood-Madison have been canceled. No word on a makeup opponent for Week 3 as of this writing.

Staying in D-II, La Salle was led by running back and future Indiana Hoosier Gi’Bran Payne in their 21-7 win over Winton Woods. The Lancers look to avenge the state of Ohio as they face IMG Academy this coming week.

After an opening-week loss to St. X, the Firebirds came back with a vengeance with a 45-7 win over West Clermont. The easy part of their schedule continues with a road game against Oak Hills on Friday.

Despite falling in their first two games, the Wildcats have shown they will be in the state championship conversation this season. Losing to two top-six teams, both on the road, by a combined six points is nothing to talk down about.

Penn State commit Drew Allar tallied 350 yards of offense and four touchdowns to improve the Battling Bees to 2-0 on the season. This win opens up their path of being undefeated when they face Mentor on Oct. 1.

Finally getting out of the top two divisions, the defending D-III champions picked up right where they left off, beating Buchtel 42-0. The Hilltoppers get fellow undefeated Ursuline this week.

The Shoremen, after a 2-0 start, must have Sept. 10 circled on their calendars. That is when they face rival Avon for the fifth time in three years. Avon Lake is 0-4 against Avon since 2019, 21-0 against all other opponents.

For the first time since September 2018, the Eagles suffered defeat in the regular season, snapping a streak of 24 straight regular-season wins. Avon will host Glenville this Friday.

If there were any questions about the Tigers after their huge loss to Pick Central, they answered them with a blowout win against GlenOak. Willtrell Hartson led the way with 167 rushing yards on 21 carries.

Another team that has a loss to Pick Central, the Panthers were in the game up until a long drive was uprooted by an untimely fumble, recovered by Pick Central in the middle of the fourth. It was all PCHS from there.

Putting up 95 points in the first two weeks gets this D-III school some love in our Top 25. The dominant performances make the Greenmen the most likely team to upend Chardon’s hopes of a repeat state championship.

When your only loss in 2020 was to the eventual state champions, you get the benefit of the doubt. The Explorers are undefeated in this young 2021 season, but they need to do something about their defensive woes, allowing 69 points in their first two games.

Holy moly! Nobody saw the Big Red’s 41-7 win over New Philadelphia coming. Steubenville’s 516 yards of total offense along with four takeaways were the keys to the big victory last Thursday.

Senior CeeJay Yarboro threw for 253 yards and two touchdowns as the Bengals stayed undefeated on the season, defeating Toledo Central Catholic 24-14. Their schedule gets much easier with Cleveland Central Catholic this Friday.

After a woeful 2020 campaign, the Crusaders are back where they expect to be, undefeated after the first two weeks. Things don’t get any easier though, as they have the meat of their schedule coming up in September with East Central, St. X and La Salle all on the calendar.

Canton McKinley gave the Falcons everything they had through three quarters on Friday. However, Austintown-Fitch pulled away in the fourth to secure a 42-28 victory. Next up, another D-I school in GlenOak.

The Vikings scored 56 points in the first half against Loveland on Saturday morning, inducing the running clock in their blowout win against the Tigers. Their Week 3 game against Hamilton has been canceled with no replacement as of this writing.

Dublin Coffman was expected to be one of the top teams in the Columbus area this season. That prospect is out the window after the Spartans dominated for 48 minutes, winning 35-7.

The Warriors are 2-0 for the first time since 2018 following a nail-biter against Reynoldsburg, 17-15. Wayne will face Canton McKinley this Friday in their home opener.

This is awkward. The Fighting Irish have multiple losses for the first time since 2017 when they finished 11-3 en route to a state semifinals appearance. That was also when they were a D-III school. TCC should get into the win column this Friday at Olentangy Orange.