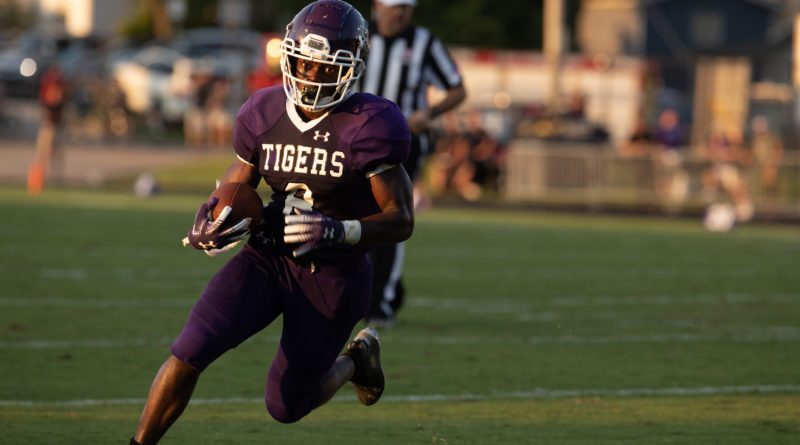 Pickerington Central’s home opener came against a formidable foe, but the Tigers beat Cincinnati Elder 28-10 on Friday night at Tiger Stadium thanks to a strong finish and even stronger defense.

“A lot of times it just ends up being a stalemate for a couple of quarters,” Pickerington Central coach Jay Sharrett said. “That’s how this game played out, and fortunately we got a couple of turnovers.”

Although it looked like anybody’s game throughout, the Tigers sealed their victory in the waning minutes.

Olando Kamara took a third-and-15 handoff from quarterback Braden Mantooth, lateraled it to receiver Kasey Middendorf, who threw to Derek Grimes for a touchdown, making it 21-10 Pickerington Central with 5:38 left in the game.

Then after an Elder interception, Kamara scored an 8-yard touchdown run and just like that, a close 14-10 game turned into a 28-10 Pickerington Central victory.

“I’m pretty satisfied with today’s win. I thought we could do better but we executed out the win,” Kamara said. “Coach was just telling us we’ve got to score one more point than them to come out on top.”

Neither team played its best, with turnovers and penalties slowing down the game, but Pickerington Central held Elder to just 146 yards of offense.

On just the second play of the game, the Panthers got the ball at the 25-yard line after a fumble recovery by linebacker Andrew Spinney, but Elder could advance just 10 yards before settling for a field goal.

The Tigers struggled to get their offense going in the first half, but an interception by defensive back Isaiah Henderson turned around the game, setting up a 10-yard touchdown rush by Kamara to give the Tigers a 7-3 lead in the second quarter.

“Our senior captains have brought this team to a different level when you talk about camaraderie,” Pickerington Central coach Jay Sharrett said. “When you’re in a dogfight like this (against) a quality team like Elder, if you unravel and panic, you lose the game. We didn’t, and we won the game.”

Central began to gain momentum when Mantooth completed a 10-yard touchdown pass to Middendorf to take a 14-3 lead into halftime.

The Panthers received the kickoff to start the third quarter and pushed to the red zone before turning over the ball on downs at the 3-yard line.

In the final minute of the third quarter, Ben Hambleton threw a 55-yard bullet downfield to receiver Andrew Harp for a touchdown to make it a four-point game.

“This is our second tough ballgame in a row,” Sharrett said. “We had Massillon and then we had Elder. Those guys have won state championships before, and they know how to win. They’re not going to give you the game. You have to wrestle it from them.”

Next week, Central will face North Allegheny (Pennsylvania) at home while Elder hopes to bounce back against St. Mary’s (Missouri).