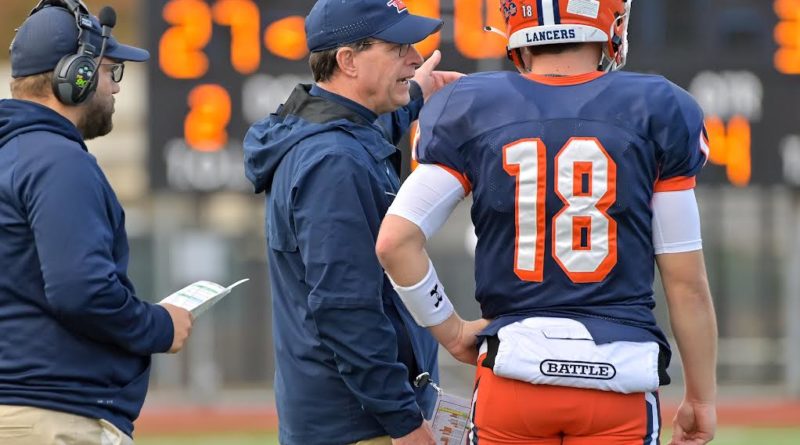 LAKEWOOD – Dave Miller knows the season just doesn’t feel right at Lakes High School if the Lancers aren’t in the field for the Class 3A state football playoffs.

Justin Brennan connected with David Wells Jr. on a long tiebreaking touchdown pass just seconds into the second half, and the Lakes defense forced two second-half turnovers to turn away 3A Wesco champion Monroe, 28-14, in a round-of-32 game Saturday afternoon at Harry E. Lang Stadium.

Monroe erased a 14-0 deficit on two Blake Springer touchdown passes to Cole Pruett, who finished with a game-high 14 receptions for 160 yards.

Lakes, the No. 3 seed out of the 3A Pierce County League, advanced to the state tournament for a third consecutive season. It lost in the opening rounds in 2018 (Yelm) and 2019 (Bellevue).

“It was a great battle,” said Miller, the Lancers’ longtime coach. “Monroe is a really good team that is well-coached. They are scrappy with a lot of really good football players.

“We just had to hang in there. I am so proud of our kids. They’ve done what they’ve done all year – they overcome adversity.”

Here are four observations from the Lakes-Monroe game:

THE SPRINGER-PRUETT CONNECTION WAS UNSTOPPABLE

Late this season, second-year Monroe coach Scott Darrow handed the keys of his offense over to sophomore quarterback Blake Springer.

And Springer certainly knows who to get the football to – the shifty Pruett, who is the league’s top receiver.

Facing a 14-0 deficit early in the second quarter, Springer faced a fourth-and-goal play, rolled out and waited for Pruett to flash open. He delivered a 4-yard touchdown strike to cut the Lakes lead in half at the 10:30 mark.

And after the Bearcats’ defense forced a quick three-and-out, Monroe went 75 yards in 10 plays – capped by Springer to Pruett for 9 yards to tie it at 14-14 with 4:31 remaining in the first half.

In all, Pruett was targeted on 22 of Springer’s 33 pass attempts – and another time on Kody Edelbrock’s halfback pass.

“Those two (Springer and Pruett) work well together,” Darrow said. “Cole is a stud. He’s a beast.”

Blowing a two-touchdown lead in the final 10 minutes of the half isn’t going to make any halftime locker room cheery – but the Lancers regrouped quickly – and struck in rapid-fire fashion.

This week in practice, Lakes put in a new look – trips formation with Wells in the slot – to get the junior a clear middle-of-the-field angle on a post route.

“We felt with the safety rolling down, we could get behind him,” Miller said.

On the second play of the half, Brennan wound up that big arm and let it fly from near his own end zone – and hit Wells in stride near midfield.

The rest was left to Wells, who broke away from the defender and sprinted home on a 78-yard touchdown play. It gave Lakes the lead for good – 21-14 – just 42 seconds into the second half.

“Coming out, we needed a big momentum changer,” Brennan said. “And that was it.”

Wells caught four passes for 100 yards, and Brennan was 8-for-17 for 174 yards, but also had 44 rushing yards, making a few key third-down conversions.

There was a time when defensive tackle Howard Golden wasn’t sure he was going to have a senior season.

He wasn’t even with the team last spring, instead moving to Texas where he did not play football.

Golden returned to the area in the summer, and had to appeal to the West Central District eligibility board to get reinstated with Lakes – which he did,

And the Lancers are certainly grateful he’s part of this run to the playoffs.

“He just makes plays,” Lakes linebacker Michael Westbrook Jr. said. “And they were big ones today.”

Weighing 255 pounds, Golden is the team’s short-yardage back – and he scored a pair of touchdowns on short runs – the final one a 2-yarder that gave Lakes a 28-14 lead with 6:19 to go.

But his biggest contributions came on defense, particularly on fourth down.

With Monroe marching for a game-tying score late in the third quarter, the Bearcats went for it on fourth and 4 from the Lakes 17-yard line.

Springer tried hitting a receiver on a crossing pattern, but Golden – who dropped back into coverage – got his big paw on the pass to swat it away.

“Coach lets us make our calls sometimes to make a play,” Golden said.

The Bearcats went for it on fourth and 1 on their next drive just past midfield, but Edelbrock was stuffed on an inside run by the Lakes big man.

WESTBROOK LIKES TO OPEN AND CLOSE THE SHOW

Darrow is an aggressive play-caller for the Bearcats – and went for it on fourth and 4 from their own 41-yard line on the game’s opening series.

Westbrook was having none of it – he sacked Springer for a 10-yard loss, and that set up the first Lakes score.

“He makes our defense a lot better,” Miller said.

With Monroe still trailing by a touchdown with 71/2 minutes remaining, the Lakes defense forced Springer into a mistake – a Westbrook interception near the sideline that he returned to the Bearcats’ 17.

“Right before the play, coach told me to bait the blitz,” Westbrook said. “I immediately dropped back to the flat … and was right there. It went right into my hands.”

Westbrook led the team in tackles Saturday, and seems to have a knack to make big plays at the most crucial moments.

“I just do my assignments, and play hard and play smart,” Westbrook said. “That is what all of us are doing.”