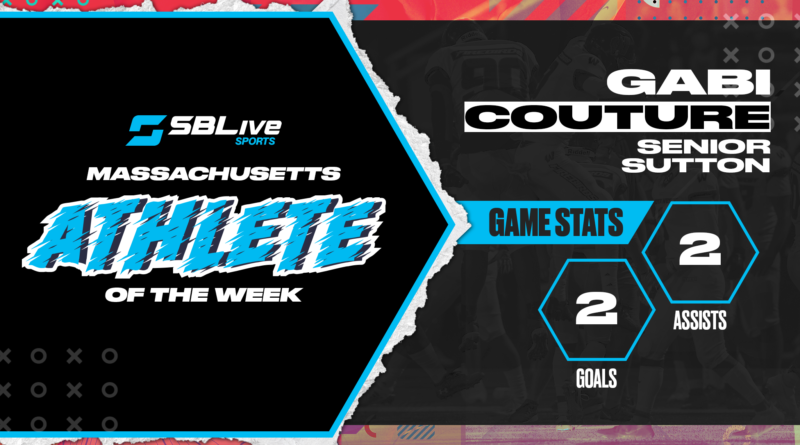 The senior netted two goals and two assists to lead Sutton to a 7-0 win over Maynard.

Couture ran away with this week’s honor, receiving 63.44% of the total vote.

Gnaidek made five saves to earn her ninth shutout of the season in Doherty’s 2-0 win over Grafton.

Candela scored two goals to lead Algonquin to a 4-0 win over Wachusett.

Boyce ran for two touchdowns and passed for another TD to lead Northbridge to a 36-0 win over Tantasqua.

Dimon rushed for three touchdowns to lead Grafton to a 24-6 win over Shrewsbury.

Hannagan rushed 25 times for 222 yards and four touchdowns in Littleton’s 35-14 win over Tyngsboro.

Hirsh carried the ball 10 times for 102 yards and a touchdown and picked off a pass on defense in Maynard’s 27-21 OT win over North Middlesex.

Lockbaum had a rushing TD and returned a fumble 26 yards for a TD in Doherty’s 37-8 win over South.

Lopriore carried the ball 24 times for 125 yards and a TD on offense and had 13 tackles on defense to lead Assabet to a 42-0 win over Bay Path.

Rosario rushed for three touchdowns – including explosion plays of 78 and 45 yards – to lead Leicester to a 42-34 win over Millbury. He also had an 85-yard kickoff return and he intercepted a pass on defense.

Shepherd passed for 330 yards and four touchdowns to lead Quaboag to a 46-8 win over Quabbin.

Stemple rushed 19 times for 110 yards and the only TD of the game in Marlborough’s 7-0 win over Nashoba.

Sullivan carried the ball 24 times for 180 yards and two touchdowns to lead Scituate to a 21-13 win over rival Hanover. He also had two receptions for 30 yards and scored a key two-point conversion.

Toussaint had a scoop-and-score 55-yard fumble return for a touchdown in Algonquin’s 28-0 win over Leominster.