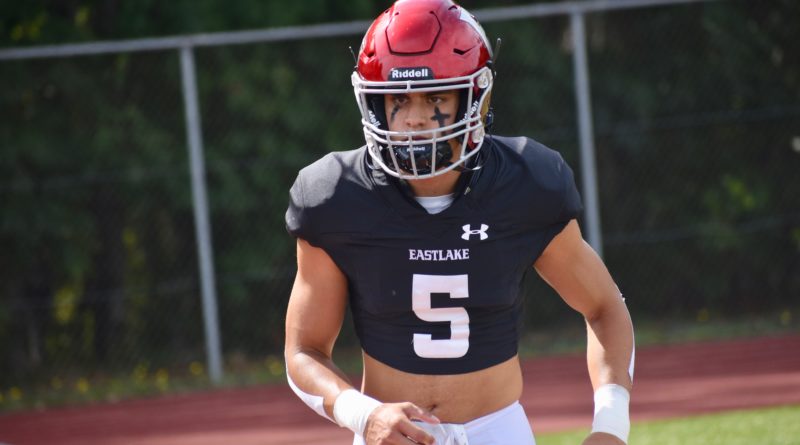 SAMMAMISH – Noah Weintraub kicked the go-ahead and lead-extending field goals, and Will Eaton enjoyed a big night in his return from an injury that doctors initially thought would end the senior’s high school career as eighth-ranked Eastlake celebrated their seniors with a 27-20 victory over visiting Mount Si on Friday night.

It was the first time in three weeks that the Wolves had been seriously challenged after consecutive 30-plus point blowout victories over Redmond and Skyline.

“That’s our third game this year that’s been a 10-point or less,” Eastlake coach Kyle Snell said. “So, we’ve been in really close ones or it’s been not-so-close ones. Coach (Jay) Tully just said to me, ‘That was really good for us – again.’ Those games where we get tested, you’re playing a really good opponent, those games are good for us.”

Here are four observations from the Eastlake-Mount Si game:

EVERYBODY NEEDS A BREAK SOMETIMES

In addition to the Weintraub and Eaton performances, Eastlake caught a potential break with just over three minutes remaining when a possible turnover near midfield went its way, and the Wolves kept the ball.

Jack Peterson had run for 17 yards and looked to have fumbled the ball. The officials huddled, but awarded a first down instead of a turnover at the Eastlake 46.

On the very next play, quarterback Parker Barrysmith connected with Eaton, who jumped over a Wildcats defender to make a huge 41-yard catch. Three plays later, Weintraub made his second field goal of the game to extend the advantage to 27-20 with 4 minutes, 58 seconds to go.

“We get the turnover right there,” Mount Si coach Charlie Kinnune said, “And the referee came over and told me, That’s on me and I’m sorry.’ We get that and it’s a different ballgame. We’re down by four, and maybe we win, so …”

Instead, Eaton and Weintraub added to their big nights.

Eaton had seen his doctor on Monday. After a nearly two-hour consult, the senior receiver said, and with his mother’s approval, Eaton was cleared to play on Senior Night. Just five weeks earlier, against Rainier Beach, Eaton had broken left collarbone.

What should have been an eight-month recovery, Eaton accomplished in those weeks.

Once cleared, Eaton took advantage of his opportunity. He took a hit on the Wolves very first offensive play and felt no pain.

Then he went out and caught six passes for 106 yards and a touchdown, including the big 41-yarder to help keep his team unbeaten at 7-0 overall, 4-0 in KingCo 4A.

“We actually thought we’d get Griffin Miller over the middle,” Snell said. “They didn’t and Parker made a good read and had single coverage on Will. It’s nice to have Will back. He presents a challenge for teams.”

With just a road game left at Issaquah, which hadn’t won a KingCo game entering this weekend (2-4, 0-3), Eastlake’s victory secured the 4A KingCo Crest Division title and assured it of a home crossover game against the winner of the Crown Division (Bothell).

The Wolves will host Bothell, which secured the Crown with a 31-21 win over Woodinville on Friday, on Oct. 28 for the KingCo title and No. 1 seed to the playoffs.

“If it is, and it’s a rematch of 2019, I hope it goes better for us than that one did,” Snell said, before the Bothell score became final. The Cougars came to Eastlake on Halloween night and walked away with a 47-24 victory two years ago.

Had Mount Si pulled out a win, the Wildcats (4-3, 2-2) still had a chance to win the Crest. Instead, they will play the No. 2 team from the Crest in two weeks, Woodinville.

“You think about the three losses we have,” Kinnune said. “Yelm, who’s ranked high. Bothell, who was No. 2. These guys were No. 2. We’re as good as anybody in the state. We’ll compete with anybody.”