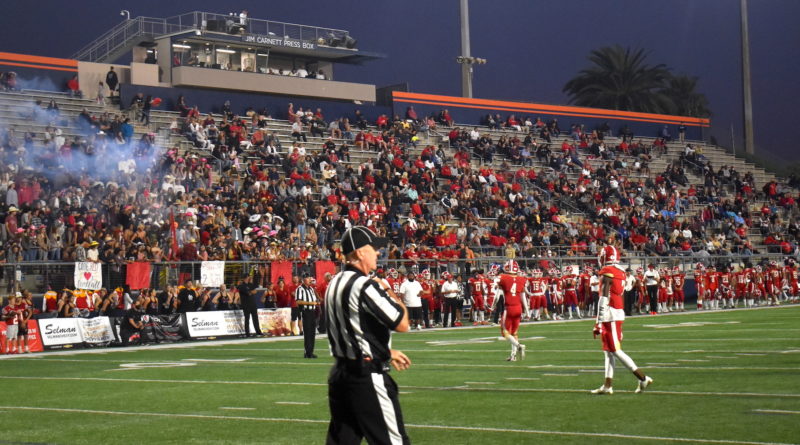 COSTA MESA– After both teams got on the board within the first five minutes of the game, it was the defenses that stole the show in Orange Lutheran’s 23-21 win against Edison on Friday.

The Chargers were on the verge of sealing it late in the fourth quarter with the lead and the ball deep in OLu territory, but the Lancers made a late push to win it. Here are five takeaways from the game:

This duel featured two evenly-matched squads with formidable O-lines and multiple D-1 caliber skill guys. Both offenses were in solid form in this one, but it was still fairly low-scoring because both defenses absolutely came to play. There weren’t many specific defensive highlights or individual performances to point to because things were just clicking team-wide for both defenses. But the offenses had to work for everything they got, and that wasn’t a ton.

With a little over half of the fourth quarter gone, Edison led 21-20 with the ball just a couple yards from the end zone. But OLu put together an impressive goal line stand and turned the Chargers over on downs, and then began a final drive from its own one-yard line.

Orange Lutheran kicker Dieter Kelly started the night smoothly, going 2/2 on PATs in the first half. Then he missed one with 11:13 left in the fourth quarter that left the Lancers trailing by one point after a Desmin Jackson touchdown. But that didn’t phase him when the game was on the line. With OLu trailing 21-20 with 56 seconds to play, he sunk a 34-yarder on a fourth down, and the Lancers’ defense had little trouble putting on the finishing touches.

QB Logan Gonzalez and RB/SB Desmin Jackson carried a heavy load for Orange Lutheran on offense, including in the clutch. Gonzalez threw for 270 yards and two touchdowns on 18-26 completion, and his 37-yard completion to Jaylen Lynch from OLu’s end zone on their final drive was arguably the offensive play of the game. Jackson caught for a touchdown, rushed for a touchdown, and totaled 191 yards of offense, including a 29-yard catch to help set up Kelly’s game-winner. Hayden Faraday also had a touchdown catch for the Lancers.

Edison QB Parker Awad threw for 157 yards and two touchdowns coming to Peyton Gregory and Austin Grbic, who was also a force at DE. Tucker Tripp was the Chargers’ leading receiver in terms of yardage, and made multiple catches in traffic with a high degree of difficulty. Troy Fletcher led Edison’s ground attack with a rushing touchdown. Nico Brown didn’t have a huge night running the ball, but he did have a long kickoff return into OLu’s red zone to set up Edison’s first touchdown.

EDISON’S STOCK NO WORSE FOR WEAR

The Chargers took on the challenge of playing two Trinity League teams and elite programs in their first three games. This loss drops them to 1-2, and has to sting after they came so close to pulling out the win, but this was still an impressive showing. It was very evident on Friday that two outstanding, well-rounded squads had come to play, and of course, only one could win.

Only three weeks into the season, Orange Lutheran has already played three clear Division 2 playoff teams – and multiple with an outside shot at a Division 1 push – in Serra (Gardena), Upland, and Edison.

And the Lancers’ schedule is essentially only going to get harder. They face another projected Division 2 playoff threat in Damien, then Notre Dame (Sherman Oaks) of the Mission League, and then dive right into the Trinity League gauntlet with Servite, Mater Dei, and St. John Bosco.

Their 3-0 start against this caliber of competition not only practically guarantees a Division 2 birth, but also gives them some major padding around league play in terms of making the Division 1 bracket. With OLu playing at this level, it’s a legitimate possibility that five Trinity League teams end up in Division 1 this year.