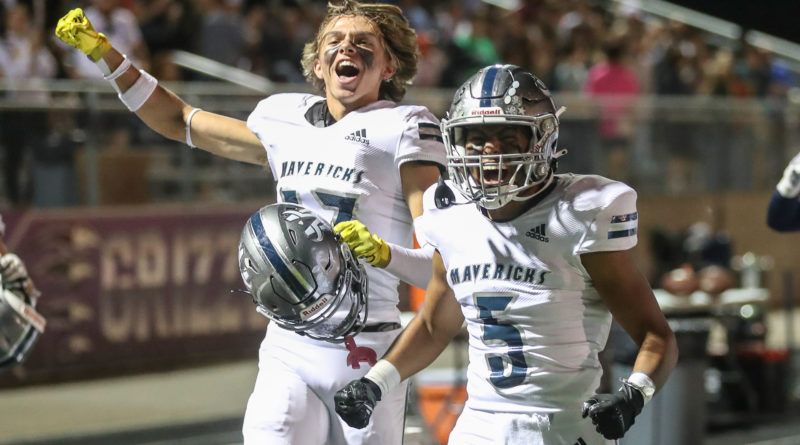 MERIDIAN – Judd Benedick was the first one to touch and hoist up the axe.

It was also long overdue.

Visiting fifth-ranked Mountain View was victorious in the “Battle for the Mountains” for the first time since its inception in 2018 with a 26-20 win over No. 1 and reigning state champion Rocky Mountain on Friday night at Brighton Stadium.

Oddly enough, it was a parent of one of Benedick’s former players who designed the axe trophy.

“He was here tonight,” Benedick said. “He said, ‘Boy, I sure hope you get that thing. I made that for you guys.'”

The Mavericks (2-0) also snapped the Grizzlies’ 29-game winning streak against 5A Southern Idaho Conference opponents in the process. The last time Rocky Mountain lost to a team from the league was back on Sept. 29, 2017. It fell to Borah, 7-6. that day. The last time Mountain View had gotten the better of its crosstown rivals was two weeks earlier that year.

“This is definitely big for us, and we’re super excited about it,” Mountain View senior linebacker Brayden Garrison said. “Rocky’s no slouch. That’s one of the toughest teams in the state every single year.

“But we know we’re not done. We know that’s nice, but we’ll definitely be seeing these boys again.”

Garrison helped preserve the win. After Rocky Mountain had taken back the momentum with a 65-yard interception returns for a touchdown by junior defensive back Troy Wilkey and had shut out the Mountain View offense in the second half, it was driving for a go-ahead score.

The Grizzlies had the ball at the Maverick 12-yard line, trailing 26-20 with a little more than five minutes remaining. On fourth down, Rocky Mountain junior quarterback Tegan Sweaney stepped up in the pocket and threw a pass down the middle of the field towards the end zone. But Garrison leapt high in the air and swatted it safely down to the turf to force a turnover on downs.

“This guy makes plays all over the field, all the time, every game,” Benedick said. “He is sort of my security blanket. I just know he’s gonna get it done.

“It doesn’t matter. Somehow, some way, he’s going to be around the ball and make the play.”

It was part of a Mountain View defensive effort that for the second consecutive week didn’t allow an opposing offense to score in the second half.

“The guys just have a mindset to them that they’re not gonna give one up,” Benedick said. “They’re going to make people earn it and not going to give up the big play. If somebody does score on us, they’re gonna have to fight to get it.”

Following the defensive stand, the Mavericks put it on senior running back Quintez Evans – literally. Evans, who missed most of the second half with cramps, returned in the final series with 11 consecutive carries to end the game, including a 12-yard run on a third-and-7 with 51 seconds to go to ice the game. Evans finished with 184 yards and two touchdowns on 30 carries.

“I just knew my team needed me,” Evans said. “All of our running backs can get it done. But I didn’t want to have that feeling in my stomach tomorrow morning, so I was like, ‘I need to get my butt back in.’”

Junior quarterback Dawson Wahl went 8-of-14 for 106 yards and a TD, while senior Dominic Sotomayer hauled in four of those passes for 85 yards for the Mavericks, who stunned Rocky Mountain in the first half by jumping out to a 19-0 lead.

Wahl threw a 10-yard touchdown pass to senior tight end Mason Ashby on his team’s opening drive of the game. Mountain View doubled up its lead on a 44-yard run by Evans on fourth-and-short on the first play of the second quarter before a 92-yard return on a blocked field goal by sophomore Owen McBride made it 19-0 Mavericks at the 7:39 mark of the second quarter.

“It was super nice having the momentum early because last week we got shut out in the first half,” Garrison said.”It was a little different perspective than last week.”

The Grizzlies did cut the deficit down to 19-13 with 2:42 remaining on a pair of touchdown passes from Sweaney to junior tight end Luke Hanchett. Sweaney hit Hanchett on a 4-yard pass before finding him again on a 6-yard shovel pass after the Grizzlies recovered a dropped lateral pass.

But Mountain View got the momentum back right before the break. It went 85 yards in just six plays with Evans scoring his second touchdown of the half on a 10-yard run to put the Mavericks up 26-13 with 54 seconds remaining.