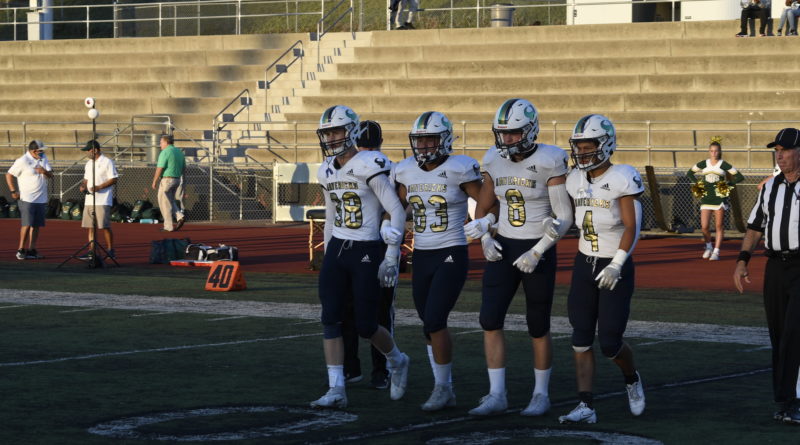 VISTA — La Costa Canyon was cruising on all cylinders in their second game of the season on Thursday night, moving the ball at will in a 56-26 non-league win over Vista. The Mavericks looked like a new team after falling to Tesoro last week and will look to keep their winning ways up with San Clemente and Mission Hills looming in the coming weeks.

It’s tough to say that La Costa Canyon’s first half offensive output could’ve gone any better against Vista on Thursday. They scored a touchdown on each of their first five possessions and had moved the ball into the red zone as the second quarter clock expired on their sixth drive.

For good measure after La Costa Canyon recovered the short kickoff to begin the second half, Conor Buechs took the handoff on the first play from scrimmage and went 61 yards for the sixth touchdown of the night.

With the Mavericks building a 30-plus point lead for much of the second half it allowed the staff a chance to get playing time for many further down the depth chart that wouldn’t typically be in.

“Our starters celebrating the success of the third and fourth string guys, that’s what I liked,” La Costa Canyon heach coach Sean Sovacool said. “We got our fourth string nose guard, cheerleaders on the sideline chanting his name and a running clock, that’s what really stood out to me. These guys really care about each other, they love each other, and they celebrate each other’s success.”

The Mavericks even shared the load when it came to scoring, getting eight touchdowns from seven different players.

“And then spreading the ball around, we do that by design” Sovacool said. “We have a glance sheet, and we chart who gets the ball, how many times and if it’s positive or negative. When you have 71 kids, you utilize them.”

Early in the second quarter, La Costa Canyon extended their lead to 21-0 after Christian Reynolds was able to break loose and scamper into the end zone for the Mavericks. Vista responded right back with junior running back Derek McClintic busting through the right side of the line on his way to a 76-yard touchdown rush.

The Mavericks wasted no time returning the favor when freshman standout CJ Williams collected the kickoff and sprinted up the Mavericks sideline on his way to his first varsity touchdown, likely breaking the spirit of Vista and their run heavy offense that isn’t geared for comebacks.

The opening week of the high school football season wasn’t as kind to the Mavericks, who lost their home opener to Tesoro, 17-7. Less than a week later, La Costa Canyon was able to get the bad taste of a loss in their season debut out of their mouth.

“It was absolutely critical,” Sean Sovacool said. “That was a tough pill to swallow last week especially knowing how capable we are on offense and only scoring once, on the opening drive, is not us we’re much better than that.”

A fast start and an efficient offensive attack from La Costa Canyon kept the Panthers on their heels throughout the first three quarters.

“We were really successful on first down and if it wasn’t a first down it was a second and short and keeping us ahead of the chains,” Sovacool said.