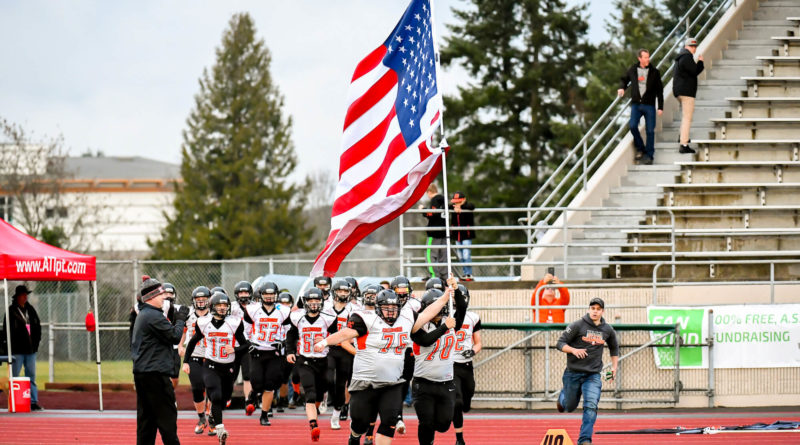 More than 20 months have passed since the last champion was crowned. And it’s been nearly six years since any school outside the Southwest District has brought home the gold ball.

Based on talent and big-game experience – this is the best team in the state. Dual-threat all-state QB Jackson Esary (1,863 combined passing and rushing yards in five games last spring) would be a star at any level, and he has big-play teammates all over the field in RB Bradley O’Neil and WRs Jack Doerty and Max Cox. Biggest question is when games gets physical, can Chinooks be bullish and find defensive stops?

Yes, the Southwest District spring champions lost a lot, notably big-play QB Laythan Demarest. But there should not be a big drop-off in production, especially with the linemen depth the Tigers have, led by USC signee Keith Olson. With that luxury, they can run it with RB Gavin Parker, or open it up with new QB Ashton Demarest, who is a better passer than his brother, and has speedy WR Lucas Dahl as a deep threat.

They are still the reigning 2B champions, and won’t go away quietly. And while they don’t have offensive-line numbers of the past two years – the Loggers have their entire trio of triple-option running backs returning, led by 1,000-yard rusher Marshall Haight, a senior. Onalaska has to still break in a new quarterback (Kayden Mozingo or Omar Cardenas), but team has won 18 of its past 19 games – and will be fine.

If there is a team set up to loosen the Southwest District’s statewide stranglehold – it is this back-to-back 2B champion (2014, 2015). And it starts with a formidable defensive line, led by beefy DTs Ty Morgan and Joseph Cates. If RB Ryden Zabreznik (played one game last spring) rebounds and has a big senior season in Okanogan’s wear-you-down Wing-T offense, look for the Bulldogs to stick around until December.

Here’s another former 1A squad that found instant success in the 2B ranks. And despite losing 12 seniors, the Spartans still boast an intriguing core. Three-year starting OL/LB Hayden Queen is the team’s best two-way player. And dual-threat QB Logan Olson, who moves from wide receiver, has bruising RBs Nate Dahlgren or Sloan Tumaua to hand off to, and scatback Dalton Kilmer to utilize in space.

In the mad-scramble 2B Northeast League, the Cougars are still the team to chase down. They lost all-state LB Kaden Krouse, but have an exciting big-play performer in RB Kruz Katzer (cousin of ex-Mount Spokane star/current WSU tailback Kannon Katzer) to lead the backfield. Team lost eight seniors on defense, but Cougars have plenty of emerging talent in the pipeline, including up-and-coming sophomore OL/DL Tyler Pettigrew.

Lots of potential here for first-year coach Brian Harrington to tap into, which is why you are going to see the Lancers switch up and run a multi-faceted offense. Returning QB Logan Wilson has a big arm, and will be asked to take shots downfield. And Liberty will have a pair of big-play threats out of the backfield in RBs Ashton Strobel (also an option QB) and Rainier transfer Jake Jeske, an all-state type talent.

Blown up by injuries last spring, the perennial 2B contenders had an off year in the 2B Central. One of the silver linings was the late-season emergence of QB Lane Johnson, who started the final two games and displays uncanny accuracy in the team’s short passing game. LBs Gabe Slape and Asher Guerrero are the strength of the defense, but the roster, while talented, is still mainly sophomores and ninth graders.

There are athletes everywhere at this small school – and the bulk of the Raiders’ talent is in the 2023 class. QB Hunter Whitelaw has graduated, but younger brother, Tanner, is expected to take over a RB workhorse role – if he can shake off an injury-filled spring season. And while new QB Brit Egbert doesn’t boast the big frame of past Lake Roosevelt signals callers, he is a run threat as well.

Never underestimate what coach Mike Christensen can get out of team, large or small in numbers. And even though the Indians graduated 13 seniors, they have a pair of two-way interior standouts in Joshhill Tilton and Austin Allen. Senior QB Wyatt Nef has natural leadership skills, but he is part of an unproven backfield that returns no touchdowns and less than 100 yards of offense from the spring season.