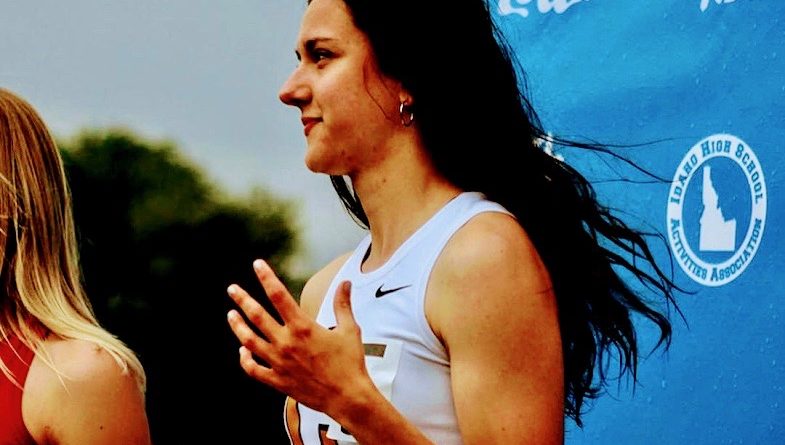 BOISE – Megan Rose broke down in tears upon her unexpected return to the Capital High School track in June to train for one more race.

It was the alum’s first time back there since etching her name into the books for one of Idaho’s most sought-after girls sprinting records weeks earlier at the IHSAA meet.

For Rose, that track is much more than the latex on the surface and the asphalt underneath. It’s the place that helped turn an uncertain and unassuming girl into a soon-to-be NCAA Division I runner at the University of Utah.

“It’s just special,” Rose said. “It just helped me overall as a person. It helped me get out of my shell a little bit.”

That’s because sports just didn’t seem to be her thing.

She first tried volleyball, but gave it up immediately. Her parents encouraged her to take up tennis thinking she might follow in her grandmother’s footsteps. Marilyn York Rose was the 1951 state girls’ singles champion at Boise High School.

But no such luck.

Her grandparents then brought home a soccer ball all from Europe for her, thinking she might kick it around. But it quickly collected dust at the bottom of the toy bin.

Instead, Rose was more of a reader. By kindergarten, she was reading “Charlie and the Chocolate Factory” and “Matilda.”

It all prompted her father Jim Rose to say she would be “brainy but never “athletic.”

“I never told my husband this, but I took that as a challenge,” mother Shannon Rose said. “I was a little offended that he did not see her as being athletic.”

So in a last-ditch effort to prove him wrong, Shannon took their only child out into the backyard for a race.

And it seemed at that moment, Megan Rose had finally found her sport.

She started track in the fifth grade at Valley View Elementary School where the “track” consisted of just an open grass field. It didn’t matter. She still “flew past” everyone, including the boys, her mother said.

Rose eventually moved on to the real deal in middle school at Fairmont. It wasn’t much of a transition either. She was the 100-meter champion at the Boise Schools East Regionals in the seventh grade before winning the same event at the Boise Schools City meet a year later.

But Rose almost didn’t continue on into high school after Shannon explained that the races would no longer be separated by grade – and that she would be racing against older, more physically-mature runners.

“Everyone felt super old and intimidating like they knew what they were doing,” Rose said. “I just didn’t know anyone. It was just so unlike anything I’d ever done before.”

Fortunately, friend and former teammate Amber Morgan talked her into staying with it. Longtime Capital track coach Bryan Stith was glad she did.

“It took her all but two sprints to make me think, ‘Goodness gracious, this girl can really, really boogie,’” Stith said. “I’ve been doing this for a long, long time. When you see talent, you know it.”

It wasn’t long before everyone else did, too.

Rose won the first 100 race she ever competed in a dual meet against Nampa. She then had the first of many personal records a few weeks later at the Boise Relays, which prompted Stith to use a tried-and-true technique to motivate her.

“He said, ‘That’s good, but freshmen don’t typically make state,’” Rose said. “So I took that as a challenge.”

Not only did she make state in the 100, but medaled in the process with a fifth-place finish. It capped a year that saw her post three wins and four top-five finishes.

The following year, she dropped her time by more than three tenths of a second and nearly upset Eastern Oregon’s Jasmine Devers, who hadn’t lost in either the 100 or 200-meter that year, in the state finals.

“We called her the 95-meter state champion,” Stith said while laughing. “But in all seriousness, it was the moment where we were like, ‘OK, that’s the third-fastest time in Capital history. We got something special.’”

But Stith and everybody else had to wait another year to find out just how special. The coronavirus basically wiped out Rose’s entire junior year, except for the “Dual of the Ages” between Capital and Boise in early March. She won the 100 in 12.63 seconds, which ended up being the fastest time in the state.

Rose didn’t dwell on the abbreviated season, though. She spent the rest of the spring at her home track taking on grueling workouts by herself.

Last summer, she competed for the YMCA Team Idaho Club, and broke her own season-best time in the 100 with a 12.57 at the Team Idaho Summer Meet 2 in late July.

“It was rough because we all knew that she probably would have won state that year. She really wanted to run in college and your junior year is super important for colleges and that didn’t happen. I think that really hurt her,” Shannon said. “But she didn’t complain once. She just went out and continued to do the work. It still worked out in the end, it just took a little longer.”

Her time finally came as a senior.

It began even before the spring season when she broke the 60-meter state record with a time of 7.79 seconds in a preliminary heat at the Utah Spring Challenge #2 in Kearns, Utah.

And it carried over into the spring a couple months later – but not without a few challenges.

Rose has had exercise-induced asthma since freshman year. According to the Mayo Clinic, it is the “narrowing of the airways in the lungs triggered by strenuous exercise.” The symptoms include shortness of breath, wheezing, coughing and chest tightness, all of which Rose has experienced. The only real treatment for it is an inhaler, which Rose said doesn’t work.

Rose also dealt with hip problems – then pain in her right foot a week before the district meet.

“I don’t think I slept for three nights not knowing what was wrong with her foot,” Stith said. “Here you are the fastest girl in school history and you potentially have a stress fracture on the top of your foot.”

Thankfully, it ended up just being a case of tendonitis.

But through it all, Rose totaled 30 wins across four different events in the 100, which she went undefeated in, the 200, the 4×100-meter relay and the 4×200-meter relay. She also broke former University of Idaho runner Tristin Bowen’s school record of 12.18 seconds with a time of 12.16 in a dual meet against Mountain View in late April. And Rose ran under 12 seconds, not once, but twice, including at the state meet, which was the site of her crowning achievement.

Rose won her opening heat in a blistering time of 11.92 seconds in late May at Eagle High School. It was sixth-tenths of a second faster than the 11.98 time she put up at the Boise City Championships a few weeks prior. While the time went down as the fastest time in the state and the 142nd-best in the nation, it wasn’t a new state record because of an illegal tailwind.

But Rose had one more crack at it, and this time, it went in her favor.

In cold and wet conditions, she smashed Highland’s Julie Briggs’ long-standing record of 12.07 seconds that was set all the way back in 1989. Rose clocked a time of 12.02, also capturing her long-awaited state title in the process.

“I didn’t really realize at the time that it was that important,” Rose said. “But it’s definitely kind of emotional now.”

As a result of all of that, Rose was invited to compete at the prestigious Brooks PR in Renton, Washington on July 2. It’s why Rose returned to the track on that hot June afternoon.

“During training, a random guy was just jogging around the track and stops and points at her and goes, ‘Hey, are you Rose?’ She smiled at him and was like, ‘Yeah,’ And he goes, ‘Awesome, keep kicking (butt) kid,’” Stith said. “She turned to me and was like, ‘Whoa, that was nice, and I was like, ‘Well, you’re kind of popular now.’”

Rose took sixth at the Brooks PR against the best sprinters in the country on just 16 days of training.

“I just think with Megan, you knew she earned it,” Stith said. “It wasn’t just some talented kid who was kind of lucky. We’ve just had kids before who were just super, super talented, and they did something like that. There was some ego or bravado that just wasn’t needed. But with Megan it was so genuine and authentic. I think there’s more respect for someone when you know they did it the right way.”

And Rose did it right there on that very track. One in which she gave one final look at before driving away and saying goodbye … for now.