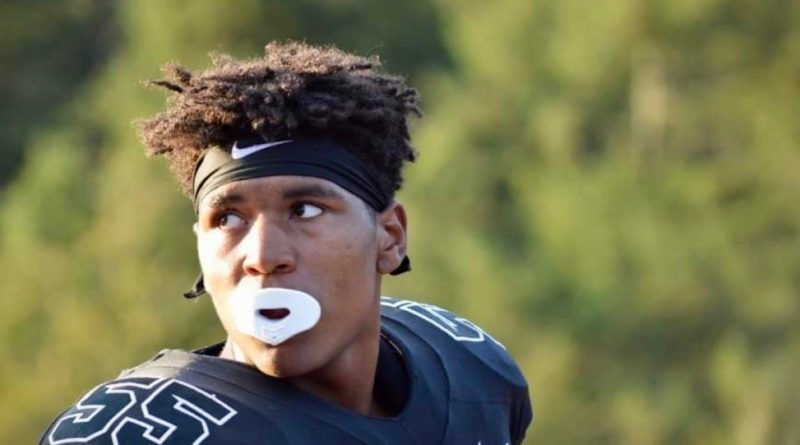 When Tenino teenager Takari Hickle looks at all the great influences in his life that led him to a life-altering decision Monday – a verbal pledge to Oregon State University football – he is thankful.

He has a supportive family who lives out of state; a head football coach in Cary Nagel who has taken him under his wing; and a bunch of close-knit, small-town teammates who support him on the big victories in life.

“He plays football like he does barrel racing,” Nagel said. “He finesses those horses around.”

It became Hickle’s first love at an early age – even after a hair-raising debut.

As a small child, Hickle wandered out to the pasture where his sister’s gelding was, and somehow climbed up on the horse.

“It starts a full sprint around the pasture,” Hickle said. “And the entire time, I am laughing and holding onto the mane. My mom looked out the window and her heart dropped. She ran outside, and yelled, ‘Stop, stop, stop!’ And the horse stopped, and she got me off the horse.”

That experience led to many dads on the saddle in barrel racing – at stops all over the Northwest.

“It is weird how (barrel racing) has correlated to other sports,” Hickle said. “I see angles more. I see holes better, and how to move the body.”

Hickle is a physical specimen – a big athlete who can run. He has a massive wingspan with big hands (more than 11 inches in size).

“Shaking hands with him,” Nagel said, “is like shaking with a catcher’s mitt.”

He plays all over the field at Tenino, from fullback and tight end on offense to defensive end and linebacker on defense. He was an all-1A Evergreen Conference first-team selection both ways this spring.

And after an offer from Nevada came in, recruiting attention started to pick up for Hickle. He visited Oregon State during the final week of June – and Nagel could tell early on that his standout became enamored with college-town Corvallis.

“It was pretty cool,” said Hickle, who plans on studying veterinary medicine at the university. “It was kind of everything I thought it would be.”