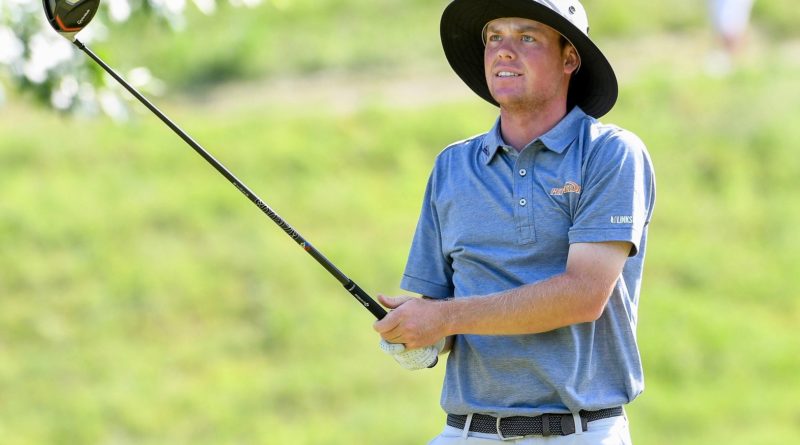 If you don’t hear Joe Highsmith getting carried away with all that he has accomplished in the past two weeks – an NCAA Division I men’s golf championship at Pepperdine University and his first U.S. Open berth – it is strictly by design.

He doesn’t want his attention to sway at all from golf.

“What I’ve learned over the last 10 days, and even previous two months, is any time I get caught up in a storyline and how cool it is, that’s not the best place mentally for me to be,” Highsmith said. “It is all about getting better, and hitting the shot that needs to be hit.”

Whatever Highsmith is doing, he should just keep doing it.

The face of the NCAA tournament (his final-hole bunker shot in the semifinals of match play was aired over and over again) now turns his attention to testy Torrey Pines South Course for this week’s U.S. Open. He will debut Thursday afternoon (12:41 PT) off the 10th tee with Tom Hoge and Bo Hoag.

“If I keep playing well, I know there will be opportunities for me on a bigger stage,” Highsmith said.

This first-time destination should come as no surprise for the sweet-swinging left-hander: He won a Class 4A title in high school at Bellarmine Prep, captured the AGJA Ryan Moore Open in his hometown Lakewood as a teenager – and left the high-school ranks in 2018 as a consensus top-10 national recruit.

The West Coast Conference freshman of the year in 2019 made a few tweaks to his swing with coach Brian Mogg starting last summer, and shifted his focus to the mental side of golf by working with a few sports psychologists, including Dr. Bob Rotella.

“When I am struggling, it’s because I am not committed to many shots all. And I know that is what most amateurs struggle with,” Highsmith said. “It is so much more of a mental battle than anything.”

“Definitely there was more self-belief after that,” Highsmith said.

And yet, Highsmith wasn’t in top playing form heading into the postseason, including the NCAA Tournament. That led to a heart-to-heart discussion with Waves coach Michael Beard the night before the match-play portion began.

“We put together a plan to get back on track with mental stuff,” Highsmith said. “I got a clear system, and it started to pay off.”

Highsmith won all three of his matches in the NCAA quarterfinals, semifinals and finals – including the clutch fairway bunker shot to a water-surrounded green at the finishing hole to secure a 1-up triumph over Oklahoma State’ Aman Gupta.

“I had my moments,” Highsmith said. “Everyone was playing great.”

After the NCAAs, Highsmith took a flight back to Washington, then drove over to the Tri-Cities for a U.S. Open sectional qualifying round at Meadow Springs Country Club in Richland.

He ended up being the 36-hole qualifying medalist at 6-under-par 138 to earn his first trip to the U.S. Open.

“For the most part, I was still running on adrenaline,” Highsmith said.

After that long Monday of qualifying, a congratulatory tweet came from none other than Fred Couples, a Washington state native.

It read: “Look who will be playing in The U.S. Open. My favorite college player, Joe Highsmith. Go Jo Go!”

“The first time I met him was the Junior Presidents Cup in 2017,” Highsmith said. “We did not talk much … but we have a lot of mutual friends in La Quinta.”

The two began playing at Madison Club. In fact, last fall, Highsmith estimated the two of them logged 10 rounds of golf together.”

“It’s been super fun to get to know him,” Highsmith said. “And it’s been cool of him to show that level of support.”

This week, Highsmith will have Pepperdine teammate Joey Vrzich on his bag. Vrzich won the California Amateur on this same layout last summer.