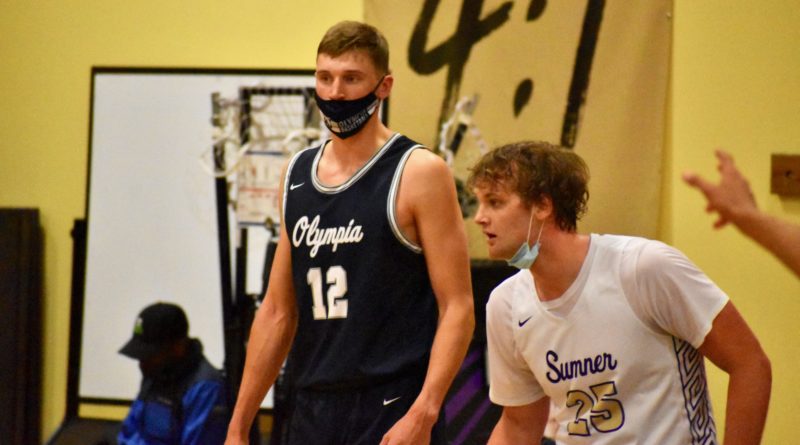 Parker Gerrits scored a game-high 15 points, and University of Washington signee Jackson Grant added eight of his 13 points during the Bears’ knockout run in the final four minutes as Olympia edged Sumner, 58-52, in the semifinals of the 4A SPSL boys tournament Wednesday night.

The Bears will play Curtis for the league title Thursday at 6 p.m. at Puyallup High School, followed by the Bellarmine Prep-Sumner matchup for the girls’ crown.

The Spartans rallied from a seven-point fourth-quarter deficit to grab a 47-45 lead with 3 1/2 minutes to go on Kaden Lewis’ jumper. He led Sumner with 13 points – 12 coming in the final quarter – off the bench.

“They’ve played a lot of games together in their careers,” Kiley said. “And it showed at the end of this one.”

Here are three takeaways from the Olympia-Sumner game:

JACKSON GRANT SHOWED UP IN THE NICK OF TIME

Some of that was Sumner’s effective 2-1-2 zone, which also stifled the Bears’ big man in two regular-season matchups last year (both Olympia losses).

The rest of it was, well – a bit head-scratching, to say the least.

“It was a slow first three quarters,” Grant said. “They were really using heavy defense on me, so we were trying to let other people make some plays.”

Grant picked up his fourth personal foul with 6:56 to go. And the Bears’ lead was gone three minutes later.

“It’s hard against this defense,” Kiley said. “Finally, we did get him on some things.”

The Bears went to a 5-out offense, giving Grant more space to cut into the middle. He scored three consecutive buckets for Olympia, all near the basket.

“Our goal was to be a magnet against him in the zone, and make someone else make a play,” Sumner boys coach Jake Jackson said. “He had to earn every bucket he scored.”

THE BEARS’ UNSUNG HERO WAS A FOOTBALL MVP

There were times last season when opposing teams would overload their defensive attention Grant’s way – and not even worry about Alfredo Ramirez-Cortes as a scoring threat.

That is not the case anymore.

Ramirez-Cortes was fantastic on both ends down the stretch. He knocked down a 3-pointer late in the third quarter. And his midcourt steal and three-point scoring play with 1:03 remaining sealed the deal for the Bears.

He finished with a quiet 11 points, but his contributions did not go overlooked by Kiley.

“He was the MVP of our football league, so he just loves big moments – and tonight was a great example of that,” Kiley said. When the moment gets bigger, Alfredo gets bigger.

“He is a glue guy – he makes shots, he defends, he gets on the floor, he takes charges and he makes the hockey passes.”

SUMNER WAS IN PRIME POSITION TO ADVANCE ON

Given the way the Spartans defended – they largely held Grant in check, and forced 17 turnovers (12 after halftime) – the end result was a bitter pill for Jackson to swallow.

“The little details,” Jackson said. “We’ve been preaching it all year – the little things are everything. We just had some costly errors that were magnified tonight.”

A bright spot was Lewis’ emergence. The 6-foot-5 junior, who started his prep career at Auburn High School, went toe-to-toe with Grant in the fourth quarter, hitting difficult fadeaway shots, in and out of the key, as Sumner’s really only source of offense.

“He has a great feel for the game, and can handle it for a big man,” Jackson said. “He was solid.”