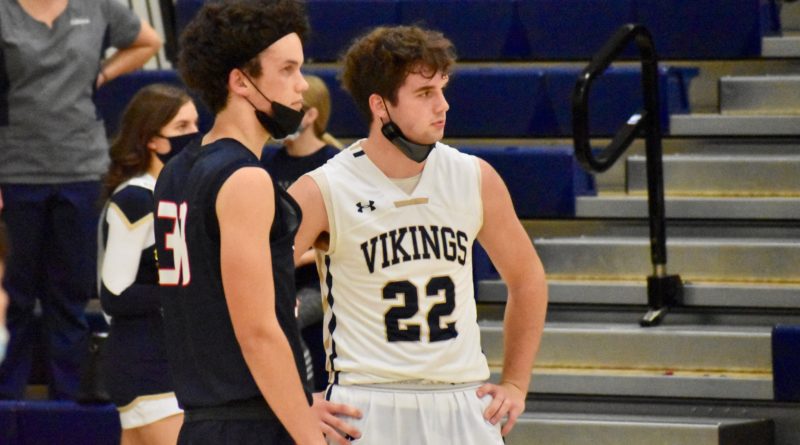 SELAH – Noah Pepper came to Selah High School knowing he’d be a second-fiddle scorer as a ninth grader to older brother, Elijah – who left as the program’s all-time points getter.

So, Pepper readjusted his goal-setting: He wanted to lead the squad in rebounding.

And he’s done that as well as anybody who has come through Selah’s ranks.

The Central Washington University-bound Pepper totaled a game-high 25 points and 10 rebounds, leading the Vikings to a 61-52 home 2A CWAC victory Tuesday night over Ellensburg.

“I told them in our post-game (meeting), when you can sweep a team in your league three times, that is saying something,” Selah boys coach Tim Garza said.

“I pride myself in my rebounding,” Pepper sad. “It is more of a hard-working trait than anything else.”

Pepper said during his first season, he just wanted to grab more rebounds than teammate Zak Donato – the team’s top returner in that category.

He did just that, and continued to pile up numbers.

But Pepper said he had no idea he was approaching 1,000 – until somebody notified him before the season he had a chance to get there.

“You don’t hear about it often, so I figured it was hard to reach,” Pepper said.

Pepper got off to a scorching start in the first six minutes – 12 points, four rebounds, two steals – as the Vikings bolted out to a 16-5 lead. In fact, Pepper and Durand combined to score the team’s first 23 points.

But Selah’s hot scoring spurts were often followed with stretches of sloppy turnovers – enough to keep the Bulldogs hanging around much of the game.

Nine seconds into the fourth quarter, Pepper hauled down his eighth rebound of the game – and 1,000th of his career – on a putback basket to give the Vikings a 49-35 lead. The game was stopped so the senior could be recognized for his accomplishment.

“He enjoys doing the dirty work,” Garza said. “He believes he is the toughest son-of-a-gun in that gym.”