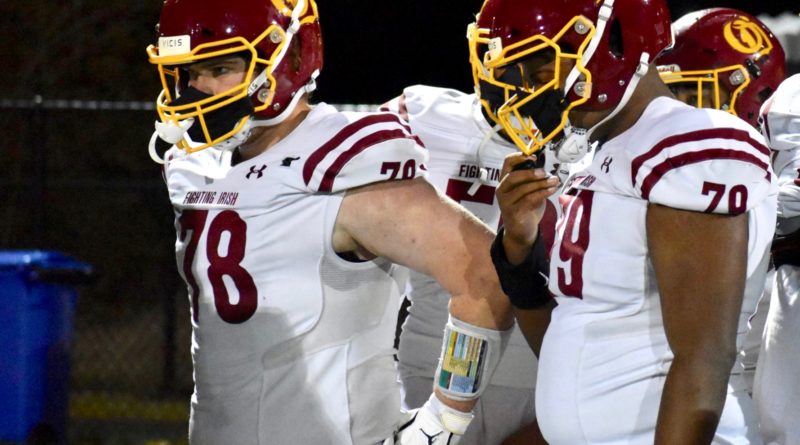 SEATTLE – Longtime coach Monte Kohler quickly pointed out to his O’Dea football players the past two weeks – often in life, there are no do-overs.

But for the Irish, that is what the Metro League playoffs became.

After suffering losses to both reigning Class 3A champion Eastside Catholic and upstart Seattle Prep during the regular season, the Irish wrote a different ending in each of the rematch games.

And after defeating Eastside Catholic last week in the league semifinals, O’Dea walloped the Panthers, 49-7, in the Metro championship game Friday night at downtown Memorial Stadium.

The Irish rolled up 511 yards of offense, all on the ground – led by ninth-grade running back Jason Brown, who rushed for a career- high 247 yards and three touchdowns on 23 carries.

“We said to them – in life, you usually don’t get rewrites and redos, but that you have an opportunity here,” Kohler said. “So let’s make the most of it.”

Here are five observations from the O’Dea-Seattle Prep game:

FIRST, A SLOW START – THEN A QUCK FINISH

The Irish were hailed by many in the preseason as the top team in Washington, regardless of classification.

But after starting 1-2, including a 20-0 shutout loss to the Crusaders on opening weekend in Sammamish, many began to wonder if O’Dea’s profile was a tad overblown.

“We knew we were a good football team all year,” Kohler said. “Early on, we just never got out of our own way, or we were practicing like we were in COVID (times).

“But they are playing really well right now.”

On Friday, the Irish got down 7-0 early, but scored on its first four first-half drives – the came out on a bulldozing march to start the second half, going 75 yards on 11 plays that nearly ate up six minutes off the clock to grab a 35-7 lead on Brown’s 11-yard scoring gallop – his final touchdown of the game.

“This is Game 7 of our season,” Kohler said. “This is when we normally try to make a move and get ready.”

JASON BROWN COULD BE THE BEST IN-STATE NINTH GRADE TAILBACK SINCE … JONATHAN STEWART?

After Seattle Prep opened the game with a long drive – 15 plays, 67 yards – to score its only touchdown (Jake Sype’s 5-yard pass to Braeden Smith), the blue-colored brigade was screaming loud and pumped up.

It took four plays for O’Dea to land its first body blow = and tie the game.

Once again, Brown was the focal point of the game plan – and his 49-yard touchdown run up the left sideline hit a gear nobody on the Seattle Prep defense could match, even with an angle.

A sprinter in track and field, Brown not only has the top-end burst, but he has enough wiggle and strength – even at 15 years old – to shake off tackles and keep moving forward.

Brown added scorings runs of 4 and 11 yards, and ripped off a 51-yard scamper to set up Tajj Dyles’ 4-yard score at the end of the first half.

“Man, he is going to be a beast,” O’Dea senior captain Milton Hopkins Jr. said. “For him to do this, and have three more years – his potential is limitless.”

Brown did not receive a carry in the season-opening loss at Eastside Catholic, but came close to a 1,000-yard rushing season over the final six games, Kohler said.

“It meant the world for coaches to trust me enough to give me the ball in big games – and in big situations,” Brown said. “It is an honor.”

On one hand, with all the returning college-level senior talent the Panthers had – they were generally regarded as a top-10 team heading into the spring season.

On the other hand, nobody thought Seattle Prep would upend O’Dea (15-14) and Eastside Catholic (20-7) in back-to-back weekends for the first time in school history to seize the Metro’s top seed to the playoffs.

“Our kids this whole year have bee so resilient, and they’ve persevered through so much and most importantly just kind of stuck together and believed in each other,” Panthers coach Aaron Maul said.

But on Friday, they ran into a buzzsaw.

An early turning point came in a 7-7 game – with Seattle Prep taking over on its second possession.

On fourth and 2 from its own 32-yard line, the offense stayed on the field – and surprisingly ran a play, which was a Sypes’ incompletion.

“We wanted to quick-kick (with a punt), and it did not get communicated right,” Maul said. “That is our fault as a coaching staff.”

O’Dea took over with the short field, and needed five plays to punch in the go-ahead touchdown – Brown’s 4-yard run with 50 seconds remaining in the first quarter.

From that point on, the Panthers’ offense sputtered, finishing the first half with just 107 yards – and this was after going 67 on the opening series.

“We knew this was going to be a big-time football game,” Maul said. “Hats off to O’Dea.”

MILTON HOPKINS JR. SHOULD BE AT THE TOP OF YOUR ROOTING LIST

As a first-year starting quarterback in 2019, Hopkins led the Irish to a 12-1 record (at Metro title) and a state runner-up finish.

And this spring, when he returned after missing the first few games because of academic issues – the Irish went 4-0 when he was lining up all over the place on both sides of the ball.

After the Irish’s convincing victory Friday night, Hopkins sat stationary on the turf near the west end zone in sort of a pensive state.

“It is crazy, you know,” Hopkins said. “I’ve been here for four years, and invested a lot of time, sweat and tears into becoming the player I am now. And these past two years … they put a lot of trust in me.”

Hopkins mainly played defensive end on Friday, but took snaps at quarterback and had runs of 23, 13 and 8 before throwing an interception in the second half.

His next stop: The University of Washington football team as a walk-on.

Senior K’son Mika has played the season with a cast on his left arm after suffering a broken wrist in Week 1. He’s still maintained the ability to do all the duties of an outside linebacker — including intercepting the ball.

Mika jumped a route and intercepted a screen pass with one hand and ran it back for touchdown, fighting through cramps to cross the goal line before defenders could pull him down. O’Dea already had firm control of the game, but for Mika, it was a cherry-topping moment for his high school career.

“All game they were going to the outside,” he said. “I was waiting for the right time and it just fell into place.”