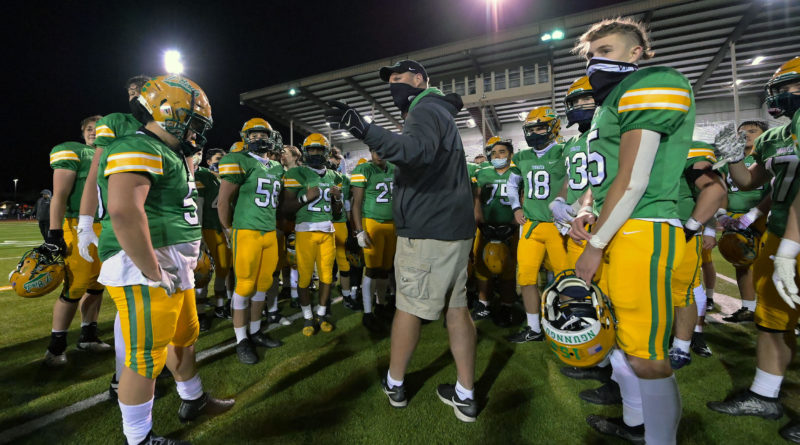 The chatter had been out there for months. Even after Tumwater defeated Steilacoom for the Class 2A championship late in 2019, the Sentinels had made it known they wanted another shot – another opportunity to slay the green giant.

Well, they got it Saturday night.

And the jolly-green brigade was more than ready.

Senior Turner Allen rushed for 201 yards and three touchdowns, and the No. 1 Thunderbirds opened the second half by scoring three touchdowns in a 10-minute span to pull away for a 50-12 victory over No. 2 Steilacoom at Tumwater Stadium.

The Thunderbirds concluded the shortened spring season on a 20-game winning streak.

“We knew all year long they wanted to play us,” Tumwater coach Bill Beattie said. “My hats off, they are a great football team. But those players (of ours) just got so excited, and they worked their tails off. They knew this was it for them, and it was their last week.

“They put on a show tonight.”

Here are five observations from the Tumwater-Steilacoom game:

IN THE END, TUMWATER’S BIGGEST STRENGTH WAS ITS DECISIVE ADVANTAGE

When folks look back at this dominant stretch of Thunderbirds’ football, the first thing they should remember is the unique collection of talent along the defensive line.

Like it has been for the past few seasons, it was the difference again Saturday.

Anchored by University of Minnesota signee Jacob Schuster, Tumwater registered six sacks and got after Steilacoom quarterback Chance McDonald all night in putting the Sentinels’ offense in a proverbial headlock.

“What we learned from last time (48-34 win in 2A title game) is we mixed stuff up this time,” Beattie said. “We did some things a little bit different than what we did in the championship game … and I think it confused them a little bit.”

Schuster started the game by playing back, almost at linebacker level, and came in on a delayed blitz to sack McDonald for a 10-yard loss. It was certainly a tone setter.

“They smacked us in the mouth in the scrimmage (a few weeks ago),” Schuster said. “We had to come back firing … and win the fight.”

THE ‘FIGHT’ WAS ESSENTIALLY WON IN THE THIRD QUARTER

After holding Tumwater out of the end zone in the final minutes of the first half, Steilacoom felt pretty good trailing, 14-6.

The Sentinels got the ball to start the second half – and did nothing with it.

Tumwater did. Sparked by Allen’s 50-yard run, the Thunderbirds extended to a 21-6 lead on quarterback Cody Whalen’s 1-yard sneak at the 10:15 mark.

What happened over the next 25 seconds doomed Steilacoom’s day.

On first down, McDonald fired off a pass in the middle of the field that Tumwater defensive tackle John Judy deflected – and teammate Cooper Wall hauled in.

“He put his big old hands up and knocked that thing in the air, and I got lucky and caught it,” Wall said.

Wall rumbled 10 yards for an interception-return touchdown, and the Thunderbirds’ lead grew to 29-6.

Allen has a big heart – and flashes an even-bigger smile as the new featured running back in Tumwater’s Wing-T offense.

Last season, he backed up record-setter Dylan Paine, and made a bigger mark as an all-state defensive back.

But he showed he was more than ready to take on a bigger offensive role as a senior, breaking off big runs of 54 and 50 yards that kept the Sentinels on their heels.

“Everyone likes carries,” said Allen, who got plenty of them in his final start – 24.

And he did all of that with a bum shoulder – something he injured in the offseason during a snowboarding trip, and re-aggravated early last week in a game against W.F. West.

“What guts,” Beattie said. “His shoulder is killing him.”

THE SENTINELS WERE UNDERDOGS, DOWN THREE STARTERS – BUT STILL SHOWED UP

In the war of mind games, the Sentinels were already winners before they showed up Saturday – they had the champions’ undivided attention.

It is because Steilacoom has scary talent, and will be recalled during this dominant Tumwater run as a program that could have easily won a couple 2A titles at another time.

“They are better than us,” Davies said. “They are a great team. We did not play our best today. “

Even though Tumwater broke off a few long runs, the Sentinels’ defensive was stout, for the most part, against the Wing-T grinder – much more than it was 15 months ago.

It is weird to say, but it was the offense that had few answers. The run game was non-existent – and McDonald, a Western Kentucky signee, completed 11 of 26 passes for 250 yards with two touchdowns and two interceptions.

“They did a good job They schemed it up well,” Davies said. “It was hard for us to pick up their blitzes.

“We just got so many more different looks this year – more different blitzes. When we played them in the state title game last year, they showed us the same look all game. At that point, it is easy to call plays, and easy for Chance to identify what is going on.

“Today, the way they mixed up their front and their blitzes, it was tough for our offensive line – and Chance was out there trying to run for his life.”

SIT BACK AND ENJOY AS TUMWATER TRIES TO MAKE HISTORY

Everybody involved in the game Saturday – coaches, players and athletic administrators – agreed this was the unofficial/mythical 2A state championship for a crazy season with no state playoffs.

Now, the thought it out there – could the Thunderbirds be in the midst of an all-time great 2A run?

What they are shooting for is what Lynden accomplished more than a decade ago, winning five 2A titles in a six-year span – and going 65-4 during that span.

With juniors Ryan Otton and Austin Terry returning in the fall to anchor the defensive line, and a new wave of skill-position talent, including a quarterback battle between sophomores Luke Reid and Alex Overbay, the Thunderbirds should still be the consensus No. 1 preseason team next season.