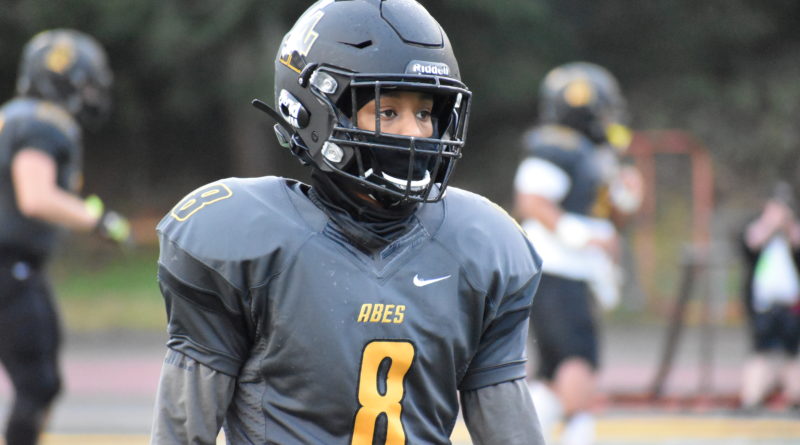 The intermediate future of 3A Pierce County League football is bright – and Lincoln High School’s sensational sophomore quarterback Gabarri Johnson is a big reason why.

Johnson guided the 10th-ranked Abes the length of the field – 96 yards – in the final four minutes for a game-winning touchdown and two-point conversion with 3.8 seconds to go, lifting them past No. 5 Lakes, 22-21, on Friday night at Lincoln Bowl.

Now, the Abes’ rooting interest turns to the team they just beat – the Lancers. If Lakes can beat visiting Spanaway Lake on Wednesday night, all three teams would be 3A PCL co-champions.

If that happens, Lincoln would hold at least a share of the league title in six of the past seven seasons.

“We talked about that this week, and that we still had a lot to play for,” Lincoln coach Masaki Matsumoto said. “And the kids stepped up and made plays.”

Here are five observations from the Lincoln-Lakes game:

After Lakes grabbed a 21-14 lead with 4:10 remaining, the Abes bobbled the kickoff and downed it at their own 4-yard line.

With the game on the line, an important message was conveyed on the Lincoln sideline.

“We’ve got to go fast, and everybody plays smart,” Johnson said. “That is exactly what we did.”

Johnson gives this offense a different element than previous three-year starter Caden Filer – a big-play scrambler. And he started off the series looking to run, and got the Abes near midfield.

“He is truly a dual threat,” Matsumoto said.

On fourth and 8 with 1:11 to go, Johnson showed off that arm, too – rifling an 18-yard strike to Joziah Nixon to keep the drive alive.

And in the closing seconds, Johnson got outside the pocket and lofted a pass in the back right corner of the end zone that Darius Bailey came down with over two Lakes defenders for a 14-yard score with 3.8 seconds remaining.

Johnson finished it off with a quarterback sneak for the two-point conversion – and come-from-behind win. He finished completing 20 of 28 passes for 251 yards, and added 53 rushing yards.

“I promised my coach I’d punch it in,” Johnson said.

LAKES THOUGHT ITS FOURTH-QUARTER GAMBLE WOULD BE FINAL PAYOFF

The Lancers rolled the dice, too – and easily could have won this game.

Trailing 14-13 with 81/2 minutes to go, Lakes sent on the punt team after quarterback Justin Brennan was sacked, setting up fourth and 13.

But after Lincoln committed an offside penalty, bringing the ball to the Abes’ 38, longtime coach Dave Miller sent his offense back on the field.

And Brennan cashed in, connecting with senior Jaedon Hall for an 18-yard gain on a passing play.

Abel Patu capped the six-minute drive with his 1-yard touchdown. Leo Pulalasi added the two-point conversion run – and the Lancers had a 21-14 lead late in the game.

“This is one I thought we should have had, and we let it slip away,” Miller said.

WHEN IT WAS TIME FOR DARIUS BAILEY AND JOZIAH NIXON, THEY WERE READY

Last season as juniors, Bailey and Nixon were part-timers sitting behind a talented cast of wide receivers.

“Last year with the Clarks (Jaylen and Donovan Clark) around, it was hard to beat them out,” Johnson said.

Well, a year later – and Bailey and Nixon were the clutch performers on their own senior night.

Bailey caught six passes for a game-high 109 yards, including the game-tying touchdown in the final seconds. He also had an interception to close out the first half.

“We thought he could have a great year,” Matsumoto said.

On that final touchdown, Johnson said Bailey was a secondary read. When he got flushed out, all that changed.

“The pocket collapsed, I got out and found my guys – and he came up big-time for us,” Johnson said.

There is no denying Johnson looks for Nixon a lot – even with big-time recruits Chance Bogan and jayden Wayne also part of the receiving corps. The senior is shifty and a good route-runner.

“We’ve been grinding,” said Nixon, who finished with five receptions for 49 yards and a 16-yard touchdown late in the first half. “We knew what we had to do, and we came out and did it.”

IT HAS BEEN AN WAR OF ATTRITION, ADJUSTMENT FOR BOTH YOUNG CLUBS

Before the season started, many circled the date Friday as the likely premier showdown in the 3A PCL.

It still might end up being that way, but few expected these two perennial top-10 teams to come into the matchup with a combined three losses.

But there is a viable reason: Both Lincoln and Lakes are starting a ton of sophomores.

Absorbing the loss of so many impact seniors and assistant coaches, the Abes could have used an extended preseason to work out the kinks for not only this new wave of talented players, but to get five new coaches better integrated into the program.

And an underrated factor in Lincoln’s slow start was the loss of all-state athlete Julien Simon, who graduated early to enroll at USC.

Lakes was badly bit by the injury bug, Linebacker Devon Nofoa-Masoe (knee) and a group of linemen, including nose guard Howard Golden, suffered season-ending injuries, leaving the team to start as many as 10 sophomores on both sides of the ball.

AND YET, HEADING INTO NEXT FALL, THESE ARE GOING TO BE TWO FUN GROUPS TO MONITOR

This is one of the spicier rivalries in the Seattle-Tacoma area – and that won’t be changing anytime soon with the boatload of young talent the Abes and Lancers will showcase over the next few years.

Lincoln has the new faces of its team – Johnson, Wayne and Bogan – all back in the fall, and should also return opt-out running backs Majesty Irving and Taevin Bond as well.

The Lancers will need to bring a new quarterback in the fold, but their top wide receiver is sophomore Justin Smith. And their secondary, led by FBS recruit Michael Westbrook Jr. at safety, is full of hard-hitting enforcer types.

“They bring it,” Miller said.

Which just adds more fuel – or flavor – to the tasty annual showdown.

“It is already fun,” Matsumoto said. “We always look forward to this matchup.”