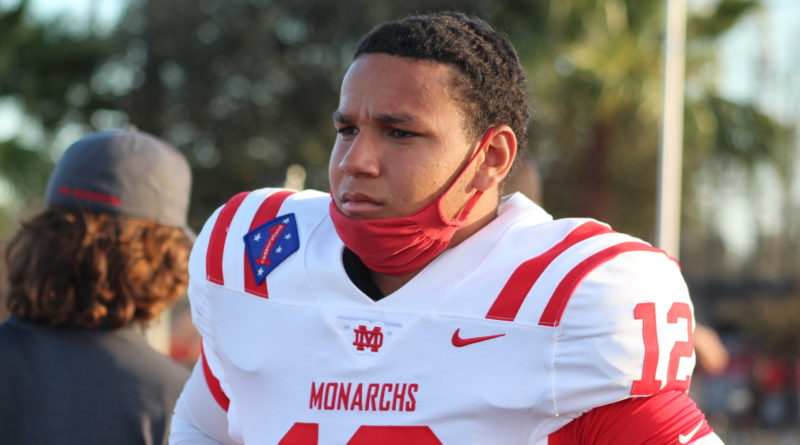 SAN JUAN CAPISTRANO — No one would play Mater Dei last week — the Monarchs couldn’t even get a scrimmage. In Friday’s 52-3 win over JSerra, Mater Dei showed why no team in Orange County or any of OC’s neighboring counties felt comfortable playing them. Once again, Bruce Rollinson’s team is loaded and they’re ready to defend last year’s Trinity League title. Here are three takeaways from Friday’s game.

Freshman quarterback Elijah Brown made his first ever varsity start on Friday and looked very good throwing three TD passes and not turning the ball over. He beat out junior Emmett Brown, who checked out of Mater Dei on Friday, and sophomore Parker Awad to win the job.

“I thought Elijah was solid,” Mater Dei head coach Bruce Rollinson said. “It’s a young kid, but I was pleased how he handled things. He even had a couple of audibles to change the protection a couple of times…His mechanics fell a part a little bit on a few balls, but that’s a young kid, overall I’m pleased.”

Brown credited his seniors with preparing him for varsity action.

“They really helped out a lot,” he said. “They gave me little pointers about what Bryce would do last year and that helps out a lot.”

Brown played well on Friday, but future games against Servite and Santa Margarita will paint a clearer picture of exactly how far a long he is ahead of Mater Dei’s season finale against St. John Bosco. Brown aced the first of five tests he’ll have in this shortened spring season.

“You can’t say enough about our defense,” Rollinson said. “We knew that’s where the experience was.”

Mater Dei has the best secondary in California and that unit looked tremendous as well on Friday intercepting multiple Potter throws. If the Monarchs go on to win the Trinity League this spring, it will be their defense that leads the way.

On the offensive side, Raleek Brown (2022 Oklahoma commit) had a four yard touchdown run and looked very elusive. Monarch freshman Ajon Bryant had a strong debut as well, scoring a TD of his own.

“I’ve been challenging our offensive line for the last two weeks,” Rollinson said. “We had a game simulation a couple of weeks ago and I didn’t think we were very solid up front and I thought tonight we run blocked well and stuck to our assignments, which pleased me.”

The Mater Dei offensive line is the team’s x-factor. If they can protect Brown and run block as well as they did on Friday all season, the Monarchs have a great chance at running the table. That’s their position group to watch as the year goes on.

JSerra left tackle Mason Murphy, a USC signee, is the only big name returner for the Lions this spring. Between opt outs, transfers and graduation, JSerra looks very different this season. Junior Zach Pua started at running back and Potter at QB for the Lions. Those two along with Murphy will be the three the most important pieces for JSerra’s offense in 2021.

Beginning the season with Mater Dei was a tough break for such an inexperienced team. Playing at Santa Margarita next week will be a challenge as well, but expect a closer game.