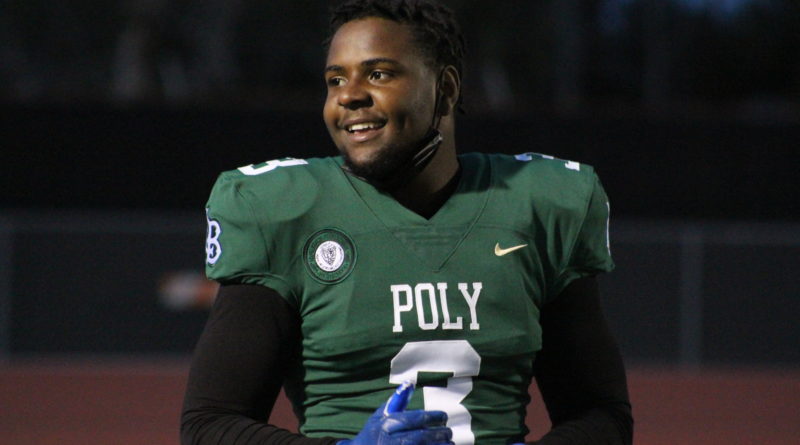 Samples, Long Beach Poly’s sophomore tailback, scored on a five-yard run in overtime to give the Jackrabbits a 27-21 win over the Serra Cavaliers in each teams’ 2021 season-opening game on Friday. Samples finished the night with 28 carries for 162 yards and two touchdowns.

Both teams had chances to win the game in the fourth quarter, but a Poly drive stalled at the end of regulation. In the extra session, Serra went backwards in their first and only overtime possession and then Samples scored for the Jackrabbits to win the game.

MORE THAN A WIN FOR POLY

It had been more than 16 months since Long Beach Poly’s varsity football team had played in a game and over the course of those 16 months, the Jackrabbits had to deal with the devastating affects of the COVID-19 pandemic firsthand.

“We’ve had to fight through more adversity than most groups,” Long Beach Poly head coach Stephen Barbee told SBLive following the Jackrabbits victory. “We’ve had parents pass away, grandparents pass away and these kids still showed up everyday.”

“We’ve had 6 a.m. workouts three times a week. We’ve had lifting sessions. This is an incredible win. We didn’t fold under pressure and we made a statement.”

POLY WILL WIN GAMES WITH RUNNING GAME AND DEFENSE

The Jackrabbits moved the ball thanks to solid offensive line play leading to positive gains from Samples and senior Jaden Bridges.

“Our O-line was moving bodies all over the place,” Barbee said.

All four Long Beach Poly touchdowns came on the ground, including a clutch five-yard scamper from junior quarterback Shea Kuykendall, which tied the game at 21-21 in the fourth quarter.

Defensively, the Jackrabbits picked off 2022 Texas Longhorns quarterback commit Maalik Murphy twice and on Serra’s one offensive possession in overtime, Poly didn’t give Serra an inch. Murphy did throw two impressive touchdowns, but overall the Jackrabbits defense was solid and did enough to win.

The key play in the game for the Poly defense came on a third quarter 4th-and-goal from the one-yard line for Serra that the Jackrabbits stuffed. Senior Justin Blount made the stop on Serra running back Elijah Davis. If the Cavaliers had gotten six on that possession, they most likely would have won the game.

The biggest storyline heading into the Serra vs. Poly game was that it was 2022 Texas quarterback commit Maalik Murphy’s starting debut for Serra. He got off to a slow start, but showed significant improvement in the second half.

Murphy’s best throw of the night was a 26-yard third quarter touchdown dart to Donovan Roebuck, which put Serra ahead 21-14.

Serra’s offense took at least five delay of game penalties and was inconsistent running the ball which was most likely a product of only having 14 days of padded practice ahead of Friday’s opener. Expect the Cavalier offense to improve week to week in Mission League play as a young group gains more experience.

Junior receiver Darrian Anderson was Murphy’s main target in the game. He looks primed for a big season.