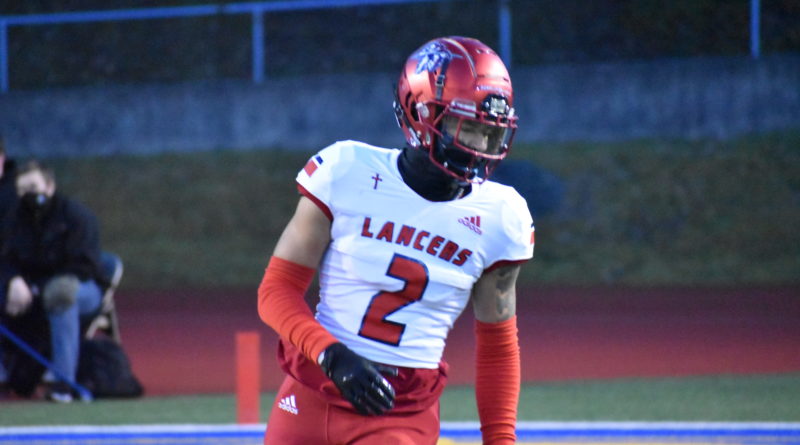 COVINGTON – Given the long 16-month delay on a restart, third-ranked Kennedy Catholic looked relatively sharp in its return for 4A NPSL play Friday night.

Led by Washington Huskies signee Sam Huard, the Lancers’ air-to-end-zone firepower was on full display in a 49-14 victory over host Tahoma at Bill Maxwell Stadium.

Huard threw for 495 yards and seven touchdowns as the Lancers scored on their first seven offensive drives. It was Kennedy Catholic’s fifth consecutive victory over the Bears, dating back to 2016.

“This was a fun day,” Lancers coach Sheldon Cross said.

Here are five observations from the Kennedy Catholic-Tahoma game:

But the left-hander also knows what Shadle Park standout Brett Rypien’s top passing mark all-time is – 13,044 yards, set in 2014 – and where he was entering Friday night at 11,741 yards.

Huard took a big step in the record-setting direction with his 495 yards, completing 26 of 35 passes against the Bears, and pushing his career total to 12,236. He is now 809 yards away from becoming the new leader.

And he knows there is a good chance he will get there.

Cross knows record-setting performers comes across only so often, so he will give Huard every opportunity to become the state’s passing king.

But also will keep other factors in mind in how long he will keep Huard in blowout games.

And on the first play of the fourth quarter, Huard threw his seventh touchdown pass to junior Lamont Richardson – a 20-yarder in the right flat.

Cross gave Huard one more series. Oddly enough, it was the only time the Lancers stalled after getting inside the Tahoma 10-yard line, but to only be turned away on a fourth-down drop in the end zone.

“It was good to get all of our young guys in,” Cross said. “Sam played a good game. He had a full night.”

FIRST KENNEDY CATHOLIC PLAY WAS RIGHT IN THE STRIKE ZONE

With this nucleus of four-year starting playmakers on offense, Cross decided to have a little fun in kicking off the new season Friday night.

He ran a trick play – one the team dubbed, “Baseball.”

Huard handed the ball off to Shumpert coming across the formation, who flipped it to Tinae near the Kennedy Catholic sideline.

Tinae threw back across the field to Huard, who laid out a perfect floater to the streaking Shumpert for a 46-yard gain – down to the Bears’ 23.

“There was a lot of adrenaline going – a lot of nervous energy – and to have a play like that to get rolling, it was good for us,” Huard said.

A few plays later, Huard tossed his first score of 2020-21 on a 6-yard strike to Shumpert.

“We are an aggressive program,” Cross said. “If you are going to hold us up for 400 days, then we were going to come up guns blazing.”

THESE WERE NO BAD-PLAY BEARS, WHO HAD THEIR ROARING MOMENTS

Longtime Tahoma coach Tony Davis knew a lot had to break in his team’s favor to keep up with the Lancers on Friday night.

But after Huard and company immediately scored, the signal caller on the other side – senior Michael Palandri – immediately led his offense to a touchdown to open the season.

A physical runner, Palandri converted a fourth and 1 on an inside run – then got loose on a 17-yard scamper on third and 11.

Palandri capped the drive with his 3-yard scoring run – one of two touchdowns in the game. He finished with 111 rushing yards on 21 carries. Davis called his performance “outstanding.”

Tahoma also put together an eight-minute drive that ate up much of the second quarter, but missed a 28-yard field goal that would have cut the Lancers’ lead to 20-9. Seconds later, Huard connected with Tinae for a touchdown at the 2:13 mark.

“We had a couple of things that did not go our way,” Davis said. “You can’t have that happen with them, because they will just take the momentum and go get it.”

HERE IS A NAME TO REMEMBER, NOW AND LATER, FOR LANCERS OFFENSE

Last season, Richardson was a rotating player in the Kennedy Catholic secondary.

But when Justin Baker graduated last spring and headed off to Cal, the Lancers needed a fourth wide receiver to run with Alexander, Tinae and Shumpert this season.

The 5-foot-11, 170-pound Richardson emerged as the front runner to start in the slot, and not only caught two passes for 29 yards – he caught his quarterback’s eye.

“Replacing Justin Baker is not an easy task … but Lamont did a good job watching him and learning from him,” Huard said. “But I didn’t know who the fourth receiver was going to be.

“Lamont, he hopped up there … and he showed up.