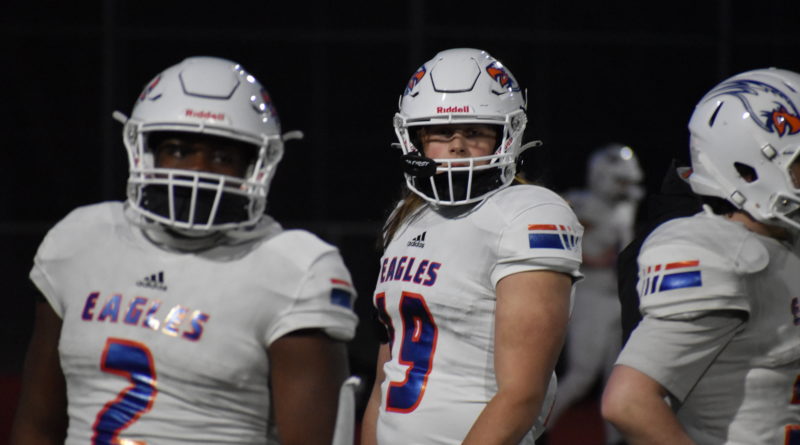 Just ask reigning Class 4A football champion Camas – when you can boast the best offensive line in the state, that usually is a good sign toward sustainable dominance.

And the fourth-ranked Graham-Kapowsin Eagles feel they are just that after their convincing 35-17 victory Thursday night over No. 7 Puyallup in a 4A SPSL showdown at Sparks Stadium.

But it wasn’t easy – the Vikings jumped out to a quick 10-0 lead before the Eagles’ up-front brawn began wearing Puyallup down. Graham-Kapowsin scored 28 unanswered points, getting two rushing touchdowns apiece from Jalen Davenport and Jonas Waugh.

“Our kids responded,” Eagles coach Eric Kurle said. “They did a great job.”

Here are five game observations from Graham-Kapowsin vs. Puyallup:

TALE OF THE TAPE – WHICH TEAM TOOK HOME THE BEST BIG-MEN TAG?

Right off the bat, considering how the Eagles had their way in the second half – Davenport totaled the bulk of his game-high 123 rushing yards after halftime – the answer falls in Graham-Kapowsin’s favor.

But for extended parts of the first half, Puyallup’s defensive front, led by pass rusher Sermon Wilson, and Aho Makaafi and Sir Donye Scott on the interior, dictated the action.

“They are a really good defensive front. They are physical. They get after it. They get into gaps … and our kids had to get used to what they were doing,” Kurle said.

“(Our offensive linemen) felt they got beat in the first half up front. They wanted to respond in the second half – and win it.”

WHEN GRAHAM-KAPOWSIN DRINKS THE ‘JUICE,’ A THIRST IS QUENCHED

Well, Mason shook off a rough season debut against Bellarmine Prep to post a career-day in the victory Thursday.

He had nine receptions for 204 yards, and caught a 52-yard touchdown in which he broke away from two Puyallup defenders for the score.

But the play that his team might be most thankful for came early in the second quarter.

On fourth and 9, the Eagles went for it – and Josh Wood unleashed a pass in the middle of the pass that a diving Mason came down with for a 31-yard gain, setting up Davenport’s first touchdown.

“Coaches told me, ‘Just move past (the dropped passes from the Bellarmine Prep game) – it will come,'” Mason said.

JOSH WOOD CONTINUES TO GROW UP BEFORE OUR EYES

Wood is just three games into his career as the Graham-Kapowsin starting quarterback, and he already looks like a big-time prospect-in-the-making.

In the season opener against Bellarmine Prep, Wood just ran the offense – and did much of his damage off play action in a 28-0 win.

But on Thursday, he displayed a different element to his game – outracing determined defenders to the perimeter to buy time either to complete downfield passes or break loose for long-gaining runs.

Not only is Sanchez the team’s most experienced two-way starter, he is arguably Puyallup’s best all-around player.

He stopped two early Graham-Kapowsin drives with pass deflections – and caught a 43-yard pass from Luke Holcomb that set up Hayden Lovett’s 24-yard field goal for a 10-0 Puyallup lead with 3:13 to go in the first quarter.

But shortly after he knocked away a pass on fourth down, Sanchez came to the sideline limping midway through the second quarter. He had a hamstring injury, and was done for the rest of the night.

His absence was felt – on both ends. The Eagles were able to pay closer attention to top Puyallup receiving target Jordan Dwyer (nine catches, 118 yards, TD) in the second half. And they were able to get their own passing game going without Sanchez around at cornerback.

“(Graham-Kapowsin) played great, but we were down some guys,” Puyallup coach Gary Jeffers said. “We ran out of receivers in the second half, so we were kind of making stuff up as we went.”