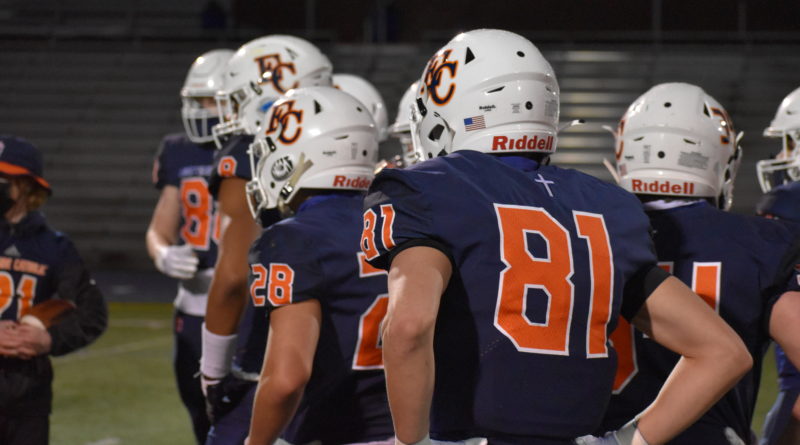 He could see his young team playing well – even beating what many consider the top team in the state in 2020-21, regardless of classification.

But thoroughly dominate the Irish coming off a 15-month layoff?

“I would have laughed if you told me that,” Daste said.

The Irish, which was shut out for the first time since 2010, did not have starting quarterback Milton Hopkins Jr. in the lineup. He will be out with an eligibility issue for the first three games, longtime O’Dea coach Monte Kohler said afterward.

J.T. Tuimoloau is such an easy-going, fun-loving teenager, it’s hard to imagine anything getting under his skin.

But the 6-foot-5, 285-pounder kept seeing the season predictions – and game picks Friday – that his team was the underdog, even as reigning 3A champions.

“We saw the polls … and we came together and said, ‘Hey, we are going to come out and play Crusader ball, and make sure we stick to our game,'” Tuimoloau said, “We were going to make sure and stop them in every series, and that is what we did.”

In terms of gap control, this was easily Eastside Catholic’s best effort in the past three meetings – with Tuimoloau coming off the edge to make a handful of backfield tackles.

He also caught a 39-yard touchdown pass down the right seam, and outraced three O’Dea defenders to the end zone to give the Crusaders a 20-0 lead with 11:52 remaining in the game.

For the past three seasons, Eastside Catholic had a nice thing going in its offensive backfield with top rusher Gio Ursino and all-purpose back Sam Adams Jr.

Both graduated last spring, so the question entering Friday night was who would be the Crusaders’ new lead dog?

Latin-Henley only rushed for 24 yards on seven carries, but he made the Irish defense pay in space by hauling in touchdown catches of 67 and 12 yards – and finishing with five receptions for a team-leading 109 yards.

“He is special,” Daste said. “We are excited for him. He is dynamic and very sudden with the ball in his hands.”

With just seconds remaining in a scoreless first quarter, Latin-Henley got loose along the left sideline on a wheel route – and got behind the defense for his long touchdown to give the Crusaders a 7-0 lead.

And when he got to the end zone, he pointed to the sky – a tribute to his father, who died a month ago.

“It’s been hard,” Latin-Henley said. “I use football to take the pain away. I know it would have meant a lot to him.”

Daste used one work to sum up the Crusaders’ shaky first half – five turnovers and seven procedure penalties.

After an early Muasau fumble, the Irish took over at the Crusaders’ 30 just minutes into the game. But on fourth and 3, the defensive line came crashing in and stopped a run play for no gain.

Same thing happened with 10 minutes remaining in the second quarter. This time, Eastside Catholic held on fourth and 5 from its own 32.

“We have a new defensive coordinator, and Marcus (Ungero) has done a phenomenal job,” Daste said. “We also have a certain familiarity with them. And our defensive line .. dug deep.”

The final stand with seven minutes remaining in the first half was the most impressive as, this time, the Crusaders fumbled inside their own 10.

But the Irish fumbled it away on a third-and-goal run from the 5-yard line, and safety Drew Sanidad recovered the turnover.

“It was huge,” Kohler said. “I thought we had a chance to score, and get some points … and keep some pressure on them.”

When Muasau moved from Hawaii to the Pacific Northwest as a junior, he came into a loaded situation.

“I had a lot of dudes surrounding me,” he said.

Ursion, Adams, tight end D.J. Rogers and Gee Scott Jr. all graduated, and Zion Scott transferred to Sumner, leaving Muasau with a lot of responsibility on his plate to lead the Eastside Catholic offense.

Shaking off three first-half fumbles, Muasau was magnificent in leading the Crusaders to a touchdown on their first second-half series. He completed all four of his passes for 60 yards, capping it with the 12-yard strike to Latin-Henley on a screen pass.

Muasau, a Naval Academy signee, finished 20 of 25 for 252 yards and three touchdowns.

“Seniors are leaders,” Muasau said. “That’s pretty much it.”