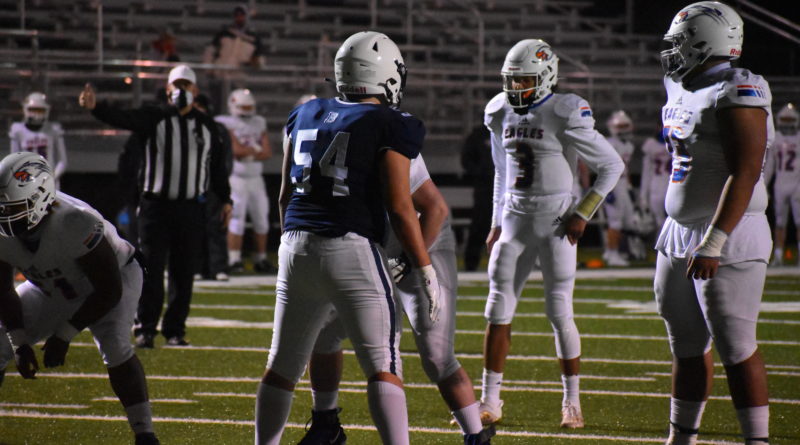 Before returning to become Bellarmine Prep’s football coach, Brian Jensen was in the college game for a while. And he recognizes when an intimidator does its best work on offense.

“It is counter and power (running), with a little bootleg off of it,” Jensen said. “When you run game is good, that stuff all works.”

Talented Graham-Kapowsin sophomore tailback Jalen Davenport rushed for a game-high 111 yards and a touchdown, and fullback Jonas Waugh added three rushing scores as the fourth-ranked Eagles defeated Bellarmine Prep, 27-0, at Memorial Field on Friday night in the 4A SPSL season opener for both teams.

Here are five takeaways from the Graham-Kapowsin-Bellarmine Prep game:

There was a time when all Kurle really did was want to run the football 50 times in a game.

Now blessed with arguably his biggest and most talented offensive line, and three capable rushers, the Eagles can really pound defenses at will.

Time and time again Friday night, when it was third- and fourth-and-short, Kurle did not mess around. He called on Davenport and Waugh to get the hard yards inside.

And early in the fourth quarter, the offense marched 98 yards for its final touchdown on Davenport’s twisting 5-yard plunge with 10:32 remaining.

DAVENPORT MIGHT BE THE STATE’S NEXT GREAT BACKFIELD WORKHORSE

Handing the ball off to Davenport will certainly be a wash-rinse-and-repeat activity this shortened season.

Even though he was making his first career start, the 5-foot-10, 220-pounder runs with a low center or gravity and a hip swivel that you just don’t see every day. He makes hard running look easy.

“I love running the ball, especially when you have a great offensive line ahead of you … making it easy for you to run,” Davenport said.

How important is Davenport to this offense? He will set everything up in the passing game.

And how much were the Eagles holding their breath when he went down on the opening series near the goal-line, holding his leg and screaming?

Kurle was so relieved the injury wasn’t serious that he put his arm around the teenager’s shoulder as he escorted him back to the Eagles’ sideline for a breather.

NOW THAT ‘DANNY U’ HAS GRADUATED FROM PUYALLUP, WAUGH MIGHT BE THE LEAGUE’S TOP TWO-WAY BEAST

Everyone knows how good Waugh is in the middle of the Eagles’ defense at linebacker. He was the 4A SPSL defensive player of the year runner-up to Puyalluo’s Danny Uluilakepa in 2019.

But Waugh is a more-than-capable short-yardage rusher, converting two 1-yard touchdown runs, then breaking loose for 57 yards and a score on a third-and-short run late in the first half for a 20-0 Eagles lead.

“It should be a great year,” Waugh said.

“I get so excited because he is so physical,” Kurle said. “And he’s tough as nails. He was injured in a snowboarding accident a month and a half ago, lost 15 pounds and just came back. How tough is he?”

ALWAYS WELL-COACHED, BELLARMINE PREP HAS UNDERCLASSMEN – AND LOTS OF THEM

Jensen knew coming in that a Friday encounter with the big-and–bad Eagles would be baptism by fire for his top first-time playmakers.

Quarterback Tristan Warner, a junior, is a dual threat with both a good arm – and burst. And it is plainly obvious the Lions will design many targets for 6-foot-3 wide receiver Tariq May, who also starts at cornerback and is the team’s top special-teams returner.

“He is an incredible specimen,” Jensen said.

And for the first time in recent memory, the Lions are starting ninth graders on the varsity football squad. Dylan Wiggins is a big pass-rushing presence at defensive end. Joey Bambrick, a lacrosse standout, is a versatile H-back. And Cole Johnston could emerge as one of the team’s better linebackers.

“(The Eagles) are big and physical … so this was a test to see where we are at,” Jensen said. “We are proud of those guys.”

MAKE NO MISTAKE, GRAHAM-KAPOWSIN HAS AN EYE TOWARD NEXT FALL

Kurle calls these next two months “a build” toward September.

Most of his key performers are juniors, including much of his offensive and defense lines, wide receivers and first-year quarterback Joshua Wood.

“We want to have a great season here for these seniors, but we are also building for the following year,” Kurle said.

It is because the fall of 2021 – assuming WIAA football resumes state playoffs – could be Graham-Kapowsin’s best chance yet at that elusive Class 4A championship.

“We have a lot of work to do,” Kurle said. “But I am excited about these guys.”