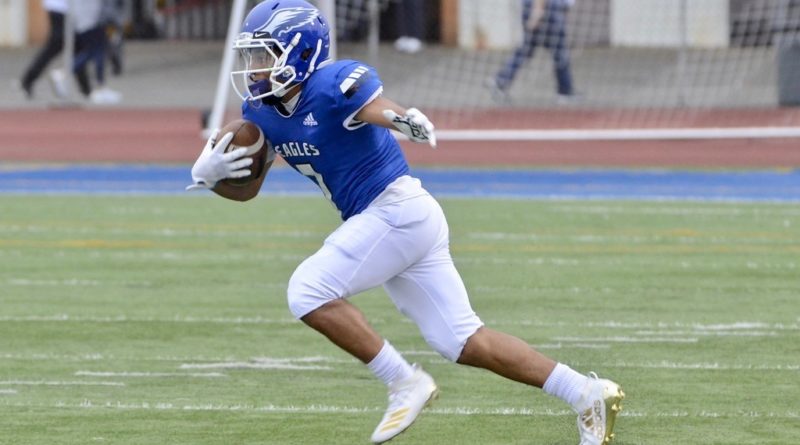 SBLive Washington is previewing the Top 50 high school football teams in the state ahead of the 2020-2021 season. Here’s an inside look at the Federal Way Eagles of the 4A NPSL – No. 27 in our countdown.

7-3 (first place in 4A NPSL Valley); lost to Skyview in the 4A district round.

Outworks defenders to the football, and once he catches it, good luck chasing elusive athlete down.

Long-armed, fast and physical, he is team’s top player – and in charge of manning last level of defense.

It’s been a good past decade for the Eagles, who have won seven or more games in a season seven times – and played high-powered Kennedy Catholic last year in the 4A NPSL championship game.

All of that came under former longtime coach John Meagher, who retired last offseason after 23 seasons – and 123 career wins.

So when it came to finding Meagher’s replacement, the school did not have to look very far in hiring Marcus Yzaguirre, who spent seven seasons as one of Federal Way’s offensive assistants before leaving for Auburn Riverside.

Yzaguirre said the Eagles will continue to run a similar spread offense that Meagher did in his final years.

“We’re a spread team, for sure, but with multi-formations,” Yzaguirre said. “We scrimmaged them every year (when I was at Auburn Riverside), and he took some of the principles I had and ran them last year.”

A Meagher might not be coaching anymore, but very well could be a sideline leader – as in Max Meagher, who has a leg up on the starting QB job. He was the team’s junior-varsity starter a year ago. Tyler Ma’alona, a transfer from Bellarmine Prep, is also in the mix and should see playing time.

Whoever is under center has big-play performers all over the field.

Ronald Davis and Jatavious Magee, both wide receivers, are the bigger names. But Corey Quinn will likely see the most touches on a weekly basis lining up everywhere (running back, slot receiver, quarterback), Yzaguirre said.

“Corey is the most dynamic player we’ll have on the field,” Yzaguirre said.

The one aspect the Eagles might be lacking – one that Yzaguirre thirsts for – this shortened season is a power rushing attack. Tevita Takai is a between-the-tackles bruiser, but that’s it.

While the biggest question mark with the Eagles is their front seven on defense, they should be able to run with any set of wide receivers, led by Magee, a Florida Atlantic signee, at free safety.

And this comes after standout cornerback Damoni Nelson – the team’s vocal leader – was shot to death in early October. Yzaguirre will make sure exciting sophomores Andre Piper-Jordan II (cornerback) and Jaylen Jenkins (safety) get plenty of playing time.

“It’s been tough. … We have not been able to do anything since last March. We are excited to get back out there in the safest manner possible.” – Marcus Yzaguirre