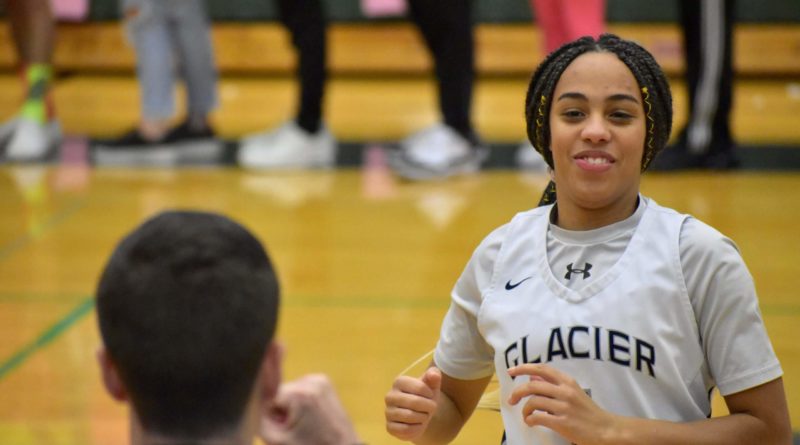 Aaliyah Collins is the first to admit – it was strenuous staying positive.

Halfway through her senior season at Glacier Peak High School, the all-state point guard was without a next-destination home.

Then, it all suddenly picked up like a Midwest windstorm.

Known for her on-ball defense, and high-motor ability in transition, the Grizzlies’ standout finally made that NCAA Division I recruiting connection – with Chicago State University, a member of the Western Athletic Conference.

“It’s been really tough. I had a few D1 offers last summer, but they got pulled because other girls committed sooner. And after that, nothing – dead silent,” Collins said.

“I was in a pretty rough mental state. But always, in the back of my mind, what helped me was staying optimistic and positive.”

It also helps to have a teammate with ties in the world of women’s basketball.

Chris Hansen, the owner of “Elite is Earned” training and tournaments, is the uncle of Glacier Peak guard Malia Smith. He also knew that Chicago State was going through a coaching change, and reached out to new coach Tiffany Sardin about Collins.

Sardin must have liked what she saw, because she contacted Collins a month ago – and offered her a scholarship Sunday night.

“Definitely my defense was one of the things that sold them on me,” Collins said. “But the biggest thing when they were watching game film, they said they … loved how passionate I looked on the court. I love the game.”

“I told her it became the Aaliyah-Van Lith show … and she really made Hailey work,” Hill said.

The good news is Chicago State is an NCAA Division I program. The bad news is for the past few years, it has been one of the worst teams in the country.

But Sardin, a former University of Virginia standout who was the associate head coach last season at Longwood University, is a Chicago native – and part of the city public schools’ athletic hall of fame.

“I believe, and the coaches believe, too, that I can be one of those missing pieces,” Collins said.