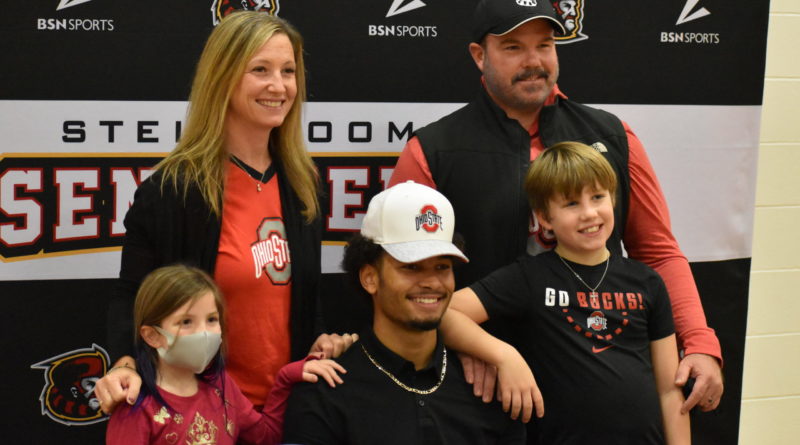 After all the final-days drama settled, three Steilacoom High School football seniors met Wednesday in the school gymnasium to share their dream moment.

*Five-star wide receiver Emeka Egbuka followed up on his Friday announcement by signing with Ohio State.

*The guy that has been delivering Egbuka passes since the fourth grade – quarterback Chance McDonald – made it official with Western Kentucky.

*And the newcomer – linebacker DJ Fryar – went ahead and signed with Arizona, even without a new head coach.

“It is special,” Egbuka said. “Steilacoom is all we know, and we’ve grown up here since we were little.

“I am just happy we were all able to live out our dreams and get college for free.”

For 5 1/2 months, Fryar has had little to worry about since giving a verbal commitment to Arizona in July.

But then the bombshell hit Saturday night: Coach Kevin Sumlin was dismissed from the program.

“I was a little worried,” the three-star Fryar said. “I did not know if my scholarship offer would hold up.”

A few hours after the news, Fryar got a phone call from defensive coordinator Paul Rhoads, who is now the interim coach. Rhoads advised the teenager to give the new-direction program a chance.

“There was some thought about re-opening (my recruiting), but with COVID and a lot of scholarships being taken away, I still thought this was the best choice,” Fryar said.

Fryar said he told Arizona coaches Monday he was still going to sign with the Pac-12 Conference program.

“Once the new coaches come in, I have to rebuild a relationship with them, and go from there,” he said.

McDonald has one Washington teammate in college, who happens to be his competition

The Sentinels’ record-setting quarterback was up at 6:45 a.m. Wednesday to fax in his paperwork.

Unlike Egbuka, who had just announced a college choice five days ago, and Fryar, who went through an unexpected coaching change – McDonald has lived stress-free since become Western Kentucky’s first 2021 commitment back in May.

“I knew back then I had to make a decision pretty fast with all the recruiting going on with quarterbacks,” McDonald said. “Not stressing out was a big relief for me and my parents.”

He is the second Washington high school product on the Hilltoppers’ team. Former all-state quarterback Grady Robison, of Eastlake High School, is a year ahead of McDonald.

The two signal callers have known each other long before reconnecting at Western Kentucky. They share the same quarterback mentor in Lavelle Durant, out of Seattle.

“(Robison) was an important part in my recruiting,” McDonald said. “He’s been able to tell me about the campus, the coaches and the team – before I got to visit a couple months ago.”

And, as McDonald points out, competition is a healthy thing.

“It will take us both to a new level,” he said.