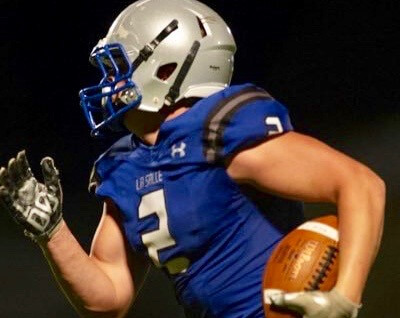 La Salle standout Ryan Kershaw signed his national letter of intent with Washington State on Wednesday morning, surrounded by his parents and older brother, Robby Kershaw, who is a student at Washington State.

There was not big event, assembly or gathering. The signing was anything but ceremonious. He hardly took photos — just a mug against a plain wall in his new school’s apparel.

After all, there was no epic buildup to his commitment. Washington State is his “dream school.” He said as much in May when he committed immediately after receiving an offer. And his excitement to get to campus in Pullman, learn a new position and represent Central/Eastern Washington, is hard to miss.

Kershaw has a week of school left — just finals — before he’s done with high school. In January, he’ll enroll early at WSU to get a head start on his college career, a decision he credits to his eagerness to learn from a coaching staff he grew fond of in the recruiting process.

“In my mind, I want to go (now), all my buddies are going, everyone in my town loves Wazzu, I grew up being a Coug fan,” Kershaw said.

At La Salle, Kershaw was an Associated Press first team 1A all-state pick as a defensive end, racking up 48 tackles, 20 tackles for loss and 10 sacks as a junior. On offense, he played running back. He ran for 1,637 yards (11.7 yards per carry) and 24 touchdowns, leading the Lightning to the 1A state quarterfinals as a 2-seed. Recruiting site 247 Sports labels him a three-star.

Moving up to a Pac-12 school with bigger bodies and a faster speed of play, Kershaw will move over to linebacker, a position he’s never played before.

“When you go to Seattle, everyone wants to be that ‘dude’ and there are a lot of those ‘dudes’ and down here it’s not like that,” Kershaw said. “When you’re that dude down here, it’s different.”

That’s why when Kershaw moves in with five other early enrollees in on Pullman Jan. 15 (classes start Jan. 180, he’s most looking forward to the high bar training with other like-minded, high-level athletes.

He’s one step closer after Wednesday. Now all that stands in the way between Kershaw and Washington State are finals, which he’ll take online next week.

“It’s obviously been a lifelong dream,” he said. “Now that all the puzzle pieces came together, it’s kind of surreal. But it’s great representing for Eastern Washington, not many kids get that opportunity. So I’ll show what I can do.”