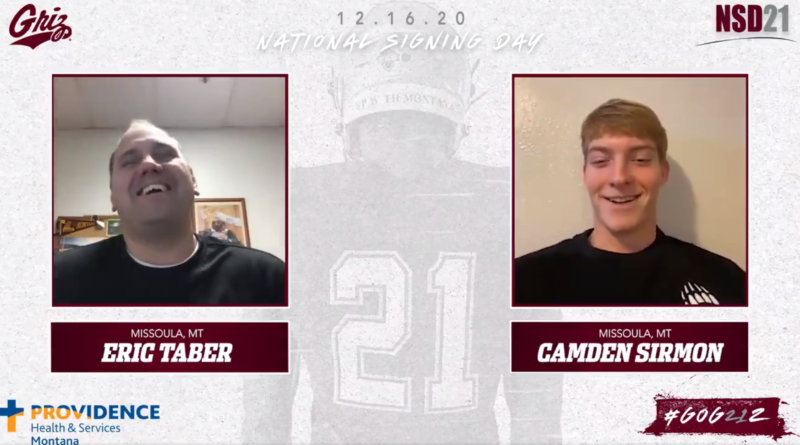 Camden Sirmon woke up on a Saturday morning in late November to take a long-awaited call that would, he hoped, produce the college scholarship offer he’d spent years working for.

Sirmon was following through on a text he received from Justin Green, the recruiting coordinator at University of Montana’s football program, congratulating him on his state championship win the previous day and requesting a phone call the next morning. The day prior, Sirmon helped lead Sentinel High School (Missoula, Mont.) to the program’s first class AA state football championship in 48 years. The Wenatchee transplant sensed his long-awaited offer was coming.

“You can never be sure in recruiting, but I had a feeling,” Sirmon said.

Sirmon signs his letter of intent with the University of Montana on Wednesday afternoon, the first day of the early signing period for football, in a ceremony at Sentinel. Putting pen to paper on his national letter of intent is the cherry on top of a school year preceded by a move from Wenatchee, Wash. to Missoula for the opportunity to play a fall high school football season in hopes it would open the door for a Big Sky scholarship.

Sirmon, a first team all-Big 9 quarterback as a junior, didn’t yet have a Division I offer heading into his senior year. Big Sky coaches he’d spoken to leading up to his senior year told him they needed to see more film in the fall. That opportunity wasn’t going to be available in Washington.

The WIAA pushed the football season to the spring. At the time, the move was a risk with no guarantee of a payoff. Some held out hope a season would happen on schedule in Washington. Sirmon was among the first athletes to doubt those chances enough to move out of state.

Sirmon’s move to Missoula in July came just weeks before fall football camp started at a new school. He had little time to make an impact on a deep, talented team. And he stepped into a quarterback battle with an anticipated starter in senior Dayton Bay.

“It was a mutual respect,” Sirmon said. “He’s a hell of a player. And you’ve got to make the most out of each rep. And I think the competition is actually what drove our offense to be as good as it was, competition with the quarterback position.”

He needed to prove himself. In order to do that, Sirmon kept his head down. He followed how team leaders carried themselves, their work ethics. And he worked — hard.

Sentinel coach Dane Oliver loved the threat Sirmon’s ability to make plays on his feet from under center presented. Sirmon was named the starter and rotated every third drive with Bay. Oliver saw how the quarterback competition, while tense early on, brought out the best in both athletes. They set the bar high and pushed one another.

“I think that was a new experience for Camden, to have to compete for a spot. I think that forced him to grow and improve and he’s a great human being, a great student and he didn’t come in with an arrogant attitude at all, he was just very humble,” Oliver said. “He wanted to blend in, not draw a lot of attention, not rock the boat, just earn it on the field.”

The two took care of the ball. It helped they had talent and depth at the skill positions, and Oliver instructed them not to force the ball if a receiver wasn’t wide open, though often times they were. The offense only had four turnovers all year.

Sirmon passed for just under 1,000 yards and 11 touchdowns opposite two interceptions and rushed for another 900 yards and 11 touchdowns. Sentinel beat Billings West 24-15 on Nov. 20. He was named all-state offensive MVP and first team all-state quarterback. He also played linebacker and special teams, which he hadn’t done since he was an eighth grader. Oliver was impressed at his instincts, particularly in man coverage.

“He’s a heck of a defensive player, Oliver said. “My message (to colleges) was at quarterback, he can play at that level, but if you don’t want him there, he’s a football player first, so it’s OK to take a risk on this kid and plug-and-play wherever you see fit.”

Sirmon is acutely aware of the privilege of having a family that would support his college dreams enough to uproot for it. And his message for the athletes in Washington hoping for a chance to play: Keep working, keep going, never look back.

“I’m just so thankful I had the opportunity to do this,” Sirmon said. “But I still hope there will be an opportunity for all the kids back in Washington, because they deserve it.”

On the phone that Saturday morning, Nov. 21, Green offered Sirmon a scholarship, not as a quarterback, but as an athlete.

Sirmon had gone to bed a state champion. He woke up a Montana Grizzlies pledge, following in the footsteps of his brother, Cy Sirmon, and his uncle, David Sirmon (Bothell quarterback Andrew Sirmon’s father) — both played at Montana.

He’d accomplished what he’d set out to do, and then some. Sirmon’s connected to the Missoula community enough to set down roots in his college town. Even if a season takes place in Washington, he won’t consider returning to Wenatchee in the spring.

“Kind of the end of the journey right there,” Sirmon said after winning the state championship. “And then not 12 hours later, you get your dream phone call. So this is kind of an overwhelming amount of joy. It comes full circle and you realize it was all worth it.”

Sirmon bet on himself. And he won — big.