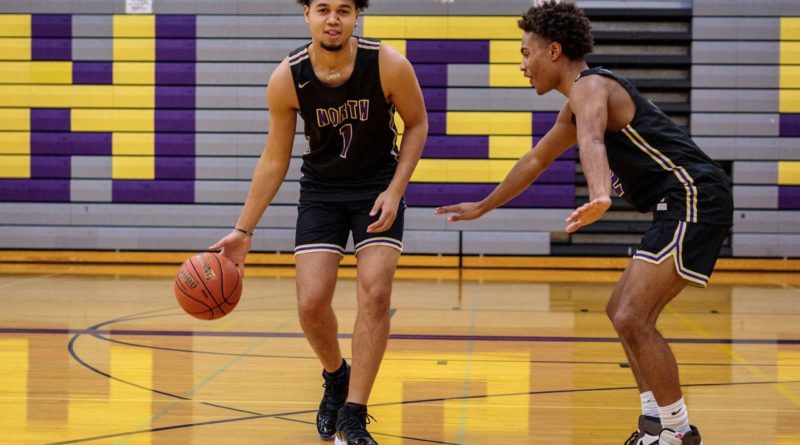 Editor’s note: This is the third of a five-part series on what Scorebook Live has selected as the Washington high school boys basketball story of the year this season. The 2A subject is the North Kitsap Vikings.

At the end of a recent practice, Shaa Humphrey and Kobe McMillian did something they don’t do as much any more, especially not deep in the high school basketball season.

McMillian won, Humphrey conceded, which hasn’t always been the case, even when the two North Kitsap senior guards, who have been step-brothers since they were three years old, and have always bonded through basketball.

“When we were younger, I was always just bigger than him,” Humphrey said. “Then he kind of started growing more, got quicker, so it really just kind of varies.

“We’ve had a couple times (over the years) where we’re throwing balls at each other. It’s fun though.”

These days, Humphrey and McMillian have a bigger task at hand: fulfilling North Kitsap Vikings’ aspirations of a 2A state championship, as they enter the regional round as a 3-seed. Getting back to the tournament, the Vikings say, has been a year in the making.

After a sixth place finish at state a year ago, North Kitsap would return most of its roster that earned a first round bye before being upset by 13-seed Renton in the quarterfinals. In its desire to win a 2A state title, the Vikings (20-3) aren’t just looking to prove something to the those outside their community. They’re looking to prove it to themselves.

“We felt like we were the best team,” McMillian said. “It was a pretty big game, obviously, and we were shocked. That moment has stuck with all of us, and we just remember that we don’t want to feel that again.”

For McMillian and Humphrey, that drive translates from the court to at home.

Neither remember much of life before they become brothers by marriage. But over the years, the two bonded over similar interested, most notably, basketball.

“It was literally all I wanted. I was surrounded by a lot of girls,” McMillian, who has two sisters, said. “It was really nice to have somebody who I could just lean on in any aspect of life.”

In basketball, the two pushed and supported one another as they grew up, most of the time playing on the same club team. If one of them wants to get shots up, they’ll rebound for one another.

And on the court, particularly this season, they complement one another.

Humphrey was the 2A Olympic League MVP as a junior averaging 17 points per game. McMillian was right behind him at 16 points per game. But after Humphrey opened this season with 24 and 27-point scoring nights, he sprained his ankle, which kept him out two games and lingered upon his return.

McMillian has stepped up as the team’s leading scorer (nearly 20 points per game), as has sophomore Jonas La Tour (17.3 points per game) and senior Logan Chmielewski, while Humphrey, who sets up the offense and can do a little bit of everything, dealt with new defensive pressures. In league play, defenders stuck to him. He had to work harder to get open, and relied more and more on screens to help.

“I went down, it’s like, ‘who’s going to step up? Who’s going to do this?’ ” Humphrey said. “Kobe, Jonas and Logan have really stepped up and did an awesome job. I knew there wasn’t a rush. We were going to be in as good place.

But North Kitsap’s strength is in its balance — and experience. The team has played together for long enough to know one another. For McMillian and Humphrey, who will both leave North Kitsap as 1,000-point career scorers, those tendencies have been learned over the course of neatly 15 years. Humphrey knows if he’s driving to the hoop, McMillian will either be in his strong side corner, or trailing behind him.

“We know where each other are,” Humphrey said. “We know where we like to score the ball, we know everyone’s moves and how to get open.”