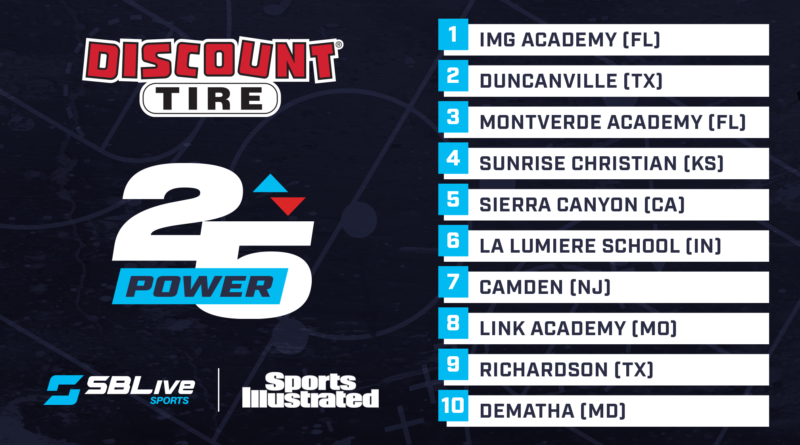 The holiday basketball tournament season saw several cancelations because of COVID-19 – and even winter weather – but there were still plenty of matchups within the SBLive/Sports Illustrated Power 25.

Richardson handed Duncanville its first loss of the season in overtime in a battle of Texas powers; Montverde defended its City of Palms Classic title; and the rest of the top-10 teams that played looked the part, like upstart Link Academy, which swept its way to a Les Schwab Invitational championship.

Finished third in the City of Palms Classic with two Power 25 matchups. Jumped on No. 10 North Little Rock (Ark.) early and never looked back, getting 17 points and seven boards from Eric Dailey Jr., but the Ascenders were bounced out of title contention by Oak Hill thanks to a flurry of third quarter scoring from Judah Mintz and Kentucky-bound Chris Livinston’s 22 points. Wrapped up 2021 with an impressive win over Milton (Ga.) and its dominant backcourt of Kanaan Carlyle and Bruce Thornton.

Football players like five-star Omari Abor returned for the Panthers’ 57-51 win over rival DeSoto, but the real collision of storylines came in the Whataburger Tournament championship game vs. No. 9 Richardson. Kentucky-bound Cason Wallace forced overtime and was a big reason Duncanville lost a back-and-forth thriller, 60-58, even after five-star Anthony Black, a transfer from Coppell (Tex.), became eligible mid-game, quickly suited up and played in the fourth and OT.

Texas-bound Dillon Mitchell’s 16 points, nine boards led the way and an alley-oop finish from Indiana pledge Jalen Hood-Schifino was the exclamation mark to the Eagles defending its City of Palms Classic title from two years ago — the last time the event was held — with a win over No. 20 Oak Hill to cap a week that included wins over Orlando Christian Prep (Fla.) and Milton (Ga.).

Held firm despite not playing in a holiday tournament, boasting a 2021 resume that includes wins over IMG Academy, Oak Hill and La Lumiere. A rematch with Montverde, which dealt SCA its lone loss, looms

The Lakers haven’t played since the Power 25 was last updated due to a flurry of cancelations. Long break ends this week when NIBC play resumes.

Cian Medley (20 points) went 5 for 5 from deep with five assists and three steals and five-star DJ Wagner continues to impress, helping New Jersey’s top-ranked team extend its win streak to 40 games with a 73-41 win over Archbishop Wood (Pa.) in the Slam Dunk to the Beach Showcase (Hoophall East).

Richardson secured perhaps its win of the season in the finals of the Whataburger Tournament in Mansfield, Texas. Kentucky pledge Cason Wallace won tournament MVP honors and did everything his team needed with a 23-point showing in a 60-58 overtime win over No. 2 Duncanville in a battle atop an especially strong Texas landscape, even overcoming the sudden late-game addition of five-star Anthony Black for the Pathers, whose eligibility was reportedly granted midway through the game.

Unexpectedly quiet holiday for the Stags, who pulled out of the Holiday Classic presented by SBLive Sports field in San Diego that included No. 21 Bishop Gorman, Faith Family (Tex.) and Coronado (Nev.). Ultra-competitive WCAC play resumes this week.

Up next: Jan. 4 vs. Westminster Christian (Fla.)

Strong showing at the City of Palms Classic with wins over then-No. 11 Greensboro Day, Orlando Christian Prep (in overtime) behind Central Florida-bound Taylor Hendricks’ 21 points (9 of 11 shooting), five boards and four steals and No. 10 North Little Rock, a game that saw five Eagles in double-figures scoring.

Undefeated since its season-opening loss to Camden. Uber-efficient showings from its best players helped the Lions sweep Hoophall East with a win over Woodrow Wilson (D.C) (UNC-bound Simeon Wilcher 25 points on 9 of 13 shooting; Akil Watson 21 points on 8 of 11 shooting, 5 of 6 from 3) and Gray Collegiate (Wilcher 25 points on 10 of 11 shooting; Jamarques Lawrence 24 points on 10 of 14). Then nabbed another impressive win, handing Bergen Catholic its first loss of the season, 85-70.

The Charging Wildcats had bright spots in the City of Palms Classic with wins over then-No. 16 Dr. Phillips and Whitney Young (Ill.), but couldn’t overcome No. 1 IMG Academy, despite Kel’el Ware’s 22 points and 18 boards, and dropped the fifth place game to No. 15 Calvary Christian. Responded well, sweeping its way to the King Cotton Classic King bracket championship, where they beat Beaumont United (Tex.) 82-72. Arkansas signee Nick Smith Jr. had 33 points and was named tournament MVP.

Lost to AZ Compass Prep in the Signature Series final of the City of Palms, then split its John Wall Invitational slate with a 69-56 win over Virginia Episcopal and a loss to Word of God (N.C.), 83-79. Rebounded with a comfortable win over Virginia Academy on the road behind standout games from A.J. Smith (25 points, nine boards), Patrick Wessler (16 points, 10 boards) and Jayden Epps (12 points, five boards).

Dropped to the City of Palms consolation bracket after a narrow loss to then-No. 12 North Little Rock, then swept its way to a consolation championship with a win over No. 16 Greensboro Day behind Kansas-bound center Ernest Udeh Jr.’s 17 points and 15 boards. After Christmas, Udeh jr. and Florida-bound guard Denzel Aberdeen were named to the Arby’s Classic all-tournament team in Bristol, Tenn. after picking up wins over Volunteer (Tenn.),  Dorman (S.C.) and Jonesboro (Ark.), but lost a shootout with Ja’Kobi Gillespie and Greeneville (Tenn.).

Runner-up finishers at the City of Palms. After 30-piecing Chris Lockett Jr. and Isadore Newman (La.) and Whitney Young (Ill.), Oak Hill beat  Keyonte George and No. 1 IMG Academy behind forward and Kentucky signee Chris Livingston’s 22 point and 19 from Judah Mintz. Mintz also had 22 in a loss to Montverde in the title game, 60-55 — a marked improvement from the 35-point loss the Eagles dealt it on Dec. 2.

Thumped its way to a Jack Tosh Holiday Classic championship, capped by a 21-point showing from Gonzaga commit Braden Huff. The Hilltoppers continue to back up their preseason designation as the top team in Illinois and will have more chances to prove it going forward.

After winning the Tarkanian Classic, Gorman ran the table to win the Holiday Classic presented by SBLive Sports in San Diego, clawing back from a 10-point deficit to force overtime and beat Faith Family of Texas in the National Division title game to stay undefeated. Jase Richardson Jr. had 23 points in the title game and sophomore guard Juni Mobley and senior forward Darrior Williams were named to the first all-tournament team.

The Huskies continue to look the part of one of the nation’s top teams. Beat St. John Bosco, Etiwanda and Crean Lutheran in The Classic at Damien to reach the Platinum Division championship, but the game was canceled due to COVID-19. New Mexico commit Donovan Dent had 27 and 23-point outings, was named to the all-tournament team and drew high praise from his coach.

WCAC play beckons after a quiet holiday season. After bowing out of the Les Schwab Invitational in Oregon on Christmas day due to concerns over COVID-19 and winter weather,  somehow, the Eagles have not played since beating St. Frances Academy on Dec. 12 and are 6-0 behind the stellar play of senior guard Quin Clark, who is averaging a double-double and head coach Steve Turner calls “the most underrated recruit in the country.”

Lost in the first round of the Chick-Fil-A Classic’s National bracket to Denver Prep Academy, 73-64, then responded with  wins over NIBC team Legacy Early College (55-54) and Huntington St. Joseph Prep (W.V.) in the consolation championship. Backcourt mates Bryce Lindsay and Daquan Davis impressed.

Dropped a 13-point loss to Prolific Prep, the California-based prep power, in the Big South Shootout on Saturday in its first game since early December.

Walked away from the City of Palms with two wins (D.C’s St. John’s in overtime and Gill St. Bernard of N.J.) and two losses, both by double-digits to Power 25 teams (Calvary Christian 62-43 and Dr. Phillips, 48-34). Rebounded by winning the HAECO Invitational, of which junior Jaydon Young was named MVP.

After a strong start with a win over No. 23 Long Island Lutheran, Cardinal Hayes was one of many teams around the country to have games canceled over the holidays. Tough tests loom in January, starting with Hoophall South.