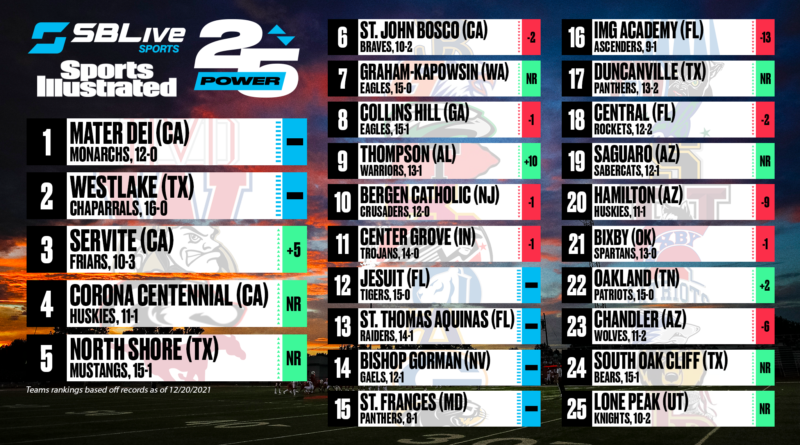 The 2021 high school football season came to an end over the weekend, which means it’s time to release our final rankings of the year.

Mater Dei (Santa Ana, Calif.) and Westlake (Austin, Texas) won state titles to secure their spots at the top of the SBLive/Sports Illustrated Power 25, but there was a ton of movement throughout the rest of the rankings – seven teams moved in, and seven moved out.

Get the complete breakdown of our final 2021 SBLive/SI Power 25 national high school football rankings below.

The SBLive/Sports Illustrated Power 25 rankings are compiled by SBLive reporter Connor Morrissette and SI Director of Football Recruiting John Garcia, Jr. based on observations and conversations with an extensive network of coaching and media sources across the country. These are the final rankings of the 2021 season.

Ranking rationale: Mater Dei won 11 of their 12 games by at least two scores this fall against a national schedule. In their first game of the season, the Monarchs smashed No. 17 Duncanville 45-3 on the road. Mater Dei had a team high seven players selected to SBLive California’s All-State team. They were the clear top dog in high school football across the country this season.

Ranking rationale: Senior Clemson QB commit Cade Klubnik returned from injury late in the year to lead Westlake to a second straight undefeated state championship season and third straight state title overall. Klubnik threw for 280 yards and four passing TDs in the Chaparrals’ 40-21 win over Denton Guyer in the title game. The Chaparrals have won 40 games in a row dating back to 2019. This season, Westlake won every game they played in by at least three scores.

Ranking rationale: After Westlake, any one of Servite, Corona Centennial or North Shore could have come in at No. 3. The Friars get the nod because they advanced to the Southern Section championship game in California and beat No. 6 St. John Bosco 40-21 in the semifinals, which is a better win than Corona Centennial or North Shore had this year. Servite wide receiver/defensive back Tetairoa McMillan won the SBLive California Player of the Year award after putting together one of the best seasons in state history.

Ranking rationale: The Huskies played No. 1 Mater Dei the closest this season losing 21-16 in the Division 1 Southern Section semifinals. Led by a star studded secondary, the Huskies had one of the best defenses in the country this season with Notre Dame signee Jaden Mickey playing CB1.

Ranking rationale: On Sept. 10, North Shore lost 27-21 to Westfield (Houston, Texas), but then rattled off 13 wins in a row to win a state championship and move back into the Power 25. Freshman QB Kaleb Bailey connected with senior wide receiver David Amador on a 40-yard pass in the back of the end zone for the game-winning touchdown in the Mustangs 17-10 state championship win over Duncanville. North Shore has won three state titles in the past four seasons.

Ranking rationale: St. John Bosco failed to make the upper Division championship game in the Southern Section for the first time since 2013 this season, but that streak ending had more to do the talent of Servite than St. John Bosco regressing. The Braves are still one of the clear top teams in the country thanks to a roster with 30 players who have received Division 1 scholarship offers. In the regular season, St. John Bosco beat No. 3 Servite 24-10, before falling to the Friars 40-21 in the playoffs.

Ranking rationale: Graham-Kapowsin was tough to gauge all season because despite putting together an undefeated state championship year, the Eagles didn’t have a national opponent on their schedule. Following their 44-7 state championship win over Lake Stevens, Graham-Kapowsin got their crack at a national opponent in the GEICO Bowl Series in Las Vegas and took full advantage to shock No. 8 Collins Hill 40-36. After being in our “First 10 out” for the final weeks of the regular season and into the playoffs, the Eagles skyrocket to No. 7 to end the year.

Ranking rationale: Jackson State wide receiver/defensive back signee Travis Hunter, the consensus No. 1 2022 recruit in the country, returned from an injury suffered in the regular season on Nov. 19th and the Eagles won a state title in Georgia with relative ease. But they then fell 40-36 to No. 7 Graham Kapowsin in the their GEICO Bowl Series game last week, which dropped Collins Hill a spot in our final rankings.

Ranking rationale: When fully healthy, Thompson steamrolled opponents this year. 2022 QB Conner Harrell, a North Carolina signee, left the Warriors lone defeat this season (24-21 to Hoover on Oct. 22), with an injury in the second quarter. Harrell returned later in the year to lead Thompson to a state title, the school’s third straight. Outside of the Hoover game, Thompson won all of their other 13 games by at least 16 points.

Ranking rationale: Center Grove had a tremendous senior class that was responsible for a 28-0 record and two state titles in the past two seasons. 2022 Tennessee QB signee Tayven Jackson led the Trojans on offense and their top player on defense was 2022 defensive lineman Caden Curry, an Ohio State signee. Center Grove’s best wins came against Cathedral (Indianapolis, Ind.) 21-6 on Oct. 15 and Westfield (Ind.) 27-21 in the state championship on Nov. 27.

Ranking rationale: Jesuit scored one of the upsets of the season when they beat No. 13 St. Thomas Aquinas 24-21 in September and the Tigers haven’t lost since to claim a 6A state championship and No. 1 overall ranking in Florida. Jesuit had one of the best defenses in the country this season thanks in large part to 2022 Clemson signee Wade Woodaz, a safety and 2023 linebacker Troy Bowles. Bowles is the son of Tampa Bay Buccaneers defensive coordinator Todd Bowles.

Ranking rationale: Bishop Gorman should have gone undefeated this season, but blew a 17 point lead with 1:09 to play against No. 20 Hamilton in September to lose 25-24, which was the Gaels only defeat this season. There are 29 two-star or better recruits in Nevada in the Class of 2022, according to 247Sports, and Bishop Gorman has 11 of them on its roster. Four-star edge rusher Cyrus Moss is the team’s top player.

Ranking rationale: St. Frances Academy finished the year on an eight game win streak after falling to No. 13 St. Thomas Aquinas 38-23 to open their season. In their final game of the year, the Panthers beat No. 16 IMG Academy 34-24. St. Frances Academy has four of the top five rated 2022 recruits in Maryland on their roster, according to 247Sports.com. Linebacker Jaishawn Barham, a Maryland signee, is the top ranked player.

Ranking rationale: Following the surprise departure of QB AJ Duffy, the Ascenders turned to freshman quarterback Ryan Downes in their final regular season game against No. 15 St. Frances Academy and lost 34-24. The Ascenders have one of the top rosters in the country, which includes five of the top ten 2022 football recruits in Florida, per 247Sports.com. They also have four of the top ten in the Class of 2023. Prior to the St. Frances loss, IMG had won 19 games in a row.

Ranking rationale: Duncanville started the fall season ranked in the Power 25, but an opening night 45-3 defeat against No. 1 Mater Dei moved the Panthers off of our radar. Following that loss, Duncanville didn’t drop another game until the state championship, so they end the season ranked. The Panthers had one of the best defenses in Texas high school football this season led by 2022 defensive lineman Omari Abor. Their best win came against previously undefeated Carroll (Southlake, Texas) 35-9 in the semifinals.

Ranking rationale: After starting the year 0-2 but hanging tough against No. 6 St. John Bosco and No. 14 Bishop Gorman, the Rockets won 12 games in a row and won their third straight state title in Florida. Central’s top player is 2022 linebacker Wesley Bissainthe, a Miami signee. Central’s best win this season came against American Heritage (Plantation, Fla.) 41-28 on Nov. 19th in the 5A regional semifinals.

Ranking rationale: Saguaro was a team we expected to make the Power 25 this fall (they were ranked No. 25 to start the season), but a September loss to Chaparral, moved the Sabercats out of the rankings until this week. Midway through the year, Saguaro had some transfers become eligible which helped push them to an Open Division championship victory in Arizona. The Sabercats ended No. 23 Chandler’s five year Open Division reign winning 20-15 over the Wolves in the state title game. Saguaro junior QB Devon Dampier had a fantastic postseason. He’s received scholarship offers from Arizona and Northern Arizona.

“Beating Hamilton and Chandler back-to-back. Don’t forget, we’re a 4A (enrollment) school. People forget about that sometimes. But we just took down the blue bloods of Arizona in back-to-back weeks, and I’m pretty damn proud.”

Ranking rationale: Hamilton QB Nicco Marchiol, a West Virginia signee, was arguably the best player in Arizona high school football this season. He willed the Huskies to wins over No. 14 Bishop Gorman and No. 23 Chandler in the regular season. Hamilton fell 31-24 to No. 19 Saguaro in the Open Division semifinals which ended their season.

Ranking rationale: Braylin Presley, an Oklahoma State signee, is one of the top running backs in the country and led the Spartans to a 13-0 record and fourth straight state championship this season. Presley rushed for three touchdowns and threw a touchdown pass in Bixby’s 63-14 state title win over Deer Creek. He had 171 yards on 16 carries and caught five passes for 20 yards in the game. The Spartans have won a state record 49 straight games.

Ranking rationale: Oakland has won 29 games in a row and two straight state titles after beating Summit 43-26 in the Division I Class 6A championship. The Patriots have a ton of talent on offense with 2022 Georgia running back signee Jordan James and 2022 Miami receiver signee Isaiah Horton on the roster. Oakland’s best wins this season came against Trent Dilfer coached Lispcomb Academy (Nashville, Tenn.) and Summit in the state title game. Both of those teams’ only losses came against Oakland.

Ranking rationale: Chandler had its worst season since 2015, but still finishes the season ranked thanks to a 17-7 September victory against Colorado state champion Cherry Creek and close one-score defeats to No. 19 Saguaro (Open Division state championship) and No. 20 Hamilton (regular season). Chandler’s top player this season was 2022 Ohio State signee Kyion Grayes, a wide receiver.

Ranking rationale: South Oak Cliffs lost their regular season opener against No. 17 Duncanville 42-27 and then rattled off 15 wins in a row to claim the 5A Division 2 state championship. The Bears have one of the deepest wide receiver and defensive back groups in Texas high school football led by corner Kyron Chambers (TCU signee).