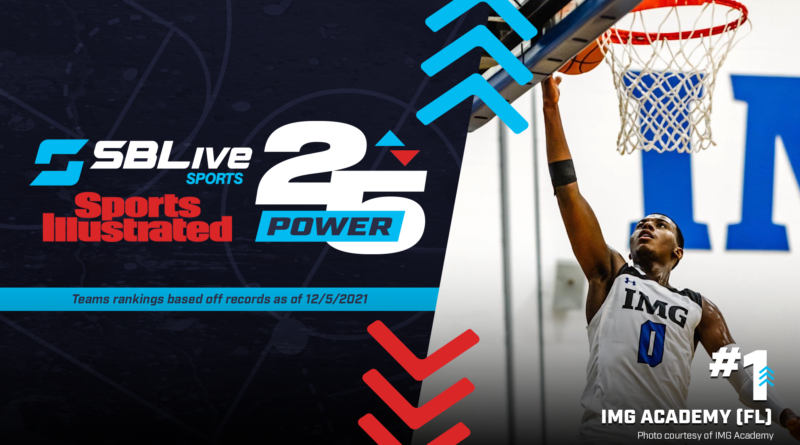 IMG Academy beat Montverde and vaulted to the top spot, but lost to Sunrise Christian, which leapt to No. 3. La Lumiere, which jumped to No. 6 and looked like a top-tier NIBC team after convincing wins over Bishop Walsh, Wasatch Academy and Legacy.

St. Frances of Baltimore made its first big splash, jumping seven spots to No. 15 after beating No. 8 DeMatha in the final game of the D.C. Nike Hoopfest on Sunday. Link Academy (Branson, Mo.) made its Power 25 entrance at No. 16, continuing its torrid 11-0 start by thrashing Dream City Christian (Ariz.) and Denver Prep Academy (Colo.).

Find the complete breakdown of the latest Power 25 national boys basketball rankings below.

Baylor-bound guard Keyonte George notched in a layup in the final seconds to upend top-ranked Montverde, 65-64, then beat Oak Hill (87-75) after losing to Sunrise Christian (68-62) in a series of much-awaited three-day NIBC season tipoff showdown.

Defeated IMG Academy 68-62 and Oak Hill 64-61 before losing to Montverde by nine in its third NIBC game in three days. Big weekend for five-star forward Mark Mitchell, who had 22 and 19 points in the first two games.

Beat Rock Hill (Tex.) on the road, then ran away from Zachary (La.) behind 20 points and nine boards from junior forward Ron Holland and beat Carver Collegiate Academy (La.) behind Anthony Black’s 31 points (95-52) in the Red River Hoopfest in Texarkana.

Beat Memorial of Frisco (78-59) and Southlake Carroll (73-46) convincingly ahead of a matchup with Texas Class 6A Coppell.

Dropped its first game in weeks to strong Georgia 7A opponent Pebblebrook, 64-47, in a game  where its scorers couldn’t find a flow. Junior Seth Fitzgerald’s 15  points leading the way. It was the Eagles’ first game since two players were arrested on murder charges.

Took its first loss of the season to Moravian Prep (N.C.) behind 15 points from AJ Smith and bounced back with a blowout win over Hamilton Height Christian Academy in the Tyler Lewis Hoopfest in Lewisville, N.C.

Has not started its season. The NJSIAA regular season starts Dec. 15.

The Hilltoppers’ hot start continued with two home wins — a 73-36 win over DeKalb (Ill.) and a 71-34 win over Lyons Township (Ill.) Friday night, in which Princeton-bound senior Caden Pierce had a team-high 23 points.

Beat Legacy Early College (62-60) and Bishop Walsh (78-68), but lost to La Lumiere by 29 points in the NIBC season tipoff. The road doesn’t get easier for the Tigers, who take on Nevada power Centennial (with its former point guard Ricky “Pop Pop” Isaacs), prep powerhouse AZ Compass Prep and Montverde this week. And head coach Paul Peterson loaded up the schedule for a reason.

Beat La Academia (Pa.) 74-25, then suffered its first loss of the season to Power 25-ranked DeMatha by 15 points in the D.C. National Hoopfest Saturday, 77-62. The Patrick School chose  not to play Westtown on Sunday “it was brought to our attention that a member of the opposition presented a health and safety dilemma,” the team wrote on Twitter.

Impressive start to the season for the young Gaels, who hadn’t played an official game since the 2019-20 season. They swept their way to a tournament championship in the WildWest Shootout at Reno’s Bishop Manogue, beating Folsom (Calif.) 56-50, Manogue 78-41 and Jesuit of Carmichael, Calif. 78-30. Senior guard Ryan Abelman was named tournament MVP, sophomore combo guard Jase Richardson had 26 against Manogue and John Paul Mobley hit five 3s in the first half on his way to 26 points against Jesuit.