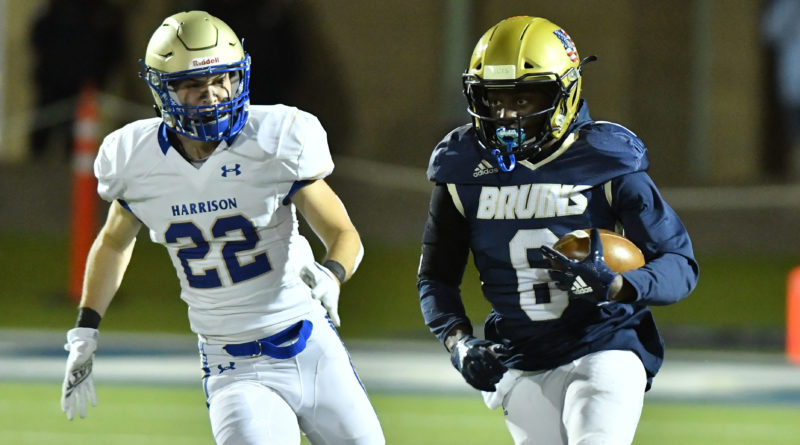 Here are the performances that caught our eye for Thanksgiving week.

Lacey rushed 19 times for 241 yards and three touchdowns to lead Pleasant Grove to a 47-17 win over Fairview in the 5A semifinals.

Woods threw for 180 yards and two touchdowns and rushed for 154 yards and two more TDs in a 44-16 win over Hillcrest-Tuscaloosa in the 6A semifinals.

The senior Northwestern commit totaled 366 yards of offense and four touchdowns in a 38-28 win at Greenbrier.

The junior completed 30-of-47 passes for 368 yards and 4 touchdowns, while adding 95 more yards on the ground with another score, in the Bulldogs’ 45-35 win over Little Rock Parkview.

East dominated with three touchdown catches from Tre Dimes, a pick-six, and another interception in a 49-21 victory over Merced.

Dallas threw for 339 yards and five touchdowns, including three to his brother Josh, in a 56-7 win over Darlington.

Perry rushed for nearly 300 yards and five touchdowns, including 71- and 66-yard TD runs in the third quarter, in a 49-21 win over Jones County.

LaRose carried the ball 15 times for 189 yards and three touchdowns to lead South to a 50-6 win over Worcester North. His performance put him at 2,905 rushing yards for the season, which is a Massachusetts single-season state record.

Coffey did most of his damage on the ground as he has most of the year, running for 382 yards and six touchdowns, while adding one touchdown through the air in the 56-28 win over King City.

Sperling had 270 yards rushing on 30 carries in a 31-24 win over Avon, giving the junior 1,290 yards rushing and 20 touchdowns in the playoffs alone. Heading into the Division II state championship game Thursday, he needs 187 yards rushing for a 3,000-yard season.

Deere caught five passes for 133 yards and three TDs while picking off four passes on defense in the Ironheads’ 31-14 win at previously undefeated Oklahoma Christian School in the 2A quarterfinals.

Montiel completed 28 of 44 passes for 439 yards and five touchdowns — giving him 50 for the season — to help the Pirates outslug Marist Catholic in the OSAA Class 4A championship game.

Friday’s game against Austin Bowie saw Dubose complete 16 of 26 passes for 319 yards and six touchdowns in a 59-36 victory. He also ran for 78 yards and a touchdown on 14 carries to help Brennan become the last San Antonio-area team standing in the 6A playoffs.

Paul ran for 439 yards and six rushing TDs, both career highs, on 33 carries in a 55-13 win over Dallas Bishop Lynch to help Dallas Parish Episcopal advance to the TAPPS Division I state semifinals.

Hellums ran 38 times for 311 yards and three rushing TDs in a 35-21 win against Rockwall Heath on Friday to help Tomball advance to Round 4 of the Texas high school football playoffs for the first time since 1985.

Completed 13 of 16 pass attempts for 323 yards, two passing touchdowns and three rushing scores in a 35-14 win over Lynden Christian.

Rushed for 150 of his game-high 182 yards and three touchdowns in the first half of a 27-3 semifinal win over Marysville-Pilchuck.