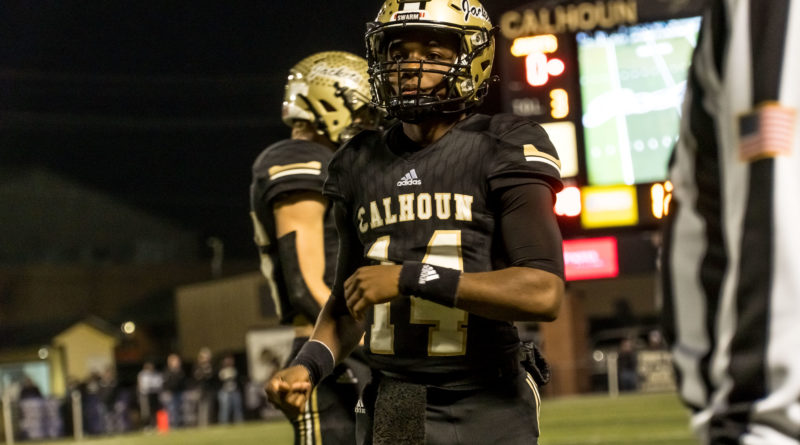 Here are some stars from Friday night’s second-round games across Georgia.

Pictured above is Calhoun quarterback Christian Lewis (photo by Willie Prince), who threw for 447 yards and three touchdowns in a 49-42 win at Ware County.

Carter came up with the stop on Cartersville’s fourth-and-goal attempt during the final minute of the game, and he forced a turnover earlier in the game after recording a sack in the 24-17 win.

Brown threw for 196 yards and a score, the game-winning touchdown pass, while rushing for another score on the ground. On defense, he played safety in the fourth quarter and came up with an interception to seal the 35-34 win.

Horn threw for 216 yards and four touchdowns in a 48-6 win over Pebblebrook.

Poole caught six passes for 152 yards and two scores in a 35-34 loss to Lowndes.

Silva kicked three field goals, including the game-winner in the 17-14 win over North Gwinnett.

Brown threw eight passes for 169 yards and a score while adding 104 yards and three touchdowns on the ground in a 42-13 win over Douglas County.

Evans finished with 136 yards rushing and two touchdowns in a 43-21 win over Alcovy.

Bolden caught a touchdown pass and recovered a blocked punt in the end zone for a score in a 44-7 win over Lovejoy.

Langston Hughes took a 21-6 lead going into the half after a 64-yard punt return touchdown from Shelley in a 28-8 win over Shiloh.

Durham led Johns Creek to its first quarterfinal berth in school history after throwing two touchdown passes and rushing for another score in a 45-14 win over Evans.

Holloman recorded the only defensive touchdown of the night when he returned an interception for a touchdown in a 45-10 win over Kennesaw Mountain.

Lett threw three touchdown passes, including the game-winner that broke a 34-34 tie with 10 seconds remaining in a 41-34 win over St. Pius X.

Thomas scored four touchdowns in the first quarter and one in the second in a 63-7 win over Luella.

Bouie caught a touchdown pass and returned an interception 90 yards for a score in a 48-7 win over Northwest Whitfield.

Bell rushed for 300 yards and five touchdowns in a 49-0 win over Dawson County.

Mitchell caught a touchdown pass and returned a kickoff for a touchdown in a 24-21 win over Monroe Area.