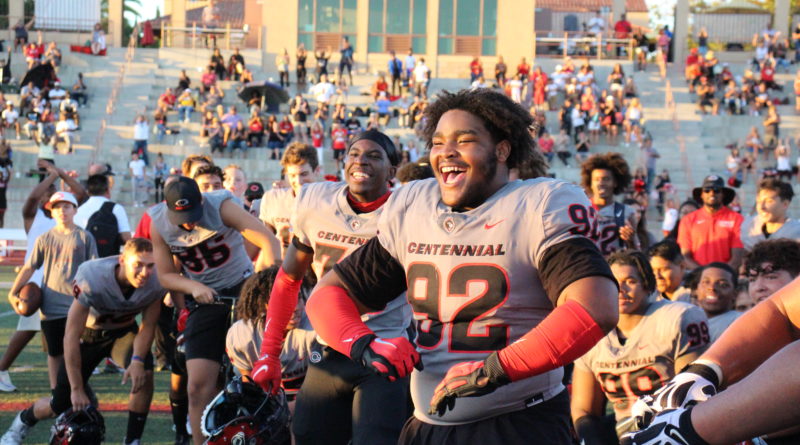 Here’s a closer look at the top high school football games from around the country being played Thursday through Saturday with an emphasis on what their results mean for the Power 25.

Bishop Gorman should roll in this game, but it’s a state championship so it makes the list.

It’s been six years (2015) since Centennial last beat Mater Dei. Since that game, Mater Dei has become arguably the best high school football program in the country. If Centennial wins this week, it would would be a major upset.

This is a championship level game because these teams don’t compete in their respective state’s football playoffs plus it’s each team’s last game of the year. IMG and St. Frances are both loaded with talent. This should be a great one with massive rankings implications.

When these teams met earlier this season, St. John Bosco held Servite to their worst offensive output of the year. What will the Friars do differently on Friday night?

This may be the last chance for Noah Fifita and Tetairoa McMillan, two of the best players in Servite history, to beat one of the two big dogs in California high school football (St. John Bosco and Mater Dei).

2023 Jesuit linebacker Troy Bowles and his teammates haven’t allowed a point in their last five games. Can 9-1 Braden River change that?

American Heritage may have three losses, but they’re still one of the top teams in Florida. Central is on upset alert this week even after winning eight games in a row.

When these teams met in the regular season, Hoover won 24-21 which snapped Thompson’s 27-game win streak. The Buccaneers made a key play late in the fourth quarter to come out on top. Thompson QB Conner Harrell left the game with an injury, but is now healthy. This game will be one of the best of the week nationally in high school football.

Dutch Fork has won all ten of their games by at least 29 points so far this year. As the Silver Foxes get deeper into the playoffs, that number has to eventually get lower, right? We’ll see this week against 10-1 Sumter.

On paper, Oakland has more talent than Lebanon, but this week’s game will be one of the tougher tests the Patriots have faced all year. Lebanon hasn’t lost since August.

Junior North Cobb quarterback Malachi Singleton is one of the top signal callers nationally regardless of class. If North Cobb is really a Power 25 team, Singleton leads the Warriors to a win here.

Aledo has been in the 26-35 ranking range nationally in our eyes for weeks. A few more signature wins could propel the Bearcats into the Power 25 and this week’s game certainly fits that description. Beating Liberty would be a marquee result.

This is a win and you’re in Power 25 game. It’s that simple. If Corner Canyon wins, they’ll return to the rankings and if Lone Peak wins for the second time this season over Corner Canyon, they’ll debut. A victor in this game gives the winner the resume boost required to make the Power 25.

Graham-Kapowsin is one of the teams that will need an undefeated state championship season to warrant Power 25 consideration at the end of the year due to not playing any national programs in 2021. Every playoff game from here on out for the Eagles is a must win.

Auburn kept its game against No. 3 IMG Academy close before ultimately losing 27-17 earlier this year. That game came three weeks after Auburn fell to Central 21-7. The winner of this week’s playoff game will stay on our Power 25 radar.

Dillard’s only loss this season came against No. 13 St. Thomas Aquinas 23-13 in October. That result kept the Panthers on the Power 25 bubble, but Dillard will need to beat 9-1 Homestead this week to stay there. The Broncos haven’t lost since August.

One of these teams will lockdown a major resume boosting win in this game. Warner Robins’ top players are 2022 Vanderbilt wide receiver commit Daveon Walker and 2023 defensive lineman Vic Burley. Cartersville, while undefeated, doesn’t have any ranked players in the 2022 and 2023 247Sports high school football recruiting rankings.

Loyola Academy hurt their Power 25 chances when they could only manage a 3-0 victory over Lincoln Way-East, the No. 9 seed, in a quarterfinal playoff game a week ago. In the semifinals, we need to see some style points from the Ramblers against Lockport.

Westfield’s only loss this season came against No. 23 Cathedral 14-0 when the the teams met in August. If the Shamrocks win this week, they’ll most likely meet No. 10 Center Grove in the 6A championship game in Indiana next week in a win and you’re in Power 25 game.

The four games in Texas listed above won’t bump the winning team into next week’s Power 25, but it will eliminate the loser from future Power 25 consideration.