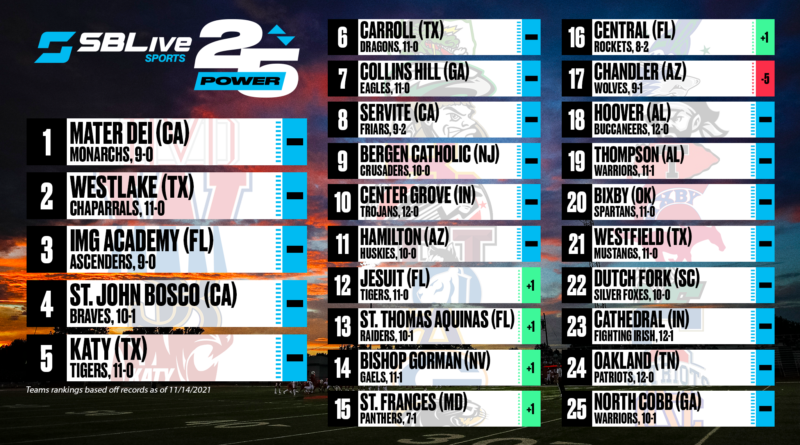 Every Power 25 team is now into the postseason, except for No. 3 IMG Academy (Bradenton, Fla.) and No. 15 St. Frances Academy (Baltimore, Md.), who aren’t eligible to compete in their state’s respective playoffs. The two teams meet on Friday though in a championship-esque showdown.

Once the playoffs wrap up in every state, we will release our final postseason SBLive Power 25 rankings on Monday, Dec. 20.

Ranking rationale: In the first half last Friday, Norco fought hard against Mater Dei, but the No. 1 Monarchs went on to roll thanks to sophomore QB Elijah Brown throwing six touchdowns. Against a national schedule, Mater Dei has won every game they’ve played by at least two scores this season.

Ranking rationale: Senior Clemson QB commit Cade Klubnik returned from injury two weeks ago and threw three touchdowns in Westlake’s 63-21 win over rival Lake Travis. This past week, he threw three more TD’s in the first round of the playoffs. Westlake, last year’s 6A Division 1 state champ in Texas, has won all 11 of their games in blowouts this year.

Ranking rationale: St. John Bosco used their high powered rushing attack made up of of senior tailbacks Rayshon Luke, Jabari Bates and Michael Hayes as well as junior QB Pierce Clarkson to rush for over 500 yards and seven touchdowns in their first round playoff win over Los Alamitos. The Braves are playing well right now and will feel like they can win a state title in California.

Ranking rationale: Katy stayed undefeated with a 56-7 win over Fort Bend Clements last week in the first round of the playoffs. Like they’ve done all season, the Tigers used a dominant defense and run game to win. Katy, last season’s 6A D2 state champ in Texas, looks to be on a collision course with No. 2 Westlake. If those teams meet, it would be in the regional finals.

Ranking rationale: Carroll won its 11th straight game last week in the first round of the playoffs. Junior QB Kaden Anderson threw three touchdowns and junior running back Owen Allen rushed for three scores in the win. The Dragons lost in last season’s 6A Division 1 state championship to Westlake, but haven’t lost since. Carroll continues its 6A D1 state title quest this week against Midland Legacy.

Ranking rationale: Even without star WR/CB Travis Hunter (injury), Collins Hill had an easy time in the first round of the playoffs. 2022 Missouri QB commit Sam Horn completed 19 of 23 passes for 257 yards and two touchdowns in the win. He also rushed for two scores. The Eagles are the clear No. 1 team in Georgia.

Ranking rationale: Servite lost to No. 4 St. John Bosco 24-10 to end the regular season three weeks ago and now the Friars will play the Braves again in the semifinals of the Division 1 Southern Section playoffs. In Servite’s quarterfinal win over Santa Margarita, senior receiver/defensive back Tetairoa McMillan intercepted three passes. He’s playing like the California Player of the Year with his contributions on both sides of the ball.

Ranking rationale: Bergen Catholic has earned four shutouts in their last seven games and last week, the Crusaders held Donovan Catholic to seven points in the first round of the playoffs. This week, Bergen Catholic will play St. Peter’s Prep, a team they beat 21-0 earlier this season. Crusaders senior running back Ryan Butler, a Princeton commit, scored two touchdowns in that game. Expect Bergen Catholic to finish the season undefeated. They’re the best team in New Jersey and there isn’t a particularly close No. 2.

Ranking rationale: Center Grove came close to losing their first game of the season as Lawrence North gave the Trojans everything they could handle, but some key special teams plays gave Center Grove a 29-19 win. Jackson Griffin returned a punt for a touchdown in the victory and Caden Curry, one of the top defensive lineman prospects in the 2022 class, had three tackles for loss and a rushing touchdown. The Trojans are trying to win their second straight upper division state title in Indiana this season.

Ranking rationale: There’s a new top team in Arizona, the Hamilton Huskies. Last season, Hamilton lost on a last second missed chip shot field goal against Chandler in the Open Division championship game. The Huskies got revenge last week as they took down Chandler 21-14 to win the 6A Premier Section title and end the Wolves 45-game win streak that dated back to 2018. Hamilton won the game mainly on defense as they logged 11 sacks.

The two teams will most likely meet in the Open Division state championship game next month.

Ranking rationale: Jesuit scored one of the upsets of the season when they beat No. 13 St. Thomas Aquinas 24-21 in September. The Tigers have one of the top defenses in Florida led by 2023 linebacker Troy Bowles, a national recruit. Bowles blocked a punt in Jesuit’s 50-0 first round playoff win over Boca Ciega last week.

Ranking rationale: St. Thomas Aquinas earned a No. 1 seed in the 7A playoffs in Florida and rolled to a 43-7 win over Atlantic in the first round. Star St. Thomas Aquinas running back Anthony Hankerson rushed for 108 yards and three touchdowns in last week’s playoff win. He’s received scholarship offers from Arizona and Florida. The Raiders lone loss on the season came against No. 13 Jesuit.

Ranking rationale: Bishop Gorman rolled to a 35-14 win over rival Liberty in the semifinals of the 5A playoffs last week. There are 29 two-star or better recruits in Nevada in the Class of 2022, according to 247Sports, and Bishop Gorman has 11 of them on its roster, with four-star edge rusher Cyrus Moss leading the way. Moss made six tackles in last week’s win with one coming for loss. The Gales lone loss this season came against No. 11 Hamilton 25-24 in September.

Ranking rationale: St. Frances Academy has won seven games in a row since falling to No. 13 St. Thomas Aquinas 38-23 to open their season. The Panthers have four of the top five rated 2022 recruits in Maryland on their roster, according to 247Sports.com. Linebacker Jaishawn Barham is the top ranked player. In a game with massive rankings implications, St. Frances Academy plays No. 3 IMG Academy in their final regular season game later this month.

Ranking rationale: After starting the year 0-2 but hanging tough against No. 4 St. John Bosco and No. 14 Bishop Gorman, the Rockets have won eight games in a row. Central’s top player is 2022 linebacker Wesley Bissainthe. This week, the Rockets play a star studded American Heritage team in a game they must win to stay in next week’s Power 25.

Ranking rationale: After three weeks of winning ugly, Chandler finally lost a game. No. 11 Hamilton took down the Wolves 21-14 to end Chandler’s 45-game win streak that spanned back to 2018. The Wolves go into the Open Division playoffs in Arizona as the No. 2 seed. The last year Chandler didn’t win a state title was in 2015.

Last result: 24-23 win over Hewitt-Trussville (Trussville, Ala.) (7A playoffs)

Ranking rationale: Hoover debuted three weeks ago following their 24-21 victory over No. 19 Thompson that snapped the Warriors’ 27-game win streak. The Buccaneers made a key play late in the fourth quarter to come out on top. Those two teams will now meet again in the semifinals following Hoover’s 24-23 overtime win over Hewitt-Trussville in the quarterfinals. After Hoover scored first in overtime, Hewitt-Trussville matched them with a TD – then went for the win on a two-point conversion. The pass fell incomplete, giving Hoover a one-point win. Hoover’s top player is 2022 Northwestern QB commit Bennett Meredith.

Ranking rationale: 2022 North Carolina quarterback commit Conner Harrell is back for Thompson after he left the Warriors’ 24-21 loss to No. 18 Hoover three weeks ago with an injury. He split time with sophomore QB Zach Sims and threw one touchdown in last week’s 45-7 quarterfinal playoff win over Oak Mountain. Harrell returns at the perfect time as Thompson now has a rematch against Hoover this week in the semifinals. Thompson is trying to win its third straight state title in Alabama.

Ranking rationale: Braylin Presley, an Oklahoma State commit, is one of the top running backs in the country and has led the Spartans to an 11-0 record so far this season. Presley scored one of Bixby’s eight rushing touchdowns in the Spartans 78-7 win over Putnam City North in the first round of the playoffs last week. Bixby went 11-0 and won the 6A-II state championship in Oklahoma last season.

Ranking rationale: Westfield debuted in the Power 25 last month and since then, the Mustangs have outscored their opponents 309-35. They’re the No. 4 team in Texas with their best wins coming against North Shore and Spring. 2022 Tulsa QB commit Cardell Williams is playing like one of the top QB’s in Texas. If Westfield wins their next two playoff games, they’ll most likely face Duncanville in a ‘win and you’re in’ Power 25 game in the 6A D1 quarterfinals in Texas.

Ranking rationale: Dutch Fork lost a lot of talent to graduation coming into the season, but the Silver Foxes have won all ten of their games by at least 29 points so far this year. They’ve won their last two playoff games by a combined 112-0 score. Dutch Fork’s top player is 2022 receiver Antonio Williams. He’s one of the top players nationally in the 2022 recruiting class.

Ranking rationale: Cathedral lost a defensive battle 21-6 to No. 10 Center Grove in their regular season finale, but have bounced back in the first four rounds of the 5A playoffs in Indiana with wins over Terre Haute North Vigo, Plainfield, Decatur Central and New Palestine. Cathedral won the 5A state championship in Indiana last season and they’re now two wins away from repeating as state champions. Cathedral’s top player is 2023 defensive lineman Kendrick Gilbert. He’s received scholarship offers from several Big 10 schools including Michigan and Penn State.

Ranking rationale: Oakland finished the regular season undefeated to claim their seventh straight district title. In their second round playoff win over Shelbyville Central, 2022 Miami commit Isaiah Horton caught a touchdown and returned an interception for a touchdown. The Patriots won a state title in Tennessee last season and are now trying to repeat.

Ranking rationale: North Cobb has rattled off ten wins in a row which include victories over Milton and Walton, two top ten teams in Georgia. The Warriors got a few key players back from suspension to beat Camden County 44-6 in the first round of the playoffs last week. 2023 QB Malachi Singleton had a huge game rushing for touchdowns of 44 and 50 yards.