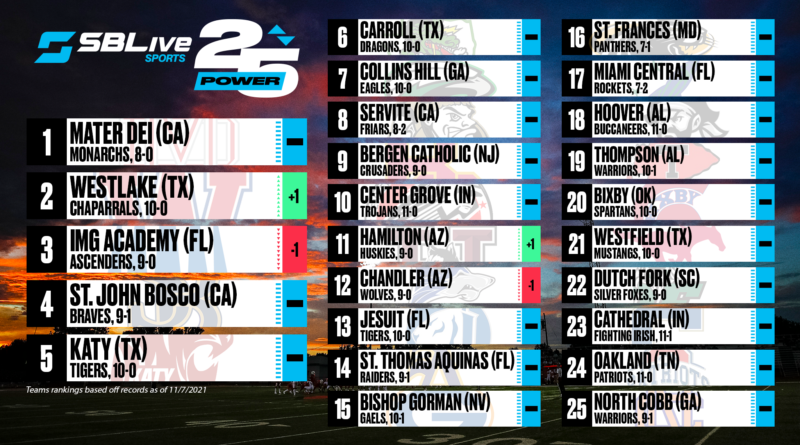 Every high school football team ranked in last week’s SBLive Power 25 won, so there isn’t much movement in this week’s rankings. But there is a big showdown looming in Arizona.

Westlake (Austin, Texas) moves up to No. 2 in the latest SBLive Power 25 rankings following a dominant 63-21 win over Lake Travis (Austin, Texas) and Hamilton (Chandler, Arizona) jumps to No. 11 after beating Higley (Gilbert, Arizona) 58-17. Westlake and Hamilton move ahead of IMG Academy (Bradenton, Florida) and Chandler (Arizona) respectively due to beating their opponents by larger margins.

In one of the most anticipated matchups in the country this Friday, No. 11 Hamilton will host No. 12 Chandler in the final week of the regular season in Arizona.

Ranking rationale: Mater Dei firmed its grip on the No. 1 ranking with a 46-37 win over No. 8 Servite three weeks ago. Against a national schedule, Mater Dei has won every game they’ve played by at least two scores this season.

Ranking rationale: Senior Clemson QB commit Cade Klubnik returned from injury and threw three touchdowns in Westlake’s rivalry win over Lake Travis. The Chaparrals moved up to No. 2 last week since they’ve won all nine of their games in blowouts.

Ranking rationale: St. John Bosco used a dominant defensive performance to beat No. 8 Servite 24-10 two weeks ago. The Braves will feel like they can win a state title in California with the playoffs beginning this week following their big win.

Ranking rationale: Servite lost to No. 4 St. John Bosco 24-10 to end the regular season 8-2. The Friars, who have had one of the top offenses in the nation this season led by Arizona QB commit Noah Fifita, were held to their lowest point total of the season in the game. They’ll most likely meet St. John Bosco in a rematch in the semifinals of the playoffs in three weeks.

Ranking rationale: Center Grove won its second round playoff game over Columbus North with ease. Tennessee QB commit Tayven Jackson threw one touchdown in the win. The Trojans had four rushing scores in the game.

Ranking rationale: Hamilton QB Nicco Marchiol, a West Virginia commit, is playing like the Arizona high school player of the season for the state’s No. 2 team. In Hamilton’s 58-17 win over Higley, Marchiol completed 18 of 22 passes for 280 yards and three TD’s. Hamilton plays No. 12 Chandler to end their regular season this week. The Huskies move up a spot in the rankings this week because they’re playing better football thank Chandler coming into the game.

Ranking rationale: Jesuit scored one of the upsets of the season when they beat No. 14 St. Thomas Aquinas 24-21 in September. In their 42-0 win over Tampa Catholic last week, senior running back Joquez Smith rushed for two touchdowns. Smith has received scholarship offers from Cincinnati, Maryland and USF.

Ranking rationale: St. Thomas Aquinas earned a No. 1 seed in the 7A playoffs in Florida. The Raiders lone loss on the season came against No. 13 Jesuit. Star St. Thomas Aquinas running back Anthony Hankerson has rushed for 620 yards and eight touchdowns this season. He’s received scholarship offers from Arizona and Florida.

Ranking rationale: There are 29 two-star or better recruits in Nevada in the Class of 2022, according to 247Sports, and Bishop Gorman has 11 of them on its roster, with four-star edge rusher Cyrus Moss leading the way. The Gaels beat up Foothill 63-6 last week in a 5A playoff play in game.

Ranking rationale: St. Frances Academy has won seven games in a row since falling to No. 14 St. Thomas Aquinas 38-23 to open their season. The Panthers have four of the top five rated 2022 recruits in Maryland on their roster, according to 247Sports.com. Linebacker Jaishawn Barham is the top ranked player. In a game with massive rankings implications, St. Frances Academy plays No. 3 IMG Academy in their final regular season game later this month.

Ranking rationale: After starting the year 0-2 but hanging tough against No. 4 St. John Bosco and No. 15 Bishop Gorman, the Rockets have won seven games in a row including their 49-6 victory over Northwestern two weeks ago. Central’s top player is 2022 linebacker Wesley Bissainthe.

Ranking rationale: Hoover debuted two weeks following their 24-21 victory over No. 19 Thompson that snapped the Warriors’ 27-game win streak. The Buccaneers made a key play late in the fourth quarter to come out on top: “Hoover quarterback Bennett Meredith, who played through a tweaked knee injury, sent the Buccaneers home happy with an eight-yard touchdown to Jabari Gaines with 14 seconds left. Meredith orchestrated the 81-yard scoring drive with just over three minutes remaining.”

Meredith is one of the top rated recruits on Hoover’s roster. He’s committed to Northwestern.

Hoover won big in their first round playoff win over Sparkman. If the Buccaneers beat Hewitt-Trussville in round two, a team they took down 34-10 in the regular season, that will potentially set up a rematch with Thompson.

Ranking rationale: 2022 North Carolina commit Conner Harrell left Thompson’s 24-21 loss to Hoover two weeks ago with an injury and didn’t play in last week’s first round playoff win over Florence. If he’s out for the rest of the playoffs, the Warriors will have a much tougher time winning a state title, like they have the last two seasons.

Ranking rationale: Braylin Presley, an Oklahoma State commit, is one of the top running backs in the country and has led the Spartans to a 10-0 season so far. Bixby went 11-0 and won the 6A-II state championship in Oklahoma last season.

Ranking rationale: Westfield debuted in the Power 25 last month and since then, the Mustangs have outscored their opponents 254-14. They’re the No. 4 team in Texas with their best wins coming against North Shore and Spring. 2022 Tulsa QB commit Cardell Williams is playing like one of the top QB’s in Texas.

Ranking rationale: Dutch Fork lost a lot of talent to graduation coming into the season, but the Silver Foxes have won all nine of their games by at least 29 points so far this year. Dutch Fork’s top player is 2022 receiver Antonio Williams. He’s one of the top players nationally in the 2022 recruiting class.

Ranking rationale: Cathedral lost a defensive battle 21-6 to No. 10 Center Grove in their regular season finale, but have bounced back in the first three rounds of the playoffs with three wins over Terre Haute North Vigo, Plainfield and Decatur Central. Cathedral won the 5A state championship in Indiana last season and they’re favorites to win it again this year.

Next game: Nov. 12 vs. Shelbyville Central (Shelbyville, Tenn.) (Division I Class 6A playoffs)

Ranking rationale: Oakland finished the regular season undefeated to claim their seventh straight district title. In their first round playoff win over Warren County, University of Georgia commit Jordan James rushed for three touchdowns. The Patriots won a state title in Tennessee last season and are now trying to repeat.

Ranking rationale: North Cobb has rattled off nine wins in a row which include victories over Milton and Walton, two top ten teams in Georgia. The Warriors weren’t at their best in last week’s 12-7 win over North Paulding due to having multiple players suspended but they still came out on top and stay in this week’s Power 25. Freshman QB Nick Grimstead led North Cobb to the win.