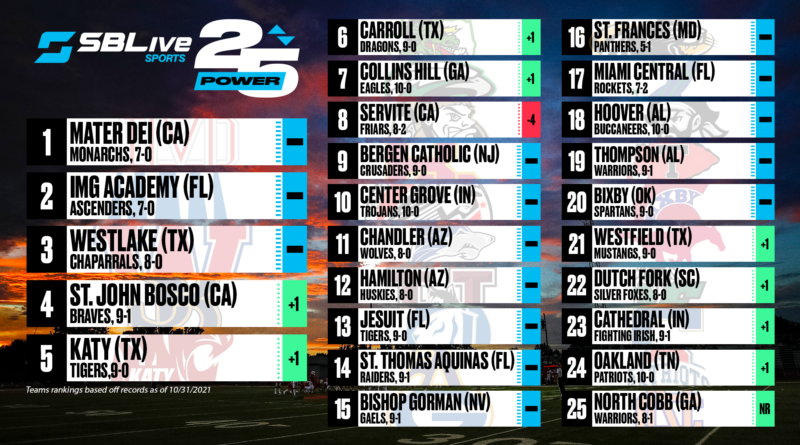 After reeling off eight consecutive victories – including a 35-9 win over Marietta on Friday – North Cobb (Kennesaw, Ga.) makes its 2021 debut in the SBLive Power 25 national high school football rankings.

North Cobb’s best victories during the streak have come against in-state foes Milton and Walton. The Warriors are currently the No. 2 ranked team in Georgia behind No. 7 Collins Hill.

Baton Rouge Catholic (La.), last week’s No. 21 team, dropped out of the rankings this week after losing to Baton Rouge Woodlawn (La.) 35-28.

Ranking rationale: Mater Dei firmed its grip on the No. 1 ranking with a 46-37 win over No. 8 Servite two weeks ago. Against a national schedule, Mater Dei has won every game they’ve played by at least two scores this season.

Ranking rationale: The Ascenders struggled to take down Auburn, but eventually won 27-17. Auburn led 17-13 after three quarters before star IMG running back Kaytron Allen rushed in the game clinching TD with under a minute to play.

Ranking rationale: Even without senior QB Cade Klubnik, who picked up an injury last month, Westlake is still dominating in Texas. The Chaparrals moved up to No. 3 last week since they’ve won all nine of their games in blowouts.

Ranking rationale: St. John Bosco used a dominant defensive performance to beat No. 8 Servite 24-10 last week. The Braves will feel like they can win a state title in California with the playoffs beginning next week following their big win.

Ranking rationale: Katy stayed undefeated with a 67-17 win over Katy Taylor last week. Running back Seth Davis ended the game with 285 yards and four touchdowns. Davis is putting together one of the best seasons out of any Texas high school football tailback. Defensively, the most points Katy has allowed in a game this season is 21.

Ranking rationale: Carroll won their ninth straight game last week 42-7 over Timber Creek. The Dragons lost in last season’s 6A Division 1 state championship to Westlake, but haven’t lost since. Carroll is once again very talented and may go on to win that crown this season.

Ranking rationale: Servite lost to No. 4 St. John Bosco 24-10 to end the regular season 8-2. The Friars, who have had one of the top offenses in the nation this season, were held to their lowest point total of the season in the game. They’ll most likely meet St. John Bosco in a rematch in the semifinals of the playoffs in three weeks.

Ranking rationale: For the second straight week, Chandler was almost upset. QB Blaine Hipa was intercepted twice, but the Wolves hung on to beat Casteel 21-17 on Friday. Chandler, last season’s upper division state champion in Arizona, relied on their running game to beat Casteel. Anyale Velazquez rushed for 178 yards and two touchdowns in the win

Ranking rationale: Hamilton QB Nicco Marchiol, a West Virginia commit, is playing like the Arizona high school player of the season for the state’s No. 2 team. In Hamilton’s 32-12 win over Highland, Marchiol completed 25 of 30 passes for 263 yards and five TD’s. Hamilton plays No. 11 Chandler to end their regular season on Nov. 11.

Ranking rationale: Jesuit scored one of the upsets of the season when they beat No. 14 St. Thomas Aquinas 24-21 in September. In their 56-0 win over King last week, senior running back Joquez Smith rushed for a 30-yard TD.

Ranking rationale: St. Thomas Aquinas picked up a good win against a talented Dillard team 23-13 two weeks ago. Star STA running back Anthony Hankerson rushed for 151 yards and two touchdowns in the victory.

Ranking rationale: There are 29 two-star or better recruits in Nevada in the Class of 2022, according to 247Sports, and Bishop Gorman has 11 of them on its roster, with four-star edge rusher Cyrus Moss leading the way. The Gaels beat up Faith Lutheran 51-0 last week earning their sixth straight shutout.

Ranking rationale: St. Frances Academy has won six games in a row since falling to No. 14 St. Thomas Aquinas 38-23 to open their season. The Panthers have four of the top five rated 2022 recruits in Maryland on their roster, according to 247Sports.com. Linebacker Jaishawn Barham is the top ranked player.

Ranking rationale: After starting the year 0-2 but hanging tough against No. 4 St. John Bosco and No. 15 Bishop Gorman, the Rockets have won seven games in a row including last week’s 49-6 victory over Northwestern. Central’s top player is 2022 linebacker Wesley Bissainthe.

Ranking rationale: Hoover debuted last week following their 24-21 victory over Thompson that snapped the Warriors’ 27-game win streak. The Buccaneers made a key play late in the fourth quarter to come out on top: “Hoover quarterback Bennett Meredith, who played through a tweaked knee injury, sent the Buccaneers home happy with an eight-yard touchdown to Jabari Gaines with 14 seconds left. Meredith orchestrated the 81-yard scoring drive with just over three minutes remaining.”

Meredith is one of the top rated recruits on Hoover’s roster. He’s received scholarship offers from Appalachian State and Toledo.

Ranking rationale: 2022 North Carolina commit Conner Harrell left last week’s 24-21 loss to Hoover with an injury. If he’s out for the playoffs, the Warriors will have a much tougher time attempting to three-peat as state champs.

Ranking rationale: Braylin Presley, an Oklahoma State commit, is one of the top running backs in the country and has led the Spartans to a 9-0 season so far. Bixby went 11-0 and won the 6A-II state championship in Oklahoma last season.

Ranking rationale: Westfield debuted in the Power 25 last month and since then, the Mustangs have outscored their opponents 191-0. They’re the No. 4 team in Texas with their best wins coming against North Shore and Spring. 2022 Tulsa QB commit Cardell Williams is playing like one of the top QB’s in Texas.

Ranking rationale: Dutch Fork lost a lot of talent to graduation coming into the season, but the Silver Foxes have won all eight of their games by at least 29 points so far this year. Dutch Fork’s top player is 2022 receiver Antonio Williams. He’s one of the top players nationally in the 2022 recruiting class. The Silver Foxes were on a bye last week.

Ranking rationale: Cathedral lost a defensive battle 21-6 to No. 10 Center Grove in their regular season finale, but have bounced back in the first two rounds of the playoffs with two blowout wins over Terre Haute North Vigo and Plainfield. Cathedral won the 5A state championship in Indiana last season and they’re favorites to win it again this year.

Ranking rationale: Oakland finished the regular season undefeated and claimed their seventh straight district title after beating Rockvale 49-21. University of Georgia commit Jordan James rushed for 60 yards and two touchdowns in the win The Patriots are the No. 1 team in Tennessee.

Ranking rationale: In their first game of the season, North Cobb fell to a good Buford team 35-27, but since then the Warriors have rattled off eight wins in a row which include victories over Milton and Walton, two top ten teams in Georgia. North Cobb has four seniors ranked in the Top 50 of 247Sports’ 2022 in state recruiting rankings. University of Georgia commits Marquis Groves-Killebrew (cornerback) and De’Nylon Morrissette (wide receiver) are the two top ranked Warriors.