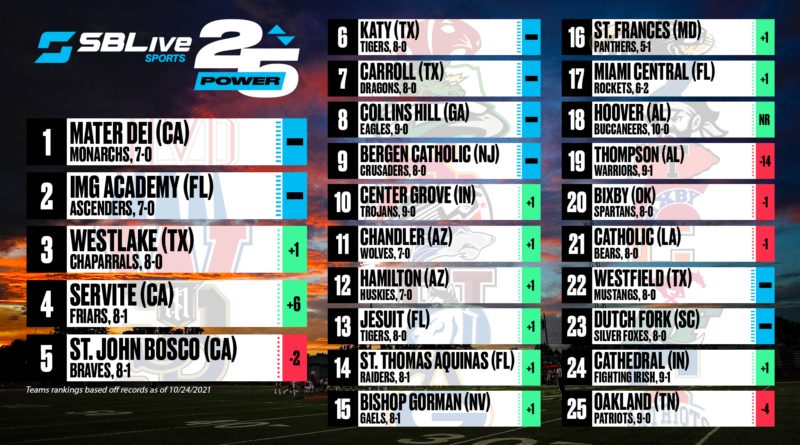 Hoover (Alabama) makes its 2021 debut in the SBLive Power 25 after upsetting rival Thompson 24-21 on Friday. Thompson came into the game ranked No. 5 and riding a 27-game winning streak.

Hoover is now 10-0 and will almost certainly enter the postseason as the No. 1 team in Alabama in a few weeks. Quarterback Bennett Meredith had a big game, passing for 280 yards and three touchdowns – including the game-winning TD pass to Jabari Gaines with 14 seconds left.

St. John’s (Washington D.C.) dropped out of the rankings this week despite beating DeMatha (Hyattsville, Md.) 14-7. The Cadets lack a signature national win, but could certainly return to the rankings in the future.

Ranking rationale: Mater Dei firmed its grip on the No. 1 ranking with a 46-37 win over Servite on Saturday night.

Ranking rationale: Even without senior QB Cade Klubnik, who picked up an injury three weeks ago, Westlake is still dominating in Texas. The Chaparrals move up to No. 3 this week.

Ranking rationale: Servite lost to No. 1 Mater Dei 46-37, but played the Monarchs closer than any team since 2019, so they move up to No. 4. For three and a half quarters, the Friars went shot for shot with Mater Dei. Senior Arizona commit Noah Fifita completed 26 of 41 passes for 306 yards and two touchdowns in the loss. Senior Oregon commit Tetairoa McMillan snagged 15 receptions for 163 yards and two touchdowns.

Ranking rationale: Prior to losing to No. 1 Mater Dei 42-21 on Oct. 1, St. John Bosco had rolled through their non-league schedule which included three of the top teams in the country in No. 17 Central (Fla.), East (Ill.) and Oscar Smith (Va.). The Braves beat Santa Margarita 41-16 last week. Senior running back Rayshon Luke scored three touchdowns.

Servite played Mater Dei closer than St. John Bosco did, so the Braves move down this week.

Ranking rationale: Katy stayed undefeated with a 49-3 win over Cinco Ranch two weeks ago. Running back Seth Davis ended the game with 188 yards and four touchdowns. Davis is putting together one of the best seasons out of any Texas high school football tailback. Defensively, the most points Katy has allowed in a game this season is 21.

Ranking rationale: Kaden Anderson threw two touchdown passes and ran for two more to lead Southlake Carroll to a 47-24 win over Eaton in a key District 4-6A matchup Thursday night.

The Dragons lost in last season’s 6A Division 1 state championship to Westlake. Carroll is once again very talented and may go on to win that crown this season.

Ranking rationale: Even without star WR/CB Travis Hunter (injury), Collins Hill shutout Mountain View 28-0. 2022 Missouri QB commit Sam Horn completed 22 of 29 passes for 253 yards and a touchdown in the win. Collins Hill plays their toughest game of the regular season this week in their finale on the road against undefeated Mill Creek.

Ranking rationale: For weeks, Bergen Catholic had been relying on their talented defense to win games, but last week the Crusaders turned to their offense. 2022 Notre Dame commit Steve Angeli threw two touchdowns, but it was 2022 Princeton commit Ryan Butler who stole the show rushing for 240 yards and three TD’s in Bergen Catholic’s 38-28 win over Seton Hall Prep. Expect Bergen Catholic to finish the season undefeated. They’re the best team in New Jersey and there isn’t a particularly close No. 2.

Next game: Oct. 29 vs. Franklin Central (Indianapolis, Ind.) (6A playoffs)

Ranking rationale: In the game of the week in high school football across the country two weeks ago, Center Grove beat No. 24 Cathedral 21-6. 2022 Tennessee QB commit Tayven Jackson threw a TD and rushed for a second score. Defensively, 2022 lineman Caden Curry had three tackles for loss.

Ranking rationale: After struggling against Queen Creek for a half, Chandler won the second half 20-0 in their victory over the Bulldogs last week. QB Blaine Hipa completed 13 of 23 passes for 243 yards and three TD’s in the win. Chandler won the Open Division championship in Arizona last season and are once again the No. 1 team in the state.

Ranking rationale: Hamilton QB Nicco Marchiol is playing like the Arizona high school player of the season for the state’s No. 2 team. In Hamilton’s 63-10 win over Desert Vista two weeks ago, Marchiol completed 23 of 31 passes for 333 yards and five TD’s. The West Virginia commit also rushed for a score. Hamilton plays No. 11 Chandler to end their regular season on Nov. 11.

Ranking rationale: Jesuit scored one of the upsets of the season when they beat No. 14 St. Thomas Aquinas 24-21 last month. In their 44-0 win over Blake, senior running back Joquez Smith rushed for 110 yards and two scores on only seven carries.

Ranking rationale: There are 29 two-star or better recruits in Nevada in the Class of 2022, according to 247Sports, and Bishop Gorman has 11 of them on its roster, with four-star edge rusher Cyrus Moss leading the way. The Gaels beat up Foothill 59-0 last week earning their fifth straight shutout.

Ranking rationale: St. Frances Academy has won five games in a row since falling to No. 14 St. Thomas Aquinas 38-23 to open their season. The Panthers have four of the top five rated 2022 recruits in Maryland on their roster, according to 247Sports.com. Linebacker Jaishawn Barham is the top ranked player.

Ranking rationale: After starting the year 0-2 but hanging tough against No. 5 St. John Bosco and No. 15 Bishop Gorman, the Rockets have won six games in a row including last week’s 41-6 victory over North Miami Beach. Central’s top player is 2022 linebacker Wesley Bissainthe.

Ranking rationale: Hoover debuts this week following their 24-21 victory over Thompson that snapped the Warriors’ 27-game win streak. The Buccaneers made a key play late in the fourth quarter to come out on top: “Hoover quarterback Bennett Meredith, who played through a tweaked knee injury, sent the Buccaneers home happy with an eight-yard touchdown to Jabari Gaines with 14 seconds left. Meredith orchestrated the 81-yard scoring drive with just over three minutes remaining.”

Meredith is one of the top rated recruits on Hoover’s roster. He’s received scholarship offers from Appalachian State and Toledo.

Ranking rationale: 2022 North Carolina commit Conner Harrell left last week’s 24-21 loss to Hoover with an injury. If he’s out for the playoffs, the Warriors will have a much tougher time attempting to three-peat as state champs.

Ranking rationale: Braylin Presley, an Oklahoma State commit, is one of the top running backs in the country and has led the Spartans to a 8-0 season so far. Bixby went 11-0 and won the 6A-II state championship in Oklahoma last season.

Ranking rationale: Westfield debuted in the Power 25 three weeks ago. They’re the No. 4 team in Texas after starting 8-0 with impressive wins against North Shore and Spring. 2022 Tulsa QB commit Cardell Williams is playing like one of the top QB’s in Texas.

Ranking rationale: Dutch Fork lost a lot of talent to graduation coming into the season, but the Silver Foxes have won all eight of their games by at least 29 points so far this year. Dutch Fork’s top player is 2022 receiver Antonio Williams. He’s one of the top players nationally in the 2022 recruiting class.

Ranking rationale: Cathedral lost a defensive battle 21-6 to No. 10 Center Grove two weeks ago but bounced back in the first round of the playoffs with a 56-0 beatdown against Terre Haute North Vigo. Cathedral won the 5A state championship in Indiana last season and they’re favorites to win it again this year.

The Patriots move down this week despite the victory due to lacking a signature national win and having a few close games with other teams from Tennessee this season.