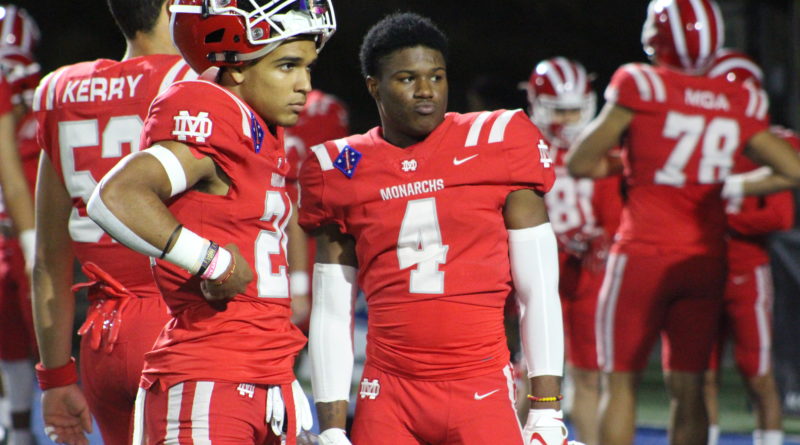 Here are the performances that caught our eye for Oct. 21-23.

Meredith threw for 280 yards and three touchdowns – including the game-winning TD pass to Jabari Gaines with 14 seconds left – to lift Hoover to a 24-21 upset of Thompson, the No. 5 team in SBLive’s Power 25 national rankings.

Brown rushed for 163 yards and a touchdown in No. 1 Mater Dei’s highly entertaining 46-37 win over No. 10 Servite, in what was arguably the best high school football game of the fall 2021 season.

Coronado went nuclear again, throwing for 500 yards and seven touchdowns to lead the Jaguars over Manteca 58-41. He also ran for 38 yards and a touchdown.

Gaines-Smith helped lead the Grizzlies to a 35-14 win over Clovis West with 176 rushing yards, two rushing touchdowns, 35 receiving yards, a rushing two-point conversion, and an interception he returned 26 yards.

Sabb had a 98-yard pick-six on the opening series of the game to set the tone for IMG in their 49-8 win over East St. Louis.

Milton running back Jordan McDonald rushed for 132 yards and three touchdowns on 10 carries in a 44-34 win over Roswell, in addition to throwing and catching a TD. He celebrated Saturday by announcing his commitment to Central Florida.

Piqua running back Jasiah Medley carried 16 times for 297 yards and four touchdowns in a 49-6 win over Stebbins to help the Indians finish the regular season 9-0.

Keene intercepted four passes, returning one of those for a touchdown, in the Broncos’ huge 47-41 win at Owasso. He also forced a fumble, recovered another fumble and was in on five tackles.

The Irish’s Brock Thomas blocked a game-winning field goal attempt on the final play to lift Sheldon to a 49-47 win over Roseburg. Thomas ran for one touchdown, passed for three touchdowns and intercepted a two-point conversion attempt.

Gordon, an Oklahoma State commit, carried the ball 29 times for 295 yards and five touchdowns in a 49-21 win over Weatherford. He also had two receptions for 76 yards.

Graham, a Gonzaga baseball commit, scored four touchdowns in four different ways in a 63-28 win over Hanford. He had a passing TD, a receiving TD, a rushing TD and a punt return TD. He was also 7-for-7 on PATs.

McGill rushed 15 times for a single game school record 234 yards and two touchdowns, including an 80-yard touchdown run (also the longest run in program history), and went 11 for 22 passing for 151 yards and two more touchdowns in a 38-21 win over Skyline.