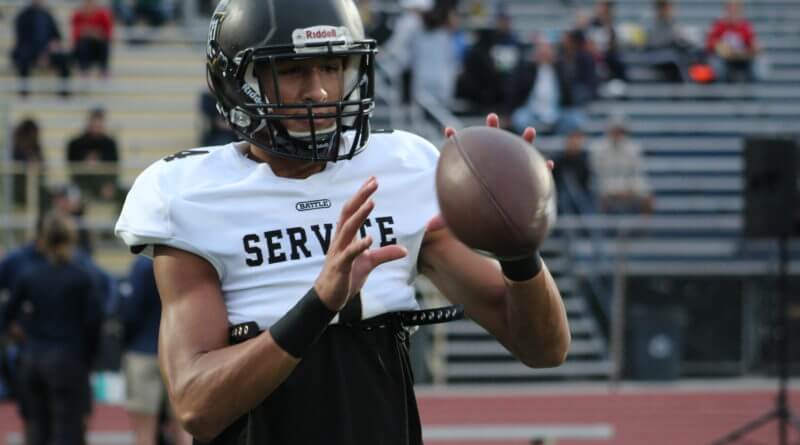 East is currently ranked just outside of the Power 25 while IMG is the No. 2 team in the country. This game pits Illinois’ No. 1 2022 prospect, receiver Luther Burden, against Florida’s No. 1 2023 prospect, defensive lineman James Smith.

It’s rare to see a state’s No. 1 team against a state’s No. 2 in the regular season, but that’s what will happen this Friday in Alabama when Thompson travels to Hoover. Thompson’s top player is 2022 defensive lineman Jeremiah Alexander, an Alabama commit. Hoover’s is 2023 cornerback Dale Miller.

This game will be Chandler’s biggest challenge of the 2021 season so far. Their top player is 2022 Ohio State commit Kyion Grayes, a receiver. The player to watch for Queen Creek is 2023 linebacker Porter Reynolds.

This is a massive game in the Washington D.C. area. St. John’s broke into the Power 25 last week and needs to win this week to stay in. DeMatha’s one loss this season came against Pennsylvania’s Imhotep Charter 14-10 in September.

Guyer lost to Allen (Texas) 38-31 last week. The Wildcats need to beat Boyd this week to stay on our Power 25 radar.

Last week, King lost to Atascocita, a team on our Power 25 radar, 42-21. This week, North Shore, another team on the outside looking in of the Power 25, takes on King. Will they win by a similar margin?

Milton needs to win this game to stay on our Power 25 radar. The Eagles are loaded with talent led by tight end Jack Nickel, a Michigan State commit and quarterback Devin Farrell, a Virginia Tech commit, but they lost to North Cobb 40-21 in late August.

Male is the No. 1 team in Kentucky and it will most likely take an undefeated state championship season for them to make the Power 25, so by default, this week’s game against Bullitt East is a must win.

Bolles is in a similar spot to Male (Ky.), they’re going to need to stay undefeated and win a state championship to prove they’re Power 25 worthy. This is another must win.

Cocoa’s one loss this season came against Venice 21-20. So far this fall, the Tigers have proven they’re one of the top teams in Florida and should beat undefeated Spruce Creek to stay on the Power 25 periphery. Cocoa’s top player is 2022 QB Davin Wydner. He’s received a scholarship offer from Georgia Tech, in addition to a few other schools.

The winner of this game will stay on our Power 25 radar. Both squads are top ten teams in Florida.

Maryville is a Top 50 team in the country according to one prominent high school football ranking system, so they’re on our radar. This is a must win game for the Red Rebels’ Power 25 hopes.

This is the game of the week nationally in high school football. Both teams are loaded with Division 1 talent and the No. 1 Power 25 ranking is on the line.

Bergen Catholic’s defense has played exceptionally well so far this season led by 2022 cornerback Jaeden Gould, a USC commit and Jayden Bellamy, a Notre Dame commit. Expect the defensive domination to continue this week even against a talented 6-1 Seton Hall Prep team.

A big win for Venice in this game could see the Indians ranked in the Power 25 for the first time this season. No. 15 St. Thomas Aquinas beat Cardinal Gibbons 39-14 last week. Can Venice win by a similar margin?