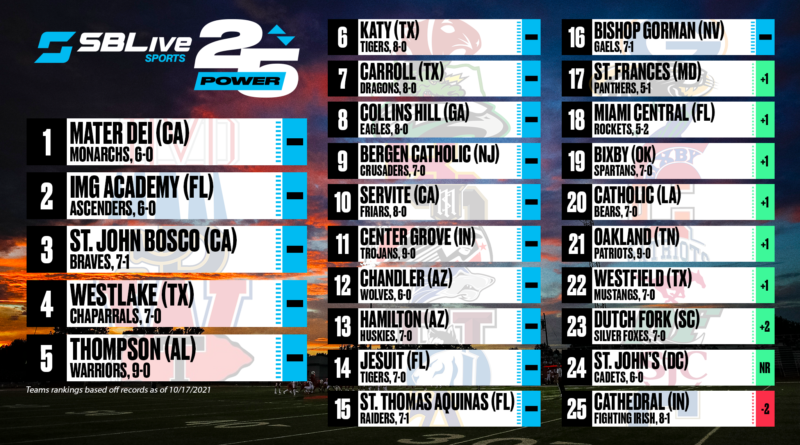 Guyer (Denton, Texas) dropped out of the rankings this week after losing 38-31 to Allen (Texas).

Ranking rationale: Sophomore quarterback Elijah Brown won his 11th start in a row as the Monarchs rolled to a 56-3 win over a good Santa Margarita team. Mater Dei’s beaten Duncanville and No. 3 St. John Bosco this season.

Ranking rationale: Prior to losing to No. 1 Mater Dei on Oct. 1, St. John Bosco had rolled through their non-league schedule which included three of the top teams in the country in No. 18 Central (Fla.), East (Ill.) and Oscar Smith (Va.). The Braves beat Orange Lutheran 49-25 last week. Senior running back Rayshon Luke scored four touchdowns.

Ranking rationale: Following last year’s 6A Division 1 championship, Westlake is still the No. 1 team in Texas and they’ve been playing like it — even without senior QB Cade Klubnik, who picked up an injury two weeks ago and didn’t play in Westlake’s 77-0 win over Hays. Senior Christian Edgar picked up the slack this week as he threw four touchdowns and rushed for two more in the victory.

Ranking rationale: Katy stayed undefeated with a 49-3 win over Cinco Ranch. Running back Seth Davis ended the game with 188 yards and 4 touchdowns. Davis is putting together one of the best seasons out of any Texas high school football tailback. Defensively, the most points Katy has allowed in a game this season is 21.

Ranking rationale: 2023 QB Kaden Anderson threw three TD’s in Carroll’s 63-7 win over Keller Central two weeks ago. The Dragons lost in last season’s 6A Division 1 state championship to Westlake. Carroll is once again very talented and may go on to win that crown this season.

Ranking rationale: Even without star WR/CB Travis Hunter, Collins Hill beat a talented North Gwinnett team 35-7 last week on ESPN2. 2022 QB Sam Horn, a Missouri commit, threw for 266 yards and four touchdowns in the win. The Eagles are the No. 1 team in Georgia.

Ranking rationale: Bergen Catholic’s defense once again played like one of the best units in the country in their 21-10 win over St. Joseph Montvale. Their secondary is loaded thanks to 2022 cornerback Jaeden Gould, a USC commit and Jayden Bellamy, a Notre Dame commit. Expect Bergen Catholic to finish the season undefeated. They’re the best team in New Jersey and there isn’t a particularly close No. 2.

Ranking rationale: Servite plays No. 1 Mater Dei and then No. 3 St. John Bosco to close out their regular season after dominating the first eight teams on their schedule. Buckle up!

Ranking rationale: In the game of the week in high school football across the country, Center Grove beat No. 25 Cathedral 21-6. 2022 Tennessee QB commit Tayven Jackson threw a TD and rushed for a second. Defensively, 2022 lineman Caden Curry had three tackles for loss.

Ranking rationale: Chandler beat Perry 49-3 two weeks ago. The Wolves got double digit transfers eligible to play after they had to sit out the first five games of the season. Chandler won the Open Division championship in Arizona last season and are once again the No. 1 team in the state.

Ranking rationale: Hamilton QB Nicco Marchiol is playing like the Arizona high school player of the season for the state’s No. 2 team. In last week’s 63-10 win over Desert Vista, Marchiol completed 23 of 31 passes for 333 yards and five TD’s. The West Virginia commit also rushed for a score. Hamilton plays No. 12 Chandler to end their regular season on Nov. 11.

Ranking rationale: Jesuit scored one of the upsets of the season when they beat No. 15 St. Thomas Aquinas 24-21 last month. In their 24-0 win over Jefferson, senior running back Joquez Smith rushed for 143 yards and a TD.

Ranking rationale: There are 29 two-star or better recruits in Nevada in the Class of 2022, according to 247Sports, and Bishop Gorman has 11 of them on its roster, with four-star edge rusher Cyrus Moss leading the way. The Gaels beat up Palo Verde 49-0 last week earning their fourth straight shutout.

Ranking rationale: St. Frances Academy has won five games in a row since falling to No. 15 St. Thomas Aquinas 38-23 to open their season. The Panthers have four of the top five rated 2022 recruits in Maryland on their roster, according to 247Sports.com. Linebacker Jaishawn Barham is the top ranked player.

Ranking rationale: After starting the year 0-2 but hanging tough against No. 3 St. John Bosco and No. 16 Bishop Gorman, the Rockets have won five games in a row including last week’s 45-6 demolition over Miami Edison. Central’s top player is 2022 linebacker Wesley Bissainthe.

Ranking rationale: Braylin Presley, an Oklahoma State commit, is one of the top running backs in the country and has led the Spartans to a 7-0 start. Bixby went 11-0 and won the 6A-II state championship in Oklahoma last season.

Ranking rationale: Catholic has played the toughest schedule in Louisiana by a long shot and they’re a perfect 7-0. Last week, the Bears blew out McKinley 66-6. Catholic’s top player is 2022 LSU offensive lineman commit Emery Jones. He rushed for a TD in last week’s win over McKinley.

Ranking rationale: Miami commit Isaiah Horton was named MVP as Oakland took down rival Riverdale 24-7 last week. Horton finished with six catches for 120 yards and a TD. 2022 Georgia running back commit Jordan James rushed for a TD in the game as well.

Ranking rationale: Westfield debuted in the Power 25 two weeks ago. They’re the No. 5 team in Texas after starting 7-0 with impressive wins against North Shore and Spring. 2022 Tulsa QB commit Cardell Williams is playing like one of the top QB’s in Texas.

Ranking rationale: Dutch Fork lost a lot of talent to graduation coming into the season, but the Silver Foxes have won all seven of their games by at least 29 points so far this year. Dutch Fork’s top player is 2022 receiver Antonio Williams. He’s one of the top players nationally in the 2022 recruiting class.

Ranking rationale: St. John’s debuts this week after starting the season 6-0. The Cadets’ 27-6 win over Don Bosco Prep stands out as their best victory so far this season. St. John’s top player is 2022 defensive lineman Isaiah Smith, an SMU commit.

Ranking rationale: Cathedral lost a defensive battle 21-6 to No. 11 Center Grove last week. The Fighting Irish had a tough night offensively (they didn’t score a touchdown), but remain ranked due to only losing by two scores to Center Grove and because of prior wins earlier this season against Westfield (Ind.), Brownsburg (Ind.) and La Salle (Ohio).