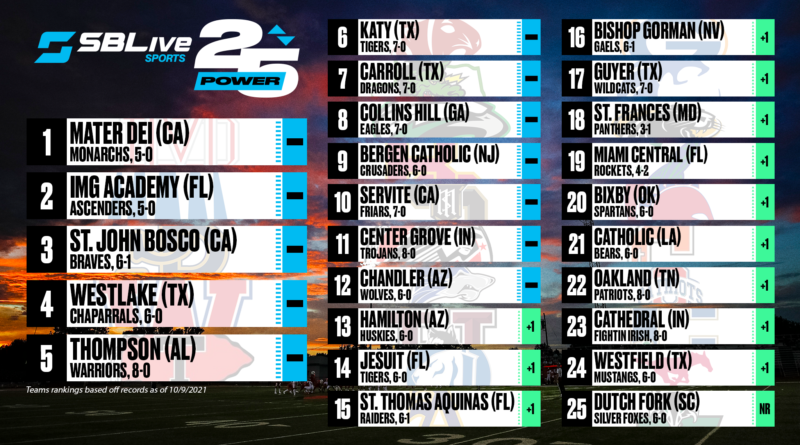 One new team enters this week’s SBLive Power 25 national high school football rankings: No. 25 Dutch Fork (Irmo, South Carolina). The Silver Foxes beat Chapin 69-21 last week to improve to 6-0. They have won all six of their games by at least 29 points so far this season.

Corner Canyon (Utah) dropped out of the rankings after losing 41-16 to Lone Peak.

Ranking rationale: St. John Bosco went into the locker room at halftime tied 21-21 with No. 1 Mater Dei two weeks ago, but two failed fourth down conversions and some punting errors in the second half resulted in a 42-21 defeat. Prior to losing to Mater Dei, St. John Bosco had rolled through their non-league schedule which included three of the top teams in the country in No. 20 Central (Fla.), East (Ill.) and Oscar Smith (Va.).

Ranking rationale: Following last year’s 6A Division 1 championship, Westlake is still the No. 1 team in Texas and they’ve been playing like it. Senior QB Cade Klubnik threw one TD and ran for a second in Westlake’s 35-0 victory over Bowie last week.

Ranking rationale: Thompson has allowed 26 points in eight games and they’re getting great quarterback play from 2022 North Carolina commit Conner Harrell. He threw three touchdowns and rushed for a fourth in Thompson’s 41-7 win over Gadsden City (Gadsden, Ala.).

Ranking rationale: Katy beat up previously undefeated district rival Tompkins 56-21 two weeks ago. Tompkins was the team Katy lost to in the regular season a year ago to end their 75 game district win streak. In the game two weeks ago, Seth Davis rushed for a 50-yard TD. Junior Caleb Koger also connected with Nic Anderson for two touchdowns in the air. Anderson is committed to Oregon. This past week, Katy beat Mayde Creek 65-7.

Ranking rationale: 2023 QB Kaden Anderson threw three TD’s in Carroll’s 63-7 win over Keller Central. The Dragons lost in last season’s 6A Division 1 state championship to Westlake. Carroll is once again very talented and may go on to win that crown this season.

Ranking rationale: Collins Hill rolled to a 63-0 win over Peachtree Ridge two weeks ago, but they unfortunately lost star receiver and cornerback Travis Hunter to a leg injury in the game. He’ll be out for four to six weeks, but may end up sitting out the rest of the season. That’s a huge loss for the Eagles, but they do still have 2022 Missouri QB commit Sam Horn in the fold.

Ranking rationale: Bergen Catholic’s defense shutout their opponent for the third straight week last week. Their secondary is loaded thanks to 2022 cornerback Jaeden Gould, a USC commit and Jayden Bellamy, a Notre Dame commit. Expect Bergen Catholic to finish the season undefeated. They’re the best team in New Jersey and there isn’t a particularly close No. 2.

Ranking rationale: Seniors Noah Fifita and Tetairoa McMillan put on a show in the Friars’ 56-12 win over Orange Lutheran two weeks ago and then senior running back Houston Thomas dominated in Servite’s 48-21 win over Santa Margarita last week scoring three touchdowns. Fifita threw five TDs with three going to McMillan two weeks ago. Fifita is committed to Arizona and McMillan is committed to Oregon. Servite is the No. 3 team in California.

Ranking rationale: Chandler beat Perry 49-3. The Wolves got double digit transfers eligible to play last week after they had to sit out the first five games of the season. Chandler won the Open Division championship in Arizona last season and are once again the No. 1 team in the state.

Ranking rationale: Hamilton survived a stiff test from Chaparral to win 35-32 last week. 2022 West Virginia QB commit Nicco Marchiol tossed three TD passes in the victory. He also rushed for a fourth score. The Huskies are 5-0 against teams from Arizona and they beat No. 16 Bishop Gorman 25-24 earlier this season.

Ranking rationale: Jesuit scored one of the upsets of the season when they beat No. 15 St. Thomas Aquinas 24-21 last month. In their 35-21 win over Clearwater Central Catholic this past week, the Tigers’ defense had five sacks.

Ranking rationale: There are 29 two-star or better recruits in Nevada in the Class of 2022, according to 247Sports, and Bishop Gorman has 11 of them on its roster, with four-star edge rusher Cyrus Moss leading the way. The Gaels beat up Legacy 62-0 last week earning their second straight shutout.

Ranking rationale: Star 2023 Guyer QB Jackson Arnold has had a great start to the year for Guyer. The Wildcats are the No. 4 team in Texas thanks to recording wins over Ryan and Atascocita.

Ranking rationale: St. Frances Academy picked up an impressive away win against De La Salle, one of the top teams in Northern California, two weeks ago. In their 42-28 win, sophomore quarterback Michael Van Buren threw four first half TDs. He finished the night with 241 yards on 16-of-19 passing. De La Salle fought back in the second half, but St. Frances Academy was too tough.

Ranking rationale: After starting the year 0-2 but hanging tough against No. 3 St. John Bosco and No. 16 Bishop Gorman, the Rockets have won four in a row including last week’s 56-0 demolition over Hialeah-Miami Lakes. Central’s top player is 2022 linebacker Wesley Bissainthe.

Ranking rationale: Braylin Presley, an Oklahoma State commit, is one of the top running backs in the country and has led the Spartans to a 6-0 start. Bixby went 11-0 and won the 6A-II state championship in Oklahoma last season.

“For those that did not see this one you missed one heck of a football game”, Oakland head coach Kevin Creasy told wgnsradio.com postgame. “Our guys fought back and found a way against a great team. This was a total team effort and we really responded in the second half. It was a great statement for Oakland football.”

Ranking rationale: 2024 QB Danny O’Neil continued his strong season in Cathedral’s 35-7 win over La Salle two weeks ago. He threw for 347 yards and four touchdown passes. Last week, he threw four more TD passes in a 45-21 win over Brebeuf Jesuit Preparatory. The Fighting Irish finished the 2020 high school football season ranked No. 23 in the Power 25 and for the third straight week they’re back in the rankings in 2021.

Ranking rationale: Westfield debuted last week. They’re the No. 5 team in Texas after starting 6-0 with impressive wins against North Shore and Spring. 2022 Tulsa QB commit Cardell Williams is playing like one of the top QB’s in Texas.

Ranking rationale: Dutch Fork lost a lot of talent to graduation coming into the season, but the Silver Foxes have won all six of their games by at least 29 points so far this year. Dutch Fork’s top player is 2022 receiver Antonio Williams. He’s one of the top players nationally in the 2022 recruiting class.