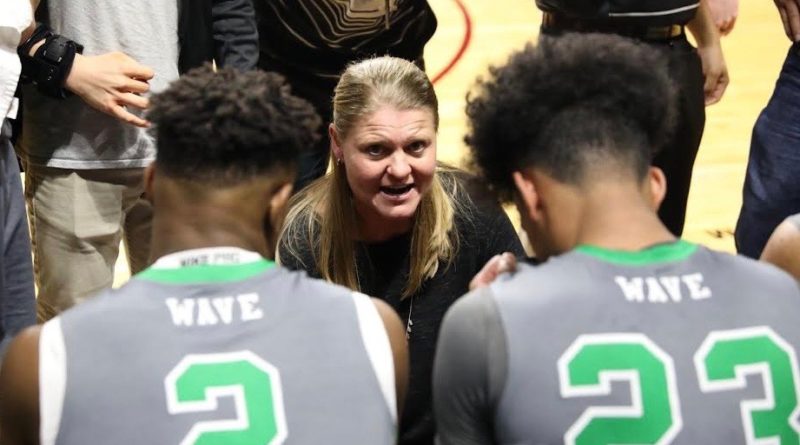 Chelle Dalager sees herself less as a breaking-down-barriers pioneer – and more as a boys basketball coach who “still hates fund-raising.”

And she is comfortable right where she’s at – Churchill County High School in Fallon, Nevada.

Once a star guard at Yelm High School (Wash.), Dalager not only became the first woman hired to coach boys basketball in Nevada, she has led the Greenwave to back-to-back Class 3A championships (2019, 2020).

“It’s been a pretty cool thing for the city of Fallon,” said Dalager, 50. “And everywhere I go, people are super awesome. They tell me, ‘We watch your games!’ There is a lot of support from everyone.”

After leading Yelm to its first WIAA state tournament as a player (1987-88), Dalager spent two seasons in junior college (Pierce College in Lakewood, WA) before finishing up her career at Sheldon Jackson College, an NAIA program in Alaska.

All those hours spent on a basketball court made Dalager realize one important thing: She wanted to coach.

So after she took on a student-teaching position in Fallon (which later led to a full-time PE job), she began coaching in area youth basketball leagues.

In 1997, Dalager took on her first high school position as the girls varsity coach at Churchill County, spending 14 seasons at the helm.

After resigning in 2011, when Dalager became more involved coaching her boys’ reservation-ball travel leagues, friend Tommy Thomson asked if she wanted to help out as an assistant on the Churchill County boys junior varsity squad.

“I was able to coach our sons on days we had ‘Rez Ball’ games on Saturday, and then come back and coaching half of the games (at Churchill County),” Dalager said. “It worked out well on the schedule.”

After three seasons, she was promoted to lead the JV program. And after Brad Barton departed as the varsity boys coach following the 2017 season, Dalager was hired to replace him.

One of Dalager’s selling points in the interview to athletic director Brad Daum (also a former girls assistant) was that she had coached this upcoming talented group all through elementary school and junior high during travel ball.

“I was, ‘Coach Chelle’ to them, so it wasn’t a big deal,” Dalager said. “And the parents were awesome, too.”

From the get-go, Dalager demonstrated she could not only lead a boys program – she could win games, too.

After just missing the state tournament in her first season in 2017-18, Churchill County returned much of its group the next season, including Hayden and Avery Strasdin, the sons of Tricia Strasdin – Dalager’s life partner.

Dalager called it “the most talented team I have ever coached” – one that probably should not have gotten out of the regional round.

The Greenwave trailed Lowry by six points with 15 seconds to go – but furiously rallied for a 60-59 overtime victory to earn their first state berth since 1989.

“Best thing about kids is they like consistency – and they work well with consistency,” Lowry boys coach Chad Peters said. “And Chelle has been consistent.”

And that set the table for a run of dramatic wins in the 3A championships, including the ending of the 2019 state championship game against Northern League rival Elko, which had handed Churchill County all three of its losses during the season.

But in a championship game that came down to the wire, it was Greenwave standout Elijah Jackson who hit the game-winning 3-pointer at the buzzer to complete what Dalager called a “Cinderella season.”

“There was something that was really calm about that team,” Dalager said.

A year later, Jackson returned to become the school’s all-time leading scorer – and Avery was a junior combo guard whose last-second shot netted the Greenwave the 2020 regional title.

Again, it all came down to a state-championship rematch between Churchill County and Elko. And the same ending played out – Jackson (now at Southern Oregon University) sank the game-winning shot to win the 3A title.

“When I watch those highlight films, it brings me to tears every time,” Dalager said.

Last year, the Greenwave had eight returning seniors, including Avery. But the season was canceled because of COVID-19 pandemic concerns.

Technically, Churchill County is still the reigning two-time 3A champions, even though the program is headed for a rebuilding year this winter with one returner with varsity playing experience.

“But we really have a talented group,” Dalager said.

With her boys now off to college, Dalager has settled into a life in Fallon – a big farming community that reminds her a lot of where she grew up in Yelm. The school is also five miles away from Naval Air Station Fallon where the original “Top Gun” was filmed in the 1980s.

How long will she continue to coach – especially with another promising group of boys coming into the program?

(All photos courtesy of Chelle Dalager)