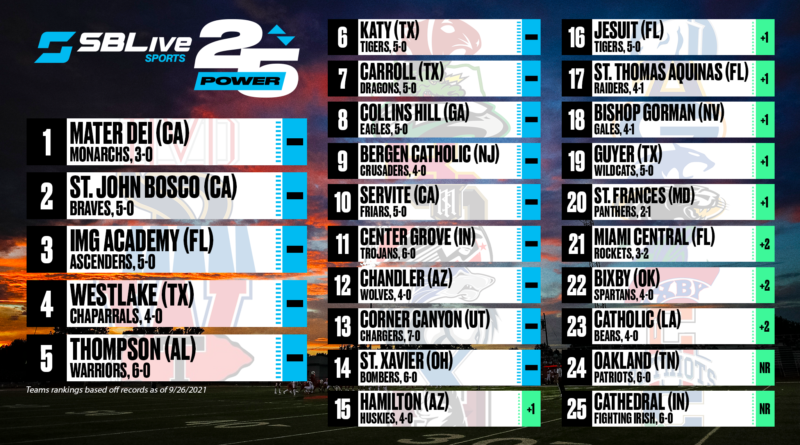 No. 1 Mater Dei and No. 2 St. John Bosco continue to hold the top two spots in our rankings as they prepare to play each other Friday in what is the national game of the week – and arguably the biggest game of the year.

Ranking rationale: Mater Dei is 2-0 against out of state opponents and 3-0 overall. They’ve beaten Duncanville (Texas) and Liberty (Nevada) by a combined score of 94-10. In their 49-7 win over Liberty, sophomore QB Elijah Brown completed 15 of 16 passes for 213 yards and two touchdowns. Last week, the Monarchs rolled over La Mirada 58-7. This week, they travel to take on No. 2 St. John Bosco.

Ranking rationale: St. John Bosco dominated Oscar Smith 49-0 on the road to improve to 5-0. They’ve beaten three of the top teams in the country in No. 21 Miami Central, East St. Louis and Oscar Smith.

Ranking rationale: Thompson has allowed 12 points in six games. Star quarterback Conner Harrell is now a senior after leading last year’s state title team and Thompson has also added some key transfers, which gives them a chance to be even better than last year’s undefeated team. Harrell threw two TD passes in the Warriors’ 51-0 win over Mountain Brook.

Ranking rationale: As they’ve done for most of the season, Katy used good defense and their strong running game to beat Seven Lakes 45-3. The Tigers have one of the top defenses in the country led by Texas A&M defensive lineman commit Malick Sylla. Katy has had to deal with a fair share of injuries so far this season though.

Ranking rationale: Carroll junior running back Owen Allen accounted for the first four touchdowns in Friday’s win over Byron Nelson and the Dragons’ secondary intercepted four passes in the game. Carroll, last year’s 6A runners up, has started this season very strong.

Ranking rationale: Collins Hill dominated East Cowetta winning 34-0. 2022 Missouri commit Sam Horn was surgical completing 30 of 36 passes for 323 yards and two touchdowns. 2022 Florida State commit Travis Hunter, the consensus No. 1 player in the country, caught one of the TDs. Collins Hill is the No. 1 ranked team in Georgia.

Ranking rationale: Bergen Catholic is loaded with talent and they’ve showed it through their first four games. Their top players are 2022 cornerback Jaeden Gould, a USC commit, 2022 cornerback Jayden Bellamy, a Notre Dame commit, and 2022 QB Steve Angeli, a Notre Dame commit. Gould intercepted a pass in Bergen Catholic’s 17-0 win over Don Bosco Prep. The Crusaders held Don Bosco Prep to only 157 yards of offense in the game.

Ranking rationale: In Servite’s 42-7 win over Helix, senior Oregon commit Tetairoa McMillan had seven catches for 185 yards and three touchdowns. He caught all three of the TDs in the first quarter.

Ranking rationale: 2021 Center Grove might be better than 2020 14-0 Center Grove. In their Week 6 win, the Trojans rushed for five TDs and pitched a shutout defensively. Their top players are 2022 Tennessee QB commit Tayven Jackson and 2022 defensive lineman Caden Curry. Curry rushed for two of the touchdowns in Friday’s victory in addition to playing defense.

Ranking rationale: Chandler beat Liberty 41-21. Senior QB Blaine Hipa threw three TDs in the win. Chandler won the Open Division championship in Arizona last season and are once again the No. 1 team in the state.

Ranking rationale: Corner Canyon picked up their best win of the season, 38-23 over Skyridge on Friday. 2022 USC QB commit Devin Brown threw four TDs, but was intercepted twice and completed just 49% of his passes. Skyridge is the No. 2 team in Utah and they competed with Corner Canyon for most of the night, but in the end the Chargers won their 47th straight game.

Ranking rationale: St. Xavier won the Division 1 title in Ohio last season and the Bombers are the top-ranked team in the state in 2021. Last week they beat Elder 52-14.

Ranking rationale: Jesuit scored one of the upsets of the season when they beat No. 18 St. Thomas Aquinas 24-21 earlier this month. In last week’s 35-13 win over Plant City, junior running back Joquez Smith rushed for 110 yards and four TDs. He’s received six scholarship offers, per 247Sports.com.

Ranking rationale: There are 29 two-star or better recruits in Nevada in the Class of 2022, according to 247Sports, and Bishop Gorman has 11 of them on its roster, with four-star edge rusher Cyrus Moss leading the way. The Gaels have a lot of talent and bounced back from their shocking defeat to No. 15 Hamilton last week with a 52-0 demolition of Arbor View. William ‘Bubba’ Proctor IV rushed for two TDs in the win.

Ranking rationale: 2023 QB Jackson Arnold, one of the top signal callers in Texas, accounted for 369 yards of offense and three TDs in Guyer’s 44-26 win over McKinney. McKinney pushed Guyer for 36 minutes in the game, but ultimately came up short against the No. 4 team in Texas.

Ranking rationale: St. Frances Academy returned to the Power 25 last week. They lost to No. 17 St. Thomas Aquinas 38-23 on August 28th, but have won two straight games in convincing fashion since. Five of the top six 2022 football recruits from Maryland attend St. Frances, per 247Sports.com. The top-ranked recruit in the 2022 class at St. Frances is linebacker Jaishawn Barham.

Ranking rationale: After starting the year 0-2 but hanging tough against No. 2 St. John Bosco and No. 18 Bishop Gorman, the Rockets have won three in a row. Central’s top player is 2022 linebacker Wesley Bissainthe.

Ranking rationale: Braylin Presley, an Oklahoma State commit, is one of the top running backs in the country and has led the Spartans to a 4-0 start. He rushed for 113 yards and two TDs in Bixby’s 71-0 win over Bartlesville last week. Bixby went 11-0 and won the 6A-II state championship in Oklahoma last season.

Ranking rationale: Oakland is the top team in Tennessee and debuts this week after beating the state’s No. 2 team, Lipscomb Academy, 29-21. Senior tailback Jordan James rushed for almost 200 yards in the win. He’s committed to Georgia.

Ranking rationale: Cathedral debuts this week following their 6-0 start. The Fighting Irish finished the 2020 high school football season ranked No. 23 in the Power 25. In 2021, Cathedral has recorded three shutouts and won every game they’ve played by at least two scores. 2024 QB Danny O’Neil has had a great start to the season for Cathedral throwing 11 TDs and zero interceptions.