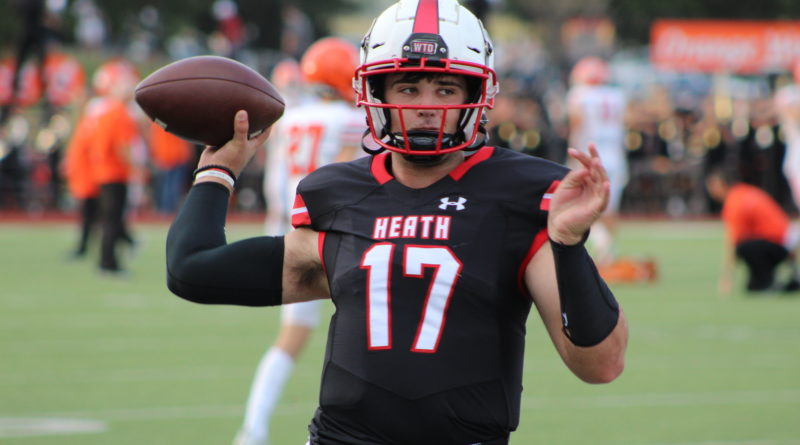 ROCKWALL, Texas — When Rockwall Heath needed a score to stay in the game, there was little doubt who would get the ball among the thousands gathered at a sold-out Wilkerson-Sanders Memorial Stadium.

The Hawks lined up in the shadow of the goalpost needing a score on the first possession of double overtime to keep their chances of a victory over crosstown rival Rockwall alive.

Heath running back Zach Evans looked at the home sideline and pointed to himself, pounding his chest. The senior tucked a handoff, cut left and somersaulted over two opposing defenders into the end zone for his sixth touchdown of the night.

“From the second I stepped onto the field (tonight), I knew,” Evans, a Minnesota commit, said. “I had to win this game for me and my team. We had to do it for the city.”

The Hawks offense stayed on the field to go for two after Evans’ score and got it thanks to a quick pass from senior quarterback Josh Hoover to senior tight end Lance Mason.

A few players later, sophomore defensive back Drew Smith snagged the game-ending interception to secure a 79-71 double-overtime victory for Heath over the Yellowjackets in an exhilarating, back-and-forth edition of the I-30 Classic on Friday night in Rockwall.

“It was absolutely insane,” Hoover, an Indiana commit, said. “It was loud and I couldn’t believe it there for a minute with everything that happened. I’m just so proud of the way we kept fighting through adversity and responded when they did things well. I couldn’t be prouder of the guys.”

“This is why you play the game: the I-30 rivalry with a ton of fans and a great atmosphere,” Rockwall senior quarterback and Mississippi State commit Braedyn Locke said. “The ball didn’t bounce our way, but it is what it is. We’ve got a great team and they do too, but you’ll be seeing us in the playoffs.”

Rockwall and Rockwall Heath — the ninth and 13th-ranked squads in SBLive’s Texas Top 50 rankings, respectively, entering the weekend — each flexed their offensive muscle early in a game that appeared destined to develop into a shootout.

Heath got the scoring started on Evans’ first touchdown run of the night from 15 yards out, but Rockwall responded quickly on a short touchdown run by junior running back Zach Hernandez and successfully recovered an onside kick afterward to spark another touchdown drive.

The Hawks and Yellowjackets combined for six touchdowns during the opening quarter and raced into the second tied at 21-21. The two teams ultimately tied it up on seven different occasions and traded leads eight times throughout the night.

“We’ve been here before,” Hoover said. “That experience told us to hang in there and it would work out. We had to keep fighting, keep pressing and I was convinced that we were going to prevail.”

Rockwall broke out the first of several trick plays that led directly to points during the first half.

The Yellowjackets also scored late in the game on a 21-yard jump-pass touchdown throw from Lake Bennett to Brennan Ray and again on a double-reverse run from inside the red zone.

But Hoover started strutting his stuff during the second quarter by hooking up with senior receivers Jordan Nabors, a Baylor commit, and Jay Fair, an Auburn commit, on deep touchdown throws of 70 and 69 yards, respectively.

Those two long throws helped Hoover and the Hawks carry a 35-28 advantage into the locker room at halftime and reel off three unanswered touchdowns to take a 21-point lead, the largest for either side all night.

“We work, we work and we work. Practice is really big to us,” Hoover said. “I love those guys. They work so hard to get it right, and I’m so proud of those guys.”

The second half, however, was dominated by Locke and Evans.

Locke and the Yellowjackets came storming back by scoring four of the game’s next five touchdowns and successfully retook a 57-56 lead courtesy of a two-point conversion pass from Locke to Marshall with 2 minutes and 15 seconds left to play.

That’s when Evans started to really assert himself.

The Hawks’ bruising back put the team on his back throughout the fourth quarter and overtime, shredding Rockwall’s defense on the ground time and time again and helped Heath drive nearly the length of the field with time running out.

Hoover finished what Evans started by firing a 21-yard touchdown pass to Lance Mason with 18 seconds on the clock to move ahead 64-57 after a two-point conversion succeeded.

But improbably with no timeouts, Locke drove Rockwall more than 80 yards downfield on two plays and sent the game to overtime with a miraculous bobbled 51-yard Hail Mary pass saved on a diving catch by Meeks in the end zone with 2 seconds left in regulation.

“We come out every week and practice hard,” Locke said. “We know we only get one chance at it and we have guys that do a great job. Those things can happen when you’ve got guys who pay attention to detail and come every day ready to work.”

Evans cemented the victory for the Hawks in OT by running in his final two touchdowns of the night to finish with a game-high 270 yards and six scores off 33 carries on the ground. He, Hoover and their senior teammates also secured their first career victories over Rockwall in the I-30 Classic.

“In my opinion, that was Zach’s best game that he’s ever played,” Hoover said. “The way that he ran it, his vision, his physicality and then at the end, he ran over those two guys and scored. I couldn’t be more proud of Zach, he’s a changed dude. He wasn’t like this last year; he’s a different guy now and I’m so proud of him.”

Locke ended his night with a game-high 412 passing yards, three passing touchdowns and a rushing score on 20-of-33 passing, while Marshall (10 receptions, 258 yards, two TDs) and Meeks (Five receptions, 94 yards, 3 TDs) in receiving.

Rockwall’s Hernandez ran for 260 yards and a touchdown on 55 rush attempts, while Heath’s Brittan Snider rushed 21 times for 119 yards and a score.

Hoover finished with 365 yards and four touchdowns on 16-of-26 passing and tacked on a rushing touchdown too. Nabors and Fair each surpassed 100 receiving yards on the night and combined for 161 yards and a pair of touchdowns on nine catches.

“They’ve got a good (quarterback) over there and we’ve got a good one over here,” Locke said. “Every year it’s been fun to get out there and compete against those guys. It’s a friendly-unfriendly rivalry, but this is why you play the game.”

The victory lifts Rockwall Heath to 4-1 overall and gives the team a win in its District 10-6A opener. The Hawks will look to keep rolling when they travel to face Mesquite Horn (1-3, 1-0) at 7 p.m. Friday.

Rockwall, meanwhile, drops its second straight game after a 3-0 start. The Yellowjackets will try to rebound in their return to action against Mesquite (3-2, 1-0) at the same time at Rockwall’s Wilkerson-Sanders Memorial Stadium.

“This means everything. The last four years we haven’t been able to win (this game), but this year we did. I think the team just fought hard,” Evans said.

“(A game like this) shows the talent down here in Texas, especially in Rockwall. It’s crazy. It was blow-for-blow and recruit-for-recruit just going after it. This is No. 1, definitely (my) No. 1 moment (at Heath).”