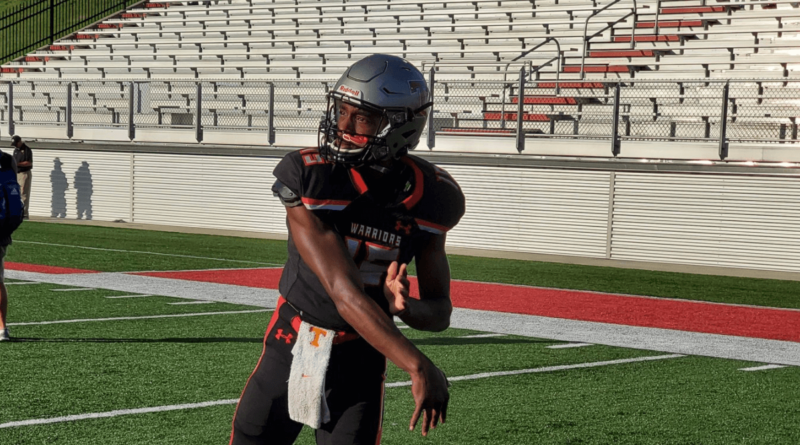 Here’s a closer look at the top high school football games from around the country being played Thursday and Friday with an emphasis on what their results mean for the Power 25.

The winning team here will stay on the Power 25 radar. Ryan’s Austin Jordan, a 2022 Texas safety commit, is the top player in this game.

2022 Oakland running back Jordan James is committed to Georgia. 2022 Lipscomb Academy QB Luther Richesson has received five scholarship offers. The winner of this game has a solid chance to make next week’s Power 25.

Expect Thompson to win big like they have all season, but Mountain Brook is a top ten team in Alabama.

Chandler beat Liberty 44-10 a year ago. Have the Lions closed the gap with the state’s top team?

Skyridge is one of the main challengers standing in Corner Canyon’s way of a four-peat state championship run. Corner Canyon won this game by a field goal, 29-26 last season. 2022 USC QB commit Devin Brown will need to keep his eyes out for 2023 Skyview defensive lineman Tausili Akana.

After beating American Heritage, can Treasure Coast once again beat one of the top teams in the Sunshine State in Cocoa?

Catholic is the top team in Louisiana. They need to win this matchup to stay in next week’s Power 25.

Look out for lots of offense in this one thanks to Rockwall QB Braedyn Locke, a Mississippi State commit, and Rockwall-Heath QB Josh Hoover, an Indiana commit. The winning team will stay on our Power 25 radar.

Valor Christian has already easily beaten two out of state opponents and they’re the top team in Colorado. A win against Columbine will keep the Eagles on our radar.

Mill Creek is currently playing like the No. 2 team in Georgia. Grayson are the defending state champs, but look like they’ve taken a step back from where they were a year ago, so this a must win for Mill Creek from a national rankings perspective. 2023 athlete Caleb Downs is one of the top players in the country and a big reason why Mill Creek has started the year so well.

Lee County is loaded with Power 5 talent led by 2022 Georgia Tech linebacker commit Jaron Willis. A win could put the Trojans in the Power 25 next week.

St. Peter’s Prep is the No. 2 team in New Jersey led by 2022 defensive lineman KJ Miles, a Georgia Tech commit. It will most likely take a win against Bergen Catholic on October 30th to make the Power 25, but if the Marauders continue to stack up victories they could be considered before then. DePaul Catholic’s top player is Q’yaeir Price, a defensive lineman who’s committed to Syracuse.

Chambers has a great defensive line. James Pearce and Jalen Swindell, a Wake Forest commit, are the top players in the Cougars’ front seven. Hough’s top player is Curtis Neal, a 2022 Wisconsin defensive lineman commit. If the winner of this game finishes the year undefeated, they’ll have a solid shot at making the Power 25 come the end of the season.

Booker T. Washington needs to win this game to stay on the Power 25 radar. Their top player is 2022 cornerback Gentry Williams, a consensus top 100 recruit in the country.

This is big game for Archbishop Spaulding to see how they stack up nationally. Gonzaga is a good team, but they lost to St. Joseph’s Prep 35-3 last week. If the Cavaliers can pull off a win, especially by a large margin, they’ll show they’re clearly one of the top teams in the country. Archbishop Spaulding’s top player is 2022 CB Mansoor Delane, a Virginia Tech commit.