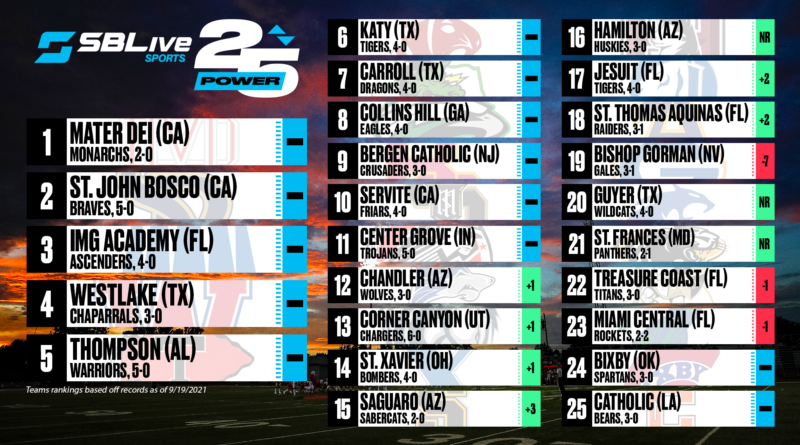 After an incredible comeback win against No. 19 Bishop Gorman (Nevada), No. 16 Hamilton (Arizona) makes its 2021 debut in this week’s SBLive Power 25 national high school football rankings.

The two other new additions this week include No. 20 Guyer (Denton, Texas) and No. 21 St. Frances Academy (Maryland).

Ranking rationale: Mater Dei is 2-0 against out of state opponents. They’ve beaten Duncanville (Texas) and Liberty (Nevada) by a combined score of 94-10. In their 49-7 win over Liberty, sophomore QB Elijah Brown completed 15 of 16 passes for 213 yards and two touchdowns.

Ranking rationale: St. John Bosco dominated Oscar Smith 49-0 on the road to improve to 5-0. They’ve beaten three of the top teams in the country in No. 23 Miami Central, East St. Louis and Oscar Smith.

Ranking rationale: The Ascenders beat up a good Jones team 62-3. 2022 Clemson commit Jihaad Campbell returned a fumble 87-yards for a touchdown in the victory.

Last result: 42-9 win over Hewitt-Trussville (Ala.)

Ranking rationale: Thompson has allowed 12 points in five games, with nine of them coming in last week’s 42-9 win over a very talented Hewitt-Trussville team. Star quarterback Conner Harrell is now a senior after leading last year’s state title team and Thompson has also added some key transfers, which gives them a chance to be even better than last year’s undefeated team.

Ranking rationale: As they’ve done for most of the season, Katy used good defense and their strong running game to beat The Woodlands 21-14. Junior Seth Davis rushed for 224 yards and two touchdowns. The Tigers have one of the top defenses in the country led by Texas A&M defensive lineman commit Malick Sylla. Katy has had to deal with a fair share of injuries so far this season though.

Ranking rationale: Junior running back Owen Allen rushed for 161 yards and two touchdowns and the Carroll defense held Martin to seven points in their 31-7 win last week. Carroll, last year’s 6A runners up, have started this season very strong.

Ranking rationale: Collins Hill dominated Alpharetta winning 42-0. 2022 Missouri commit Sam Horn passed for 191 yards and four TDs in the victory. 2022 Florida State commit Travis Hunter, the consensus No. 1 player in the country, caught one of the TDs. Collins Hill is the No. 1 ranked team in Georgia.

Ranking rationale: Bergen Catholic is loaded with talent and they’ve showed it through their first three games. Their top players are 2022 cornerback Jaeden Gould, a USC commit, 2022 cornerback Jayden Bellamy, a Notre Dame commit, and 2022 QB Steve Angeli, a Notre Dame commit. It was senior running back Ryan Butler that stole the show against Delbarton last week though. He rushed for 176 yards and four TDs. He’s committed to Princeton.

Ranking rationale: The most impressive part of Servite’s 44-22 win against Sierra Canyon last Friday was that the Friars held the Trailblazers scoreless on offense in the second half on just six plays from scrimmage. Sierra Canyon had only two offensive possessions in the third and fourth quarters and went three and out on both series. Offensively for Servite, Arizona commit Noah Fifita rushed for two scores and passed for two more.

Ranking rationale: Chandler started slow against O’Connor but rallied to win 36-14 last week. Senior QB Blaine Hipa threw five TDs in the win, but was also intercepted twice. Chandler won the Open Division championship in Arizona last season and are once again the No. 1 team in the state.

Ranking rationale: St. Xavier won the Division 1 title in Ohio last season and the Bombers are the top-ranked team in the state in 2021. Last week they beat previously undefeated Archbishop Moeller 49-16.

St. Xavier convincingly handled Moeller from the jump, as the Bombers controlled all three phases of the game. Leading the way was senior running back Charles Kellom, who finished with 282 total yards and three touchdowns.

“My O-line was doing an amazing job creating holes,” Kellom said after a 216-yard rushing game with three touchdowns on 37 carries.

Ranking rationale: Saguaro will be a surprise team in Arizona this season. The Sabercats have a shot at unseating five-time reigning state champion Chandler thanks to six impact transfers. Tristan Monday, an Arizona commit, is one of the team’s top defensive players.

Ranking rationale: Hamilton appeared to have no shot as they trailed No. 19 Bishop Gorman 24-7 with 1:07 to play on Friday, but the Huskies rallied to score 18 points thanks to a field goal, two successful onside kicks, two touchdowns and then a last second two point conversion to win 25-24. 2022 West Virginia QB commit Nicco Marchiol dove for the pylon to secure the two points needed to win the game with eight seconds to play after throwing a TD pass. The win pushes Hamilton, last year’s runners up in the Open Division in Arizona, into the Power 25.

Ranking rationale: Jesuit scored one of the upsets of the season when they beat No. 18 St. Thomas Aquinas 24-21 three weeks ago. In last week’s 28-7 win over Hillsborough, sophomore QB Luke Knight tossed three touchdown passes.

Ranking rationale: There are 29 two-star or better recruits in Nevada in the Class of 2022, according to 247Sports, and Bishop Gorman has 11 of them on its roster, with four-star edge rusher Cyrus Moss leading the way. The Gaels have a lot of talent, but that didn’t stop them from blowing a 17 point lead with 1:07 to play against Hamilton last week.

Ranking rationale: Guyer recorded an impressive win against Atascocita, last week’s No. 23 team, to move into this week’s rankings. The score was tied 14-14 at the break, but the Wildcats had big second half and eventually won 46-35. 2023 QB Jackson Arnold, one of the top signal callers in Texas, hit Grayson O’Bara on a 50-yard TD to give Guyer a 28-27 lead and from there they never looked back.

Ranking rationale: St. Frances Academy is back in this week’s rankings following two blowout wins after losing to No. 18 St. Thomas Aquinas 38-23 on August 28th. Five of the top six 2022 football recruits from Maryland attend St. Frances, per 247Sports.com. The top-ranked recruit in the 2022 class at St. Frances is linebacker Jaishawn Barham.

Ranking rationale: Eden James, the son of Edgerrin James, rushed for 267 yards and two touchdowns leading his Treasure Coast team to a huge upset win over American Heritage, a preseason top 10 Power 25 team, in their first game of the season. In their two games since, Treasure Coast has won two blowouts.

Ranking rationale: After starting the year 0-2 but hanging tough against No. 2 St. John Bosco and No. 19 Bishop Gorman, the Rockets beat up on Booker T. Washington to record their first win two weeks ago and last week they beat Miami Springs 55-0. Central’s top player is 2022 linebacker Wesley Bissainthe.

Ranking rationale: Braylin Presley, an Oklahoma State commit, is one of the top running backs in the country and has led the Spartans to a 3-0 start. He rushed for 233 yards and three TDs in Bixby’s win against Stillwater last week. Bixby went 11-0 and won the 6A-II state championship in Oklahoma last season.