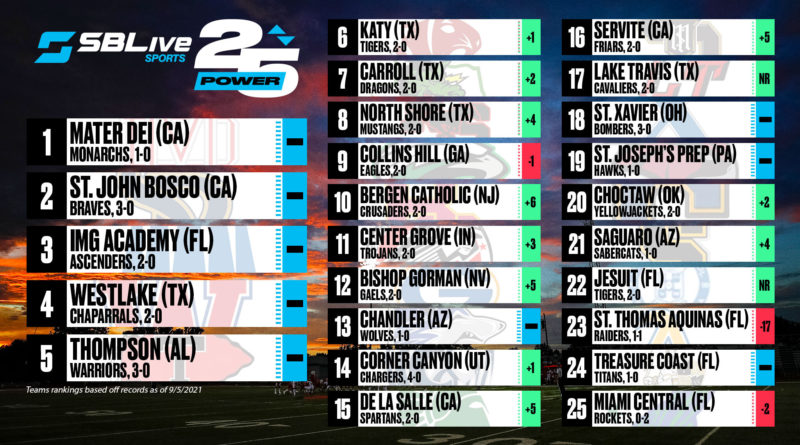 Get the complete breakdown of the Power 25 rankings below.

Ranking rationale: Mater Dei went to Texas and dominated from the opening kickoff en route to a 45-3 win over Duncanville in their opener. USC commit Domani Jackson had a pick-six on Duncanville’s first pass attempt and on the Monarchs first play on offense, Oklahoma running back commit Raleek Brown scored a 75-yard touchdown. The Monarchs did suffer some bad news this week: Jackson will miss the rest of the season with a knee injury, the school announced.

Ranking rationale: The Ascenders have won their opening two games by a a combined 116-7 score.

Ranking rationale: Thompson hasn’t allowed a point in three games. Star quarterback Conner Harrell is now a senior after leading last year’s state title team and Thompson has also added some key transfers, which gives them a chance to be even better than last year’s undefeated team.

Ranking rationale: Last year’s 6A Division 2 Texas champions bring back a loaded defense as well as junior quarterback Caleb Koger this season. Through two games, the Tigers have given up 14 total points.

Ranking rationale: Carroll needed to block a field goal late to secure their win over Rockwall-Heath. They scored 19 unanswered points in the the victory. Kaden Anderson connected with senior wideout Landon Sampson, a South Carolina football commit, on a huge 70-yard touchdown pass on third and long for Carroll’s first touchdown of the night. He was terrific in crucial third and fourth-down situations, routinely finding Allen, Sampson and tight end RJ Maryland — a Boston College commit — to extend drives and chip away at Heath’s lead.

Ranking rationale: North Shore is once again one of the top teams in Texas. Senior Kent Battle had a pick-six in the Mustangs’ win over Klein-Collins.

Ranking rationale: Collins Hill and Greenville Christian (Mississippi) were neck and neck until Collins Hill outscored them 21-8 in the fourth quarter and remained undefeated. Collins Hill has the most electric QB/WR combo in the nation in Sam Horn, a Missouri commit, and Travis Hunter, a Florida State commit. Hunter is the unanimous No. 1 player in the 2022 class.

Ranking rationale: 2021 Center Grove might be better than 2020 14-0 Center Grove. In their Week 3 win, the Trojans rushed for five TDs. Drew Wheat and Daniel Weems each rushed for two scores each.

Ranking rationale: Bishop Gorman went to Florida and beat No. 25 Miami Central 21-20. Sophomore QB Micah Alejado led the Gaels on an 80 yard TD drive in four plays to secure the victory. He hit Zachariah Branch for a 37-yard touchdown pass to give Gorman a 21-20 lead with 4:02 to play.

Ranking rationale: The Friars have one of the best offenses in the country and that was on full display in their win against Mission Viejo, but their defense also played extremely well last Thursday. Corner Mike Hurst had an interception in the win.

Ranking rationale: Lake Travis debuts this week thanks to an impressive 52-20 win over Judson. The Cavaliers dominated the line of scrimmage in the win despite a ferocious Judson pass rush. Lake Travis was able to gain a greater and greater push off the line as the game progressed, which opened up the rushing attack for sophomore back Nico Hamilton.

Ranking rationale: St. Xavier won the Division 1 title in Ohio last season and the Bombers are the top-ranked team in the state to begin the 2021 season. They led Olentangy Liberty 42-0 in the first half on Friday which led to a running clock.

Ranking rationale: 2023 QB Steele Wasel is a star in the making for Choctaw. The Yellowjackets finished last season as the No. 2 team in Oklahoma, but this year they should end the season at No. 1 thanks to bringing back a lot of impact players. Through two games, Choctaw is outscoring opponents 129-3.

Ranking rationale: Saguaro will be a surprise team in Arizona this season. The Sabercats have a shot at unseating five-time reigning state champion Chandler thanks to six impact transfers. Tristan Monday, an Arizona commit, recorded a sack and four tackles in Saguaro’s 63-0 win against McClintock.

Ranking rationale: St. Thomas Aquinas is loaded with Division 1 talent but the Raiders were upset by Jesuit a week after beating a very good St. Frances (Baltimore, Md.) team 38-23.

Ranking rationale: Central is 0-2 but they’ve played two of the best teams in the country in No. 2 St. John Bosco and No. 12 Bishop Gorman and hung tough so they stay in this week’s rankings.